No Wonder Israel's Weather is so Confusing.

No wonder our weather is so confusing...

From Saturday afternoon to a rainy and blustery day in fear expecting
10/12/2010 09:31:18 Today will be partly cloudy in the afternoon will breed local rain clouds in northern Israel fell. The temperature fell slightly. Mediterranean waves waves to her back. Wave height 50-130 cm high sea temperature 23 degrees. Southwest winds mild to moderate they would awake evening.

Saturday will be rainy and windy afternoon. The rains begin in the north, center and spread in the afternoon. Partly cloudy in the northern Negev will be your father, southwest winds waking up strong. Snow will begin after midnight on Mount Hermon.

Sunday will be rainy and windy from the north to the northern Negev. Southwest winds up to intense turbulent Mediterranean Sea will be rough to rough. Height of waves up to 7 meters. Rain and thunderstorms will be accompanied by hail and thunder storms. Feared expect low places in the streams flood the valley. Hermon would take place Snow storms. during the day may have light snow in the northern Golan Heights.

On Tuesday, a slight increase in temperature will apply a local rain will fall mainly in North and South and Central will be partly cloudy. Southwest winds moderate.

On Wednesday, another slight increase will apply to temperature, it will be cloudy to overcast. On the same temperature will be evident partly cloudy to clear. Day and apply a slight decrease in temperature and winds strengthen. Rain fell from time to time a local rain fell in North Center. South will be partly cloudy.

In case it gets taken down, here's the screen snapshot. 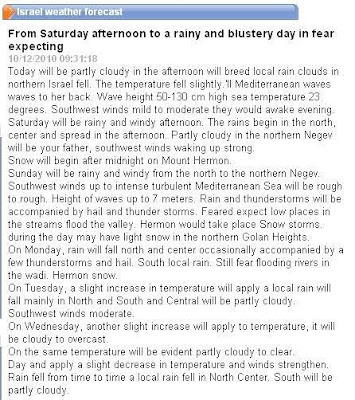 as if there aren't enough Olim from America who can review everything that goes to print and correct all the mistakes!

Translate auto it was.

that was painful to read.

I guess I won't be going out of business any time soon (I'm a translator).

Here's the website of the real Israeli weather service:
http://www.ims.gov.il/IMSENG/All_Tahazit/homepage.htm

G-d listens! Perhaps the repentance of the people and their prayers did a world of good!

Nothing in life happens by mere chance or coincidence. The world and us - would not exist without His Mercy.

Israel has much to thankful for even though this Hanukkah is already a part of history.