Halutz declared his intention in the past to join the political arena and compete for a place in the Knesset. (Attila Somfalvi) 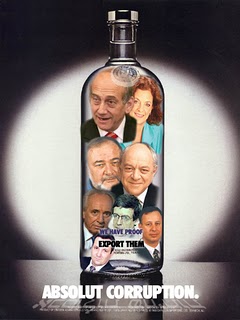 Halutz, the ex-Chief of Staff who brazenly lead the IDF's less-than-stellar performance in the Second Lebanon War, and who ran to sell his stock portfolio at the start of the war (instead of being in the command center) has joined the party of winners; Kadima.

Some of their impressive top starring members include:

Ehud Olmert (Kadima): former PM, Dozens of criminal charges have been filed against him. All currently in court. Resigned in shame.

Tzachi HaNegbi (Kadima): Convicted of Perjury, a crime with moral turpitude. He's now trying to improve Israel's society, by running for CEO of a company that wants to bring legalized gambling to Eilat and Arad.

I wanted to join Kadima, there was a form with basic questions like "Name", "ID Number", "Address", and then it said "Do you have a criminal record".

It seems that a criminal record is now a requirement to join Kadima .... :)

Why doesn't the current gov pass a law that to join or run for actual gov positions someone must not have been convicted of a serious crime within the last 7 years? (Maybe more??).

This would bring back some morality and ethics to the government personnel as well as cut out many of those scum bags trying to take advantage of our society.