Hiding Behind Ammunition in Gaza

"The IDF reported that it had attacked a group of gunmen spotted near forces operating in Beit Hanoun. Soldier belonging to the Givati patrol brigade exchanged fire with Palestinian gunmen in the area. During the military activity, an IDF soldier was lightly injured in the leg and rushed to hospital." (YNET)

Palestinians claim that 4 children and their mother, were killed Monday morning in an IDF strike in the northern Gaza Strip -- a shell hit a house in the town of Beit Hanoun. (JPost)
However, IDF radio reports as follows (something not yet appearing in any English language report).

"Unofficial IDF sources report that Palestinian woman and children were not killed by an IDF tank shell.

For the first time in recent months, the IDF is not apologizing in knee-jerk reaction fashion for the deaths of civilian casualties in a war zone, making the IDF radio report even more believable.

As a result, even more Qassam rockets have been raining down on Sederot and Ashkelon. The following news story was from Friday, but I didn't get a chance to post the pics till now)

Four Palestinian Qassam rockets were fired at Ashkelon on Friday morning, one of then landing in the city's southern cemetery.

The al-Quds Brigades, the Islamic Jihad's military wing, claimed responsibility for the rocket fire, as well as for a shooting attack which left two Israeli guards dead in an industrial zone in the Sharon region.

Eli Yifrach, the cemetery's manager, told Ynet that "luckily the rocket landed before the employees arrived for work. It fell inside the cemetery and many graves were damaged.

"One of the graves was completely destroyed, and we are now working cautiously with the police so as not to desecrate the dead. This is a very sad sight." YNET Pics Link 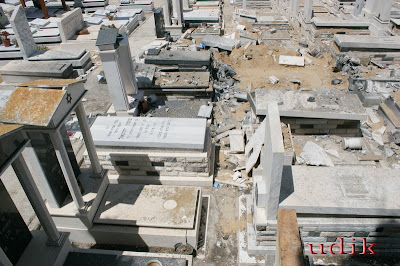 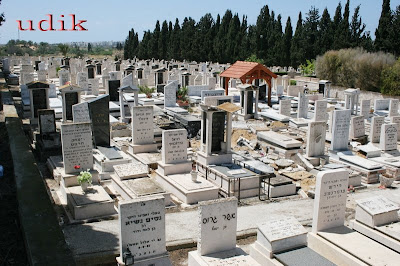 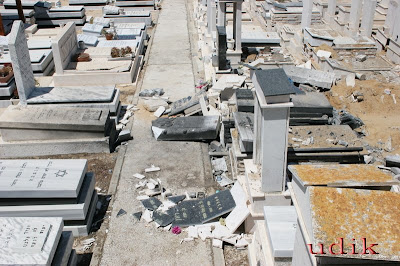 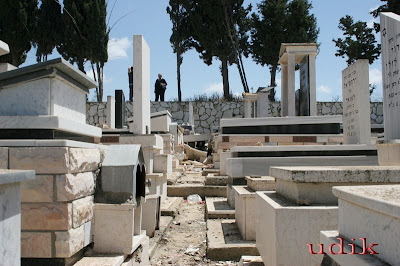 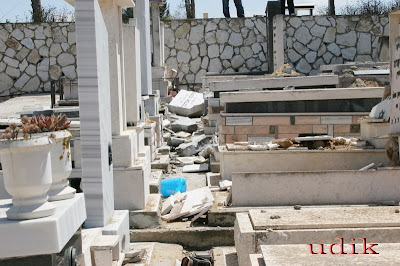 "Without being arrogant, God forbid, I think that today we can say that the Israeli people have a government that can defend it; that it has leadership that knows how to care for its people's security and future." (JPost)
Olmert? Arrogant? G-d forbid.

In Kol Ha'ir this shabbos (Makor Rishon wasn't around), it said that because of the storms we had and general neglect, graves in Har Hazeitim shifted and some bones cames out of the ground.

I'm sure there's a prophecy around there somewhere.

Good move about who really was responsible for the deaths of the family but I don't think ammunition explodes like that. Maybe grenades or RPG shells but not bullets.