So last night I got a last minute invitation to scoot on over to the Peace House in Hebron and permission from the wife to do so (sorry Elchonon, I didn’t see you there).

Everybody who is anybody in the settler world was there, and what super-nice people they all are.

There were speakers (such as Rav Dov Lior and Aryeh Eldad), a movie, tours of the Peace House, and impromptu meetings with the families living there. Rav Levinger was driven by for a few minutes and he greeted people. 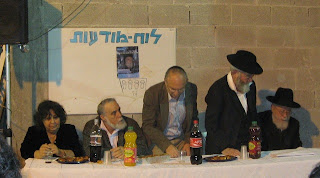 Itzkik Halamish was also there, and I spent some time speaking with him. 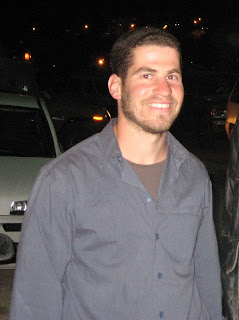 If you’re not familiar with his story, you should be. It’s about a (becoming more and more common) miscarriage of justice and the lack of proper police procedures that we are seeing more and more of against Jews in Judea and Samaria.

I bumped into Baruch Marzel, and told him I was going to vote for him again, but this time he had better win.

Most interesting was the non-publicized background behind the 100% legal purchase of the Peace House, perhaps one day I will be able to discuss it.

But ultimately, the lesson here is once again, the Arabs are more than happy to sell their property to Jews (as long as they won’t get killed for it).

The government has another problem. They wanted certain influential Arab neighbors to complain and say they don’t want the Jews living there (in an attempt to invalidate the sale).

But the local Muchtar (who I discussed in a previous post about his meeting with the Hebron leaders) openly told the IDF and government representatives that he is quite happy to have the Jews owning and living there. (He is apparently fed up with the Leftists who keep visiting and causing problems).

Anyway, that was my unexpected Saturday night in Hebron.

"(He is apparently fed up with the Leftists who keep visiting and causing problems)."

Hey, I live in the Bay Area. The muchtar should count his blessings. He aint' seen nothin' yet.

Hey,
I am stuck at home with a stomach virus :(

"I bumped into Baruch Marzel, and told him I was going to vote for him again, but this time he had better win."

you mean you are going to waste your vote again

Actually, I see it as a Protest Vote against the right-wing party members who are both ineffectual and unable to work together. It is just as effective as voting for the another party that won't get things done for me, or voting for nobody at all.