Out of the Depths, out of the Ashes, Rebuilding Jerusalem

I'll never forget the first time I saw this arch in the Old City of Jerusalem; walking through the Old City on our way to the Kotel, the stark appearance of a single arch reaching towards the sky in the middle of ruins in captivating.
The arch was rebuilt as a tribute to the Churva Shul when Israel liberated the Old City of Jerusalem in 1967. The shul had been destroyed by the Jordanians, as had much of the Jewish Quarter, as had been the ancient Jewish cemetery on the Mount of Olives -- the tombstones from Jewish graves were used to pave roads and build latrines. 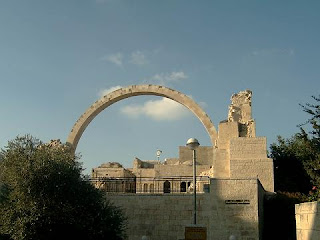 The Churva was the most impressive building in the Jewish Quarter once completed and served the Jewish community not only as a shul, but as a communal meeting place as well.

Ze'ev Jabotinsky organized a rally at the Hurva in order to enlist volunteers in the Jewish Brigade. It is also the place where the ceremony to hand over the flag of the Jewish Brigade was held on the day Jerusalem was conquered in 1917. Herzl visited there in 1898. The installation of the Ashkenazi rabbis of Jerusalem and of the Land of Israel took place at the Hurva and from there the call to save European Jewry was sent out during a public fast and day of prayer organized by hundreds of rabbis.

In 1925, when Herbert Samuel ended his term as the British high commissioner in Palestine, he came to the Hurva, was called up to read from the Torah and was honored with the last reading of Parshat Nahamu (the Sabbath immediately after the fast of Tisha B'Av, when the haftorah, the additional reading from Scriptures, begins with the words "Nahamu, nahamu ami" which means "Comfort My people, comfort them"). When Samuel reached the words "and on his throne a foreigner shall not sit" (in the blessing that is recited after the reading of the haftorah), Rabbi Avraham Yitzhak Hacohen Kook stood up and repeated those words aloud. Haaretz

The Churva was a majestic building with a large dome and large arches on each side of the building. It was impossible to miss among the skyline of the Old City. 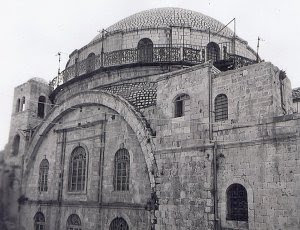 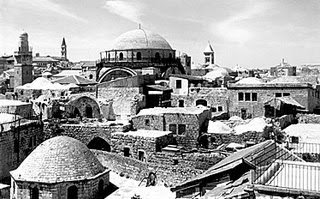 And then the war came. Jews were evicted from the Old City...and the Jordanians demolished and desecrated everything Jewish. (To date, almost every Jewish site under Palestinian control has suffered the same fate; from the gravesite of Yosef to that of Yehoshua)

The ElderofZion has a whole description of the history and destruction of the Churva. 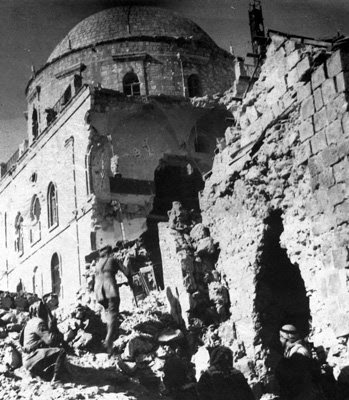 However, not to be deterred, we are rebuilding the Churva shul -- and its in the final stages of construction. The familiar lone standing arch is gone; and the shul's rebuilt exterior is almost complete.

Having neighborhood hitchhikers who work in the Old City -- I sent one the other week on a mission to take some pictures for my blog of it's current status. If you want an amazing English speaking tour guide for the Kotel Tunnels, let me know and I'll put you in touch with her...she took the pictures. 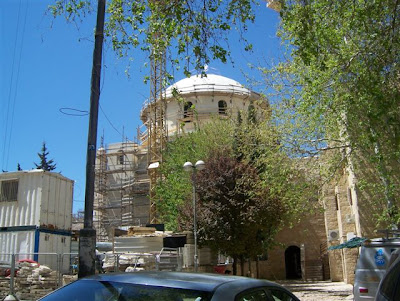 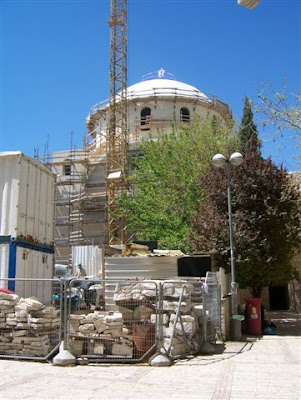 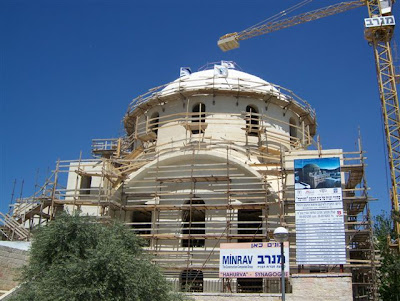 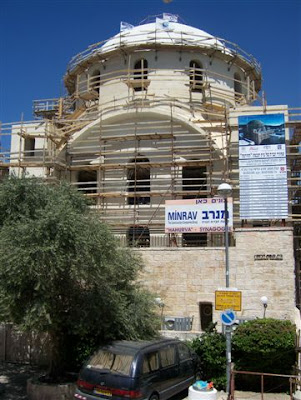 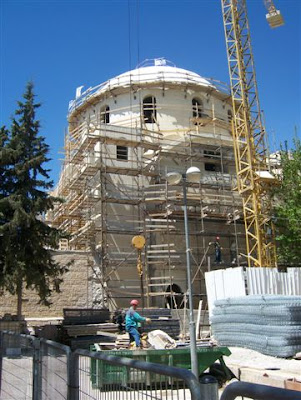 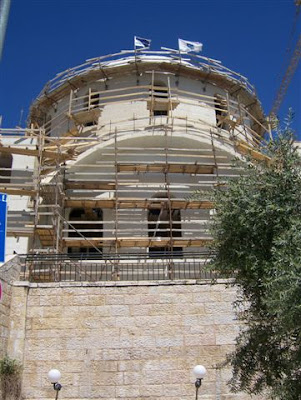 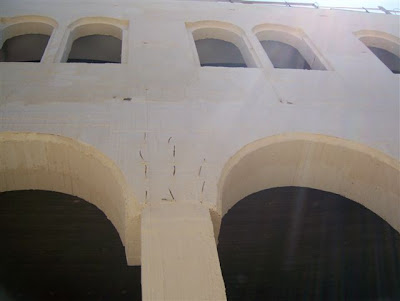 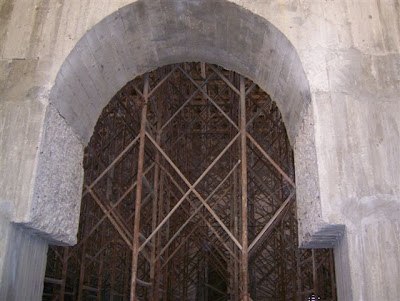 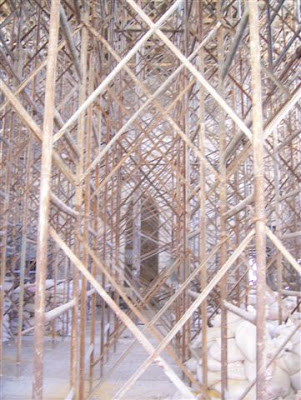 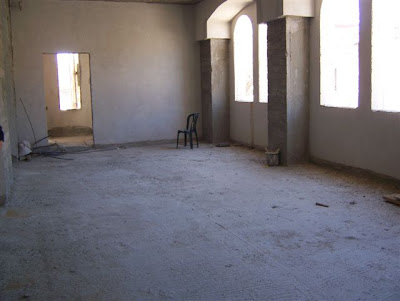 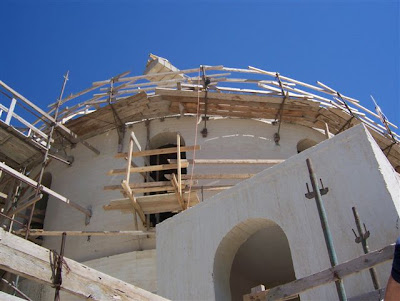 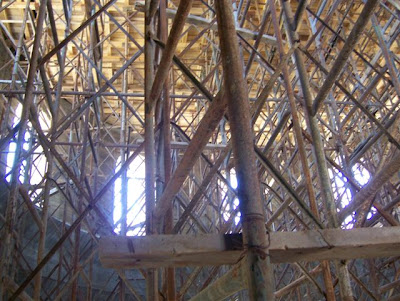 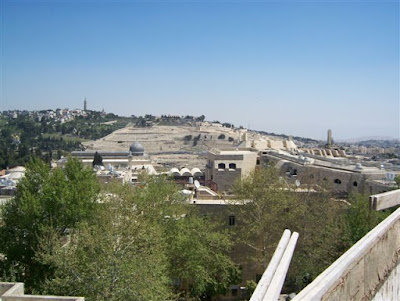 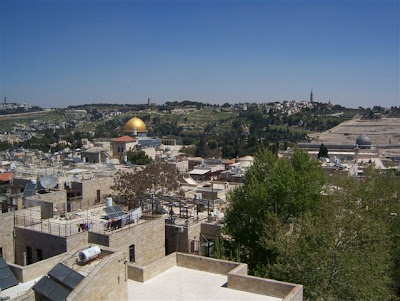 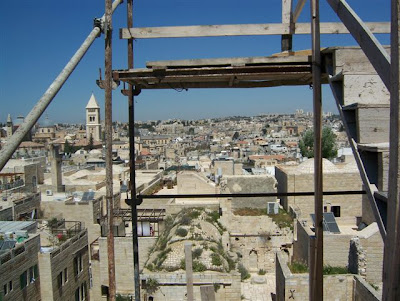 This picture is a few weeks older... 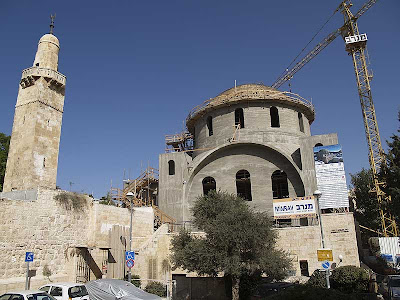 May this be the final time this shul will need to be rebuilt -- and may we see more building cranes in the Old City soon. 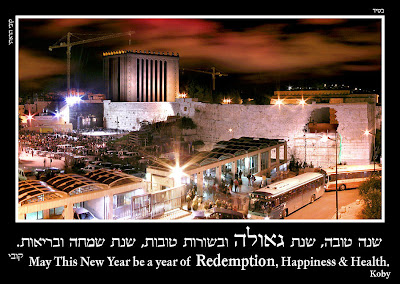 hat-tip for this pic; YMedad.

wow... can't wait to see it. from what i've been told the old city has undergone some changes/renovations since i was there last. will be nice to wander the streets there and see what's different and what's the same!

and yes, would be great to have an english speaking tour guide for the kotel tunnels... can you please email me the details? thanks jameel.

You can see more pictures here on the Streets of Jerusalem

Wow. It was always one of those landmarks I never forgot.

There are a lot of people who don't think it's such a good idea: Mostly because the Jewish Quarter of the Old City is already full of shuls... this was a meaningful historical landmark to many people.

how does one get that postcard at the end of the article, the BHM under (re-)construction?