Who Is Stalking Jameel?

The inherent dangers of the internet and blogosphere are known to all. While I tip my hat towards those bloggers who have stripped away their own anonymity and blog out in the open like Treppenwitz, Hirhurim, and Serandez; I still try keep my identity to myself (for the most part).

However, the 2 scariest issues for bloggers are as follows:

1. Someone revealing their anonymity
2. Stalkers

I carry a semi-automatic hand-gun with me at all times, and have my automatic M16 assault rifle (complete with close range, urban-warfare, rapid target acquisition sight) at my disposal, so I'm not overly worried about stalkers. However, this past Friday afternoon, a stalker got the better of me.

Driving around on Friday afternoon I noticed a note tucked into a bag in my car. "That's odd," I thought to myself, "what's the blue piece of paper doing here?"

Looking at it, my heart sank... 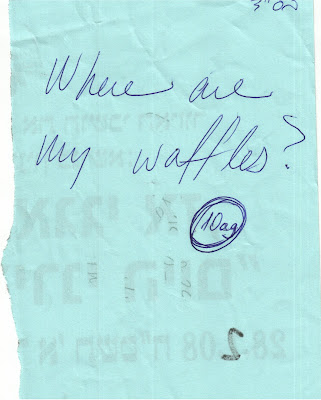 It was mysteriously signed in a circle, "loag." For those of you who aren't familiar with the "Loag", Wookipedia has the scoop:

The Loag, a group of assassins, oppressed the planet Merisee during the Old Republic. They were apparently wiped out by six Jedi after an effort of a full year. Three of the Jedi were killed in the violent denouncement of the cult. At the end of the campaign, the Jedi took the Loag dagger, which the assassins had sworn their blood oaths on, and it was placed in the care of the Galactic Museum on Coruscant.

So not only do I have a waffle stalker after me, but it's an entire group of waffle-starved assassins!

Fine. If that's the price to pay for having a blog, I can deal with it.

My kids are on the lookout for cloaked figures who may snoop around the neighborhood, my wife is well-trained with her own firearm, our home has security cameras outside, and our community security operations center (as well as the IDF) is in 24x7 contact with me.

The "Loag" think they may be tough, but they've come after the wrong blogger.

I think I recognize the signature... if you need me to identify him, let me know

you must drive your wife batty. :D

Rafi; Our "CSI: Muqata" lab is investigating. You can send them your tips via email.

Jameel- it says "10ag." You should be more offended that that's all s/he thinks your cuisine is worth, than worried about potential assasination from a Galaxy Far Far Away!

you need to figure out who you offered/promised waffles to in the last year or so and/or find out where jack was around the time before you found the note cos we know he likes waffles...

while if i got a weird note like that, i'd be a little freaked out, but since i am able to be a bit more objective, i'd say it's someone playing with you.

I was 'comforted' by the 'bsyita dishmaya' on the top of the page.
He should just come out and ask for his waffle outright..
...and not 'waffle' about so much!
:-s (cooornny! but hey, I haven't commented in a while! lol)

The net is closing in on the suspect.

I have the suspect in my basement under a bright light bulb. he has not yet cracked, but he will. For now all he keeps screaming is 10ag! 10ag!

Give me some more time and I will get him to confess.

Yeah, uhm, it's not me, even though I'm STILL owed those waffles. I have no idea who you are, but one of these days, I will: !

1. Shevet Amiad, NY--I was a madricha for that Shevet. (You're lucky BANY was never very organized with archives).

2. I know someone who knows who you are. To her credit, she wouldn't tell me, but I have ways of making her talk (mostly having to do with food).

Better watch your back. There are lots of us disgruntled non-waffle eaters "gunnin'" for you.

Baila: Waffles come to all deserving people that have patience.

2. Someone who knows me?! INCONCEIVABLE!

3. There are SWAT teams now looking everywhere for Loag.

I carry a semi-automatic hand-gun with me at all times, and have my automatic M16 assault rifle (complete with close range, urban-warfare, rapid target acquisition sight) at my disposal, so I'm not overly worried about stalkers.

I wouldn't be quite so complacent, Jameel. The Loag carry Merr-Sonn IR-5 "Intimidator" blaster pistols with them at all times, and have BlasTech DLT-19 heavy blaster rifles at their disposal, as well as Sienar prototype cloaking field generators, not to mention the dreaded Loag dagger.

Also, here's another hint about the particular Loag assassin who's stalking you: He's a professional hacker, as evidenced by the fact that he spelled "Loag" in Leetspeak (i.e., as "10ag"). This means that you are now especially vulnerable to Loag attacks in cyberspace.

Jameel, I've got bad news for you. I've just been informed that every Loag assassin is now equipped with a Waffle Sensor®. There's no way you can hide from them now.

All your waffle are belong to us.

I do not think that word means what you think it means.

(just a guess jack, but I think it's a reference to The Princess Bride)

I could not break him and he escaped. watch out - there is a 10ag on the loose!

Clearly this machloikes exites the best minds of the bloggosphere.

Well at least they were kind enough to put the בס'ד

Hey, I'll gladly pay you 10 agorot on Sunday, for some Vafflim [aka Waffles] today!

Hard to believe that waffles generate so much debate!

And I thought the people who read your blog are serious....

Well, the cat's outa the bag.

Now you all know the secret behind the name of my blog.

I'll get you, Jameel!