9:04 PM During Bagrut test (matriculation exams: Regents, AP, A Levels/GCSE matriculation exams) earlier today, students in Shaar HaNegev (Western Negev) were forced to flee in the middle of the test due to imminent rocket strike. Test booklets were left open on the desk. Rocket hit in an open area near the school. Students and proctor went back and continued taking the test. Ministry of Education gave the students an additional 10 minutes. Unilateral cease fire holding strong.

8:23 PM Jameel reports, via JoeSettler, live from Israel's south. Jameel heard a mortar land in the Western Negev region about 1 hour ago. IDF confirms that is landed right near the border fence (around 3 Km from Jameel's position). What is Jameel doing in the South?

4:53 PM Miss Popularity -- In a Walla poll, the following statement was posed:

Whatever happened to because she makes decisions and not coffee? 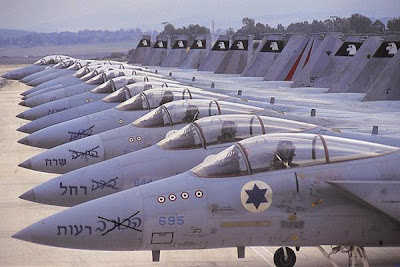 NRG reports that a record number of 30 women cadets are starting the exclusive IAF pilots training program, up from 15 last year.

To date, 19 woman have successfully finished the course, as fighter pilots and navigators.

The new MIO GPS units being sold in Israel for the religious sector have GPS listings in Israel for 2000 kosher and "mehadrin" kosher restaurants, 3360 Synagogues, 280 mikvaot, 460 cemeteries, 280 Holy Sites, and lots more.

I wonder if you can use the GPS to mark shuls as those you don't want to daven in? 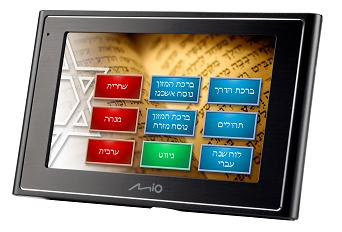 12:46 PM Reports from rotter that the Qassam-1 rocket was aimed at the Emmanuel community. (source)

12:40 PM Qassam rocket found by IDF...in the Shechem, (Nablus) Shomron (West Bank region). The rocket was connected to a timer, but was not set up to properly launch. Reports that this was the old type "Qassam 1" rocket with a range of 3-5 kilometers. IDF sappers diffused the rocket (source)

12:37 PM IDF reports that attack on car in Rafiah was a result of the mortar fired earlier today, and the "mortar team" was in the car. ynet

You can see that there is an archway of some sort down below at the edge of the photo. 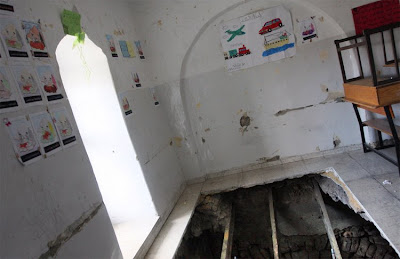 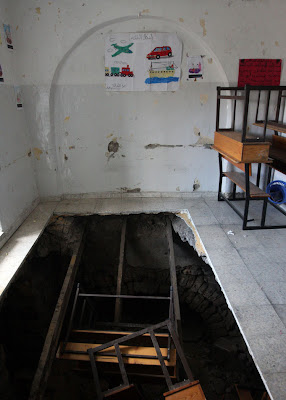 (source)
11:52 AM Minutes ago, a Gazan mortar was fired at the Eshkol region of the Negev. It landed in an open area...no injuries reported.

The ceasefire must continue! As per Defense Minister Barak's instructions, do not expect the IDF to do anything serious.

To explain Israel's current situation, Ehud Barak announced that the Gaza rockets will continue to land in Israel till the "official" ceasefire. Despite Livni and Olmert wanting a more severe response against Hamas, Barak is not allowing IDF reprisals above tepid. His policy directed the IAF last night to bomb empty targets in Gaza (after the official phone calls warning everyone to evacuate the building prior to the bombing run).

Barak is also insistent, "We have no intention of embarking on Operation Cast Lead number two. We said there would be a response (to the rocket fire) and we responded." (source)

If it is an UNRWRA school and the floor collapsed due to tunnelling - (as can be seen by the archway) - perhaps someone was trying to smuggle in Arms to the school ?

Those new GPS units better not fall into the wrong hands!!! They could be used to aim a mortar/Aassam at the shul/holy site of your choice.

haha sure, sure, Livni and Olmert want a more severe response... it's just Barak who refuse it... playing the good cop/bad cop? and it seems israelis love the play.
if they vote for livni a 72% they will get what they deserver, a lot of stinking shit

Jameel in the south - probably trying to make sure this time Israel actually admits to the incoming mortars and rockets.

Livni's popularity - I love how honest Israelis are about questions like that - yup, they wouldn't vote for her even if she was a man!...and neither would I!

Hey it's Comrade Tovya from over at "The Zion Report" blog. Just wanted to drop you a quick line to let you know that I am in the process of recovering my old blog and starting to post again... it's just been to long. Glad to see you are still around.

One of these days I'll shoot you over an email and explain why I disappeared (there is a good reaso for it believe it or not) :-)

Every time the pilot of these airplanes is a woman and it drops a bomb on a terrorist, it should be publicized that it's a woman to embarrass the enemy.

Jameel- can I request no more regurgitating of the mainstream media's obsession with Livni's gender, which a) borders on the sexist and b) I am surprised to see on your blog?

It shouldn't be an issue: She's not even a feminist, her voting record speaks volumes to that effect and in all her years she's never aligned herself with public women's issues or struggles. She's just another useless candidate for PM, much like the other 2.

Livni also makes bad coffee, so everyone has asked her to stop making it. Hopefully they'll stop asking her to continue making bad decisions too.

Its obvious she's not a feminist, since she voted against all bills that would help women (especially, the vote against the law which would have allowed working mothers to claim child care as a valid expense)

She's much more useless than the other 2...I just want to remind my readership how useless she is (and her party for that matter...)