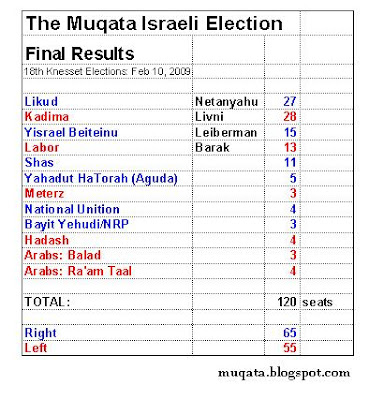 8:34 PM On Channel 2 TV tonight, we were shown different ballots that were cast by soldiers and the others. Many soldiers wrote "Gilad Shalit" on their ballots.

The ballot I found chilling was cast from a prison -- hand-written on the ballot in Arabic was the word: حماس (HAMAS)

7:12 PM Final Election Outcome: No change at all in any of the seat allocations after counting all the votes from soldiers, diplomats, hospitalized, maritime people, and criminals.

Same as what I reported a few hours ago, but now it's official.

5:22 PM Update; Reshet Bet/Channel B radio reports that the official results will be announced at 6:00 PM -- only 38 minutes from now.

5:19 PM The Israel Knesset Elections Committee will hold a press conference at 7 PM Israel time, to announce to final results of the election.

All media sources are reporting there are no changes, so a big "press conference" just seems like a waste of everyone's time... Will keep you all posted in case anything interesting develops. 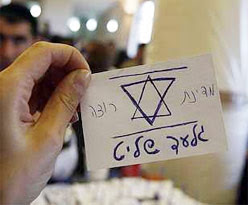 4:49 PM Haaretz reports that according to sources inside the election committee, after the final counting of the absentee/IDF soldier ballots, there is no change in the seat allocations per party.

These are unofficial statements...unsure when final announcement will be made. Pictured at right is a Reuters photo of a ballot cast for captured IDF soldier, Gilad Shalit.

4:44 PM Jameel: I have a feeling there's not going to be any chance in the number of seats...

4:34 PM Reshet Bet -- Israel Channel B announces that its only a matter of minutes before the official announcement of the final election results...

3:11 PM Rumors flying everywhere of what the final results are.

It's all conjecture! Waiting for official results...

2:56 PM The votes have been counted...the final analysis is being done now to determine any changes in the political spectrum...stay tuned.

1:51 PM Could politics get any weirder? Yisrael Beiteinu chief negotiator tells IDF Army radio (Galei Tzahal); Its possible that Yisrael Beiteinu's leader, Avigdor Leiberman, will reccommend to Israel's president, that Leiberman himself should be the next Prime Minister of Israel, instead of reccomending Netanyahu or Livni. (source: glz)

Meretz Chairman Chaim Oron said to Ynet that his party will not recommend the president to place the responsibility of putting together the cabinet neither to Livni nor Netanyahu. "We said even before the elections that if Livni goes into negotiations with Lieberman, we will not recommend her.

Oron responded to his party's performance in the elections, saying, "We will hold a long series of talks, and will try to analyze. It is clear that there is a partial answer – what happened in the last days of the elections with Kadima's very successful false campaign."

11:57 AM More from Kadima MK Shitrit on Channel B (Reshet Bet) Radio:

Kadima will suggest to President Peres that Tzippi Livni should govern a leftwing government comprised of Kadima, Labor, Mertez, Shas, and UTJ -- a total of 60 seats, with support from the 11 Arab seats outside the government.

When asked if this was "going against the will of the voters, who voted for a rightwing majority", Shitrit replied, "with all due respect, the voters are stupid."

11:46 AM The 150,000 outstanding votes from the 18th Knesset election are being tallied now, and should be completed by the afternoon. The Israeli election board will release the results this evening.

Prior to these outstanding votes, Kadima is leading the Likud by 36,231 votes

11:43 AM National Union representative, MK-elect Yaakov Katz said he was very pleased after meeting with Likud leader Netanyahu. "Netanyahu repeated what he said before the elections, that he wants a rightwing, pro-Eretz Yisrael government" (A7 via rotter) 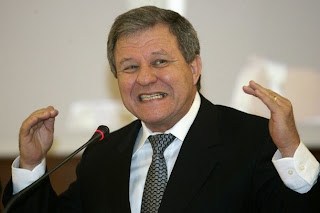 10:50 AM Kadima MK Meir Shitrit on Channel B Radio this morning: "With all due respect, the voters are idiots."

"The leftwing lost the election by THIS much"

"I want to squash stupid Israeli voters like this"

"But we were this close to signing an agreement with Hamas..." 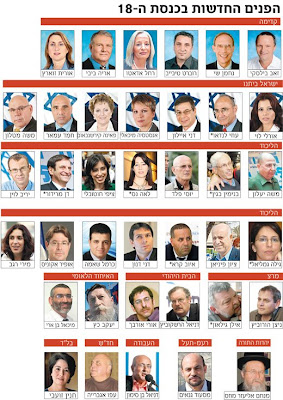 9:11 AM IDF Galei Zahal Radio reports: The additional 150,000 votes should be tallied by this evening.

9:06 AM Walla reports that Livni is finding it too difficult to put together a coalition, and is going to ask current wheeler-dealer PM Ehud Olmert for "help."

Shows really excellent leadership qualities...she can't even form a coalition without the help from Olmert.

9:06 AM: Walla reports that Livni is finding it too difficult to put together a coalition, and is going to ask President Shimon Peres for "help."
Shows really excellent leadership qualities...she can't even form a coalition without the help from Peres.

At least she's knows enough to go to Olmert, the wheeler-dealer who's expert at dirty backroom politics, not Peres, the scatterbrained loser...

I really hope Lieberman cannot be bought that cheaply. And if so, does Livni still believe she can form a coalition? She wasn't able to do so when give the chance a few months ago under much more auspicious circumstances. And now...?

Eh. Though not quite as optimistic as טובה הארץ (which is true), but עברנו את פרעה...

Lurker: He's not a loser any more -- he won the Presidency.

LB: עברנו את פרעה
(we need to keep repeating that :)

Jameel - we do, all the time. I say this in a positive sense - in the grand scheme of things, we're just a blip on the face of time.

oh yeah, that'll help. Livni asking Olmert for help? I am now much calmer about Bibi's next government position. I was worried when she was talking to Lieberman...her talking to Olmert gives me great hope that she will have a lovely seat on the sidelines for years to come.

the sad thing i have this bad feeling that Bibi will be a snake and form coalition with kadima and not call in to the picture the far rights...Yisrael Beitenu told me that they would not sit with Livni, i bet they change their mind. Please Bibi make me proud and form what your people, your country, your region and your world needs, a very strong FAR right gov.

weetonyharris, good idea, the only thing a very strong FAR right government will get us is years of isolation, civil unrest and in the end a destruction of the state of Israel from within. The best thing for Israel is a joint coalition with Likud, Kadima, Labour and a bit of Meretz to keep the others honest.

What was Shit-rit talking about?

I bet he was referring to all the people who voted Kadima...

Gary, u did not have to right down where you are from, it was obvious by your post you are from the left hand side of Israel - Tel Aviv. Trust me, the best thing for Israel is a strong right coalition, why, because we in israel have 2 main problems, our neghbours and ourselves. On both cases i totaly believe only a strong right can fix these two problems...one teach the arabs that both them and us are here for ever and teach ourselves the importance of being in unity. you some how think the far right wants it only one way, no arabs and only a religous country, you are wrong.

Gary: If the majority of the country wants a right wing government, then why should the country get a government made up of "Likud, Kadima, Labour and a bit of Meretz?"

Meretz? The majority of the country votes right, and you want to impose the views of a tiny party on everyone?

Nu... where are those results? My L-rd! I am NOT patient. Can you just Fedex the Mashiach already?

weetonyharris, how do u plan to teach the arabs that both them and us are here for ever - the far right believe in transfer - what will this teach them besides to hate us even more ?

"When asked if this was "going against the will of the voters, who voted for a rightwing majority", Shitrit replied, "with all due respect, the voters are stupid."

This is how deep democracy runs in this country, especially on the Left.

Of course there is something to Shitreet's statement "the voters are stupid".

Look how many voted for Kadima.

i heard through a friend that is "in the loop" that Lieberman has thrown his support behind Livni. Has anyone heard the same ?

Eli; That's just to pressure Netanyahu -- its a negotiating tactic.

I can't see Leiberman's #2, Uzi Landau going with Kadima...and if they do, they're electorate will never forgive them.

So what is the final, official count? The following numbers were just presented in the Jerusalem Post:

"Following the count, Kadima remained with 28 mandates, Likud was close behind with 27 seats, Israel Beiteinu was the third biggest party with 15 mandates, Labor received only 13 mandates, Shas 11, and United Torah Judaism 5. The National Union and Hadash parties received 4 mandates each, while Habayit Hayehudi, Meretz, the United Arab List and Balad got 3 seats each."

Unless my arithmetic is wrong, these add up to 119, so one is missing!

And now Haaretz just posted their own count (differences from Jpost highlighted), which adds up to 121!

No wonder everyone says the Israeli system is confusing...

Elie: During the official press conference, the numbers of votes per Knesset seat didn't add up either.

(And you wonder why both Livni and Netanyahu declared themselves victors ;-)

The numbers on the official Israeli Government page (http://www.mfa.gov.il/MFA) unfortunately show the extra seat going to UAL. So the Arab parties are at 11 seats.

Jameel, I wouldn't be so quick in lumping Shas and Agudah in the right-wing camp.

Their core ideology is money.

They're always available to be bought by the highest bidder, from either camp.

The (in)action of the 'religious' MKs during the hitnatkut has yet to be judged.

Why do you allow prisoners to vote?

That is quite stupid indeed.