Many IDF soldiers these days will tell you about all the "tension" up North...on Israel's Northern border. Was it the underground tunnel discovered 2 weeks ago, meant to be used for a Hizbollah attack on Israel or kidnapping of IDF soldiers? Tonight on Channel 2 TV, Defense Minister Ehud Barak alluded to weapons on their way to South Lebanon which would affect the security of the "skies over Lebanon" for IAF warplanes.

Obviously, Israel cannot allow for cutting edge anti-aircraft batteries to be imported to South Lebanon...so it's only a matter of time for Israel to ensure these weapons systems do not arrive. 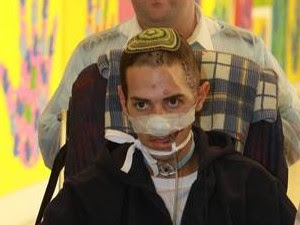 Karov did not cease to amaze the medical staff at Beilinson hospital's emergency room, as he walked into their morning staff meeting today, to personally thank them for helping with his recovery.

Professor Pierre Zinger, head of the ICU discussed their initial pessimism when Karov arrived at the ICU. "He arrived in critical condition, suffering from shrapnel in his head, brain, face and chest"..."we were pessimistic and thought he had mere hours to live."

Through intensive treatment, the doctors managed to stabilize Aharon, and after a few days, he woke up. "When he first saw me, he did know who I was, or where he was," recalled Professor Pierre who is positive that Aharon's quick recovery is not exclusively thanks to the medical efforts of his staff, but also due to Aharon's family which supported and helped him. "There is no doubt in my mind, that played a large part in his recovery," the professor said.

Minutes before leaving the Beilinson hospital on their way to the Tel Hashomer Sheba hospital rehabilitation unit, Ze'ev Karov described his son's reaction upon hearing that he was moving to rehabilitation; "He closed his fingers together, brought them to his face, kissed them, and then held his arm outstretched towards the sky" [in thanksgiving].

Zee'v Karov also said that the doctors told him again and again that they had seen very few cases of such quick recoveries from serious injuries like that of his son Aharon, but they still have a long way to go...he needs to relearn simple things like writing and using his hands.

The IDF Paratrooper officer was critically wounded from an explosion in a booby-trapped house during the Cast-Lead IDF operating in Gaza. While doctors fought to save his life in the ICU, his family waited in the adjoining room, including his newlywed wife, Zviya, who he married only a day before being called back to active service in Gaza.

Translated by the Muqata from NRG, photo from Na'or Rahav. 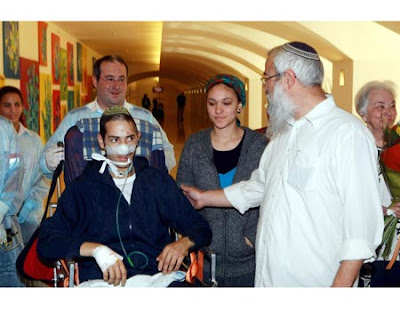 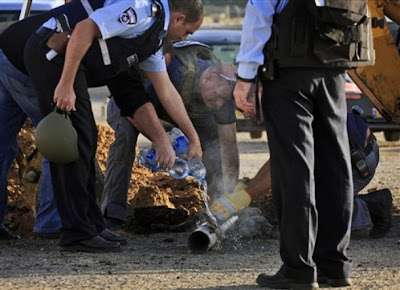 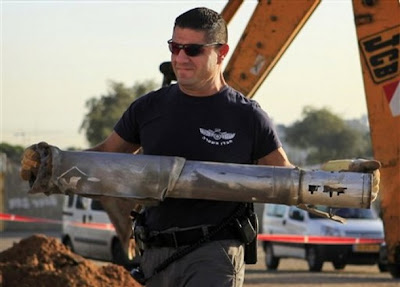 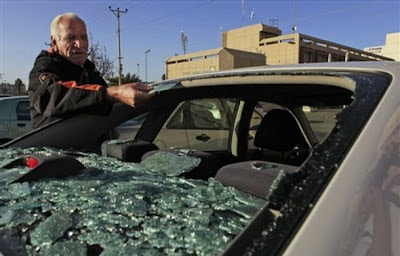 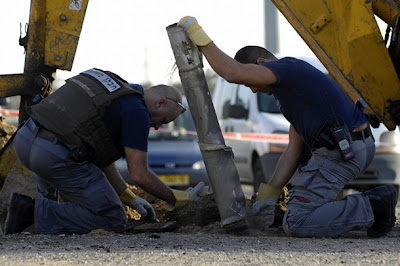 1:08 PM Despite ongoing Hamas mortar and rocket strikes on Israel, International Humanitarian Aid will continue to enter Gaza today via Israel's border crossings to the tune of 200 trucks. (source)

12:27 PM Reports that IAF jets hitting Hamas targets in Gaza, and smuggling tunnels in the Philidephi corridor between Gaza and Egypt. No reports of injuries or wounded.

10:43 AM Ehud Barak trying hard not to hit back at Hamas.

"According to intelligence reports, which said previous rocket attacks that followed the ceasefire were carried out by small Palestinian organizations, Tuesday's Grad rocket on Ashkelon was apparently fired by Hamas. The narrow forum comprised of the prime minister, defense minister and foreign minister also convened Tuesday after the attack." (ynet)

10:40 AM Israel Election Committee rejects ad of R' Ovadya Yosef blessing people.
I saw this ad on a bus this morning on my way to work....it had a picture of R' Ovadaya with the Biblical priestly blessing, "May G-d bless you, and keep you"

The ad was disqualified in accordance with the Election Law, which states that a promised for a blessing must not be made in return for a vote. (ynet/Aviad Glickman)

10:21 AM Good Morning Ashkelon - you're the lucky first city to get hit by a Grad rocket today during the ceasefire.

Why do you keep calling it a ceasefire?

Instead, call it a -Strike-Cease-/Strike-fire

B"H for the Medical Miracle
Thank you for posting this; my heart went out to him and his Kalah. I hope they won't let Hassanim go to battle before they spend a whole month celebrating.

Don't know if you saw my last message, but I'm back... and I'm blogging again. How have you been brother?

i have been trying to find a source for the south lebanon air defense system. can you please tell me what the system is and the web site you found it on?

Comrade Tovya: Its been like, 2-3 years? Where did you disappear to?!

lemzia: The report was on Channel 2, Israel TV last night during the 8 PM news broadcast. I'll see if I can find an additional link for you.

I got married, had 3 kids, started a corporation and started traveling all over the world just about everyday, deaths in the family, my grandfather got dementia, and those are just a few. My life really got crazy back then within a very short amount of time. And then of course Yahoo! lost my blog and the whole thing got deleted, and that didn't help either.

Oh well, either way, I'm back for good this time.