Political officials in Jerusalem said in response to reports that Hamas agreed to a ceasefire agreement to be put into effect on Thursday, "Israel is not negotiating with Hamas. Israel demands that two conditions be met – halting the rocket firings and terrorist attacks, and halting the smuggling." (source)

Note: Someone should mentioned to the Foreign Ministry that kidnapped IDF soldier Gilat Shalit was left out of the equation.

2:13 PM Update on school collapse from earlier today. An UNRWA (aren't they in the news alot these days?) school's classroom collapsed, resulting in minor injuries. Nir Barkat, mayor of Jerusalem quickly arrived on the scene and blamed the collapse on the poorly engineered and contructed school. A city resident who gave his name only as "Alla" accused "settlers" for the responsibility for the school's collapse, saying that "it's all because of settlers excavating next to the Kotel [Western Wall]" (source, in Hebrew)

2:09 PM Northwestern Negev targeted by Hamas mortar shell about 30 minutes ago. No injuries reported. IDF's deterrence diminishing by the hour, as Israeli government refuses to allow IDF to retaliate.

1:04 PM Reports that a ceasefire (a new, improved on?) will start between Hamas and Israel on February 5th, for the period of a year. It's unclear what the rules of engagement of the new ceasefire are, considering we're in the middle of a ceasefire now and 8 rockets have been launched at Israel today alone, and shots fired at IDF soldiers near Kissufim. And is Gilad Shalit included in the ceasefire?

1:04 PM Confirmed: School was outside the walls of the Old City...next to the Givati parking lot.

12:51 PM 3 girls were lightly wounded in the collapse of a ceiling in a school near (or in) the Old City of Jerusalem. (Still waiting for an update on exact school)

12:45 PM Kashrut Update: Osem is advising consumers that trace amounts of powdered milk were found in a Cream of Chicken soup, Maneh Chama -- instant cup of soup" which is labaled a "Pareve". Packages can be returned any supermarket or grocery store that sells Osem products. (source)

12:39 PM MDA cancels Mass Casualty Event -- hardly any wounded (if any). Updates as they become available 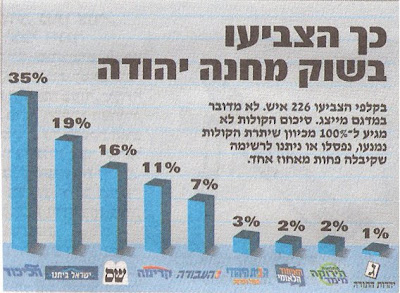 11:57 AM Ehud Olmert announces, the IDF's retaliation for Rocket strikes against Israel will be disproportional. (I guess "zero" response to 8 Qassam rockets is disproportionate)

11:54 AM Walla reports that as of now, 8 ceasefire rockets have been shot at Israel from Gaza, and the IDF has not responded at all.

10:07 AM Shooting at IDF soldiers at Kissufim junction (Gaza border).

9:29 AM (Galei Tzahal) US stopped Israel from boarding the Iranian weapons smuggling ship. (Other sources) Part of the arms were to go to Syria, the other part to Hamas.

9:23 AM Correction: 4 Kassams landed in Israel.

8:30 AM For some reason Hamas announced over the weekend, they will be implementing a cease fire (lull was the Arabic word they used). They announced that it would last for between 6 months to 18 months. It would go into effect Sunday Morning at 6:00 AM.

One rocket hit between 2 nursery schools/kindergartens in Sderot.

No reports of injuries.

What happened to recognition of Israel's right to exist as a fundamental requirement of any negotiation? Has there been some change in the Hamas position that I've missed, or is the Israeli government now so tightly under wraps by the international community that they are being forced to sit idle?