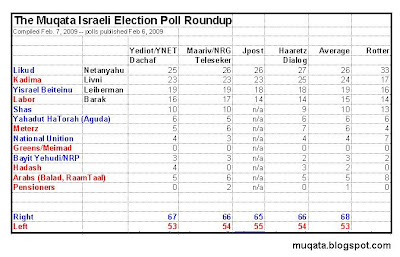 By Israeli law, polls cannot be conducted or taken any more till Israel's election. The above table represents the latest (and last) polls from Israel, all published on Friday, Feb 7th, 2009.

One of the commenters on Friday's post said he was voting for Kadima. I'd like to understand why anyone would vote for the most corrupt party in Israel's history? The current Kadima Prime Minister, Ehud Olmet attended his 13th police investigation this past Friday for corruption in the past 2 year period. 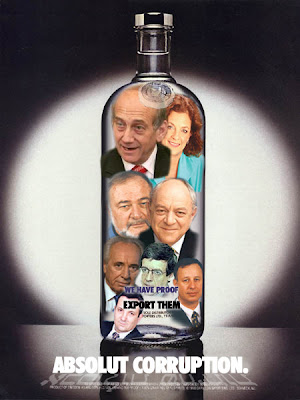 Additional winners from the upcoming elections, Kadima party list include:

Kadima #4: MK Tzachi HaNegbi: Indicted, awaiting trial for fraud and breach of trust for allegedly making 69 inappropriate political appointments while serving as environment minister between 2001 and 2003)

Down but not out: in addition to Ehud Olmert, don't forget former Finance Minister and MK Avraham Hirschson (indicted for breach of trust, aggravated fraud, theft and money laundering) and past MK Omri Sharon, convicted criminal of fraud and breech of public trust.

I could go on and on about Kadima, but I honestly don't understand why anyone would vote for them. I could even think of more reasons to vote for the Labor party, than for Kadima. This is the party that founded itself on the coat-tails of the Disengagement, the party that then continues to turn its back on the refugees of Gush Katif -- after forcibly removing them from their homes, denying them permanent housing, causing severe unemployment (over 60%), and a myriad of social and educational issues.

Livni has voted in the Knesset against every single law that would advance women's rights in Israel.

I could go on and on, but would rather talk about possibilities that might further Israel's goals as a Jewish, Zionist and democratic state.

And I'll be posting that tomorrow.

PS: During Operation Cast-Lead, when Defense Minister Ehud Barak was running the war and Opposition Leader Benjamin Netanyahu put aside all partisan politics and gave marathon video news interviews...Tzippi Livni decided to campaign instead (note, Labor and Likud had zero meetings like this). See the video for yourself...Channel 10 (Hebrew only)

I'm not voting Kadima anyway, but was particularly interested in this comment: "Livni has voted in the Knesset against every single law that would advance women's rights in Israel."

Is there any specific information you could direct me to in this regard? If it's accurate, it would change quite a few folks' minds that I know personally. Which I'd be happy to finally be able to do ...

Amy - I'll be more than happy to post the information for you. Should have a link within the hour (a bit busy today)

I also heard a radio interview with MK Shelli Yechimovitch (Labor) on Galei Tzahal with Razi Barkai last week that stated the exact same point -- I heard it first from her.