Thank you to the dozens and dozens of readers who emailed the Muqata, notifying us that blogger was broken and that the Muqata Blog was offline for 12 hours.

For the future, if blogger is offline/the blog appears offline, try going to www.muqata.com which will redirect you to our backup, emergency site.

As you know, Israel is currently in the midst of a diplomatic flurry to try and stop the Palestinians from a unilateral declaration of a State. The problem is that there will never be a peaceful resolution to the Palestinian issue. There is no way that Arab refugees who fled Israel in 1948 and are currently living in "Refugee camps" in Lebanon, Jordan, Syria and other places will ever abandon their hopes and dreams of returning to Yaffo (Jaffa), Tel-Aviv) Haifa, Tzfat (Safed), Lod, or to the locations they used to live before running away in 1948. No Palestinian leader will ever abandon the "Right of Return," and no leader will ever abandon their dreams of ruling the Old City of Jerusalem and the Temple Mount.

While all this has been going on, there are some personal stories I wanted to share from the past few days:

1. Motzei Shabbat (Saturday Night) I drove my son to his pre-IDF yeshiva (Mechina Kdam Tzvait) which used to be located in Atzmona, in Gush Katif before its forced evacuation in the "Disengagement". The yeshiva's name was shortened to "Otzem" (strength) after the forced relocation...and the yeshiva has been rebuilt in the community of Naveh.

Naveh is located a few kilometers south of Gaza, and a few kilometers east of Egypt -- its not in the friendliest of places. Naveh is under construction -- as homes are being built for the refugees of Gush Katif (6 years later). Sand is everywhere, and my son says its at the end of the universe. At night, there were no nearby lights of neighboring cities....everything was dark, the sky over-head was brilliantly lit by stars and the moon. The yeshiva is mostly temporary buildings while the permanent ones are still under construction. From the parking lot, we trekked through lots of sand as I accompanied my son to his dorm room. Large signs from elite IDF units were hung over different dorm buildings...either as motivation or as appreciation from the yeshiva's graduates who have gone to become Israel's best soldiers and officers.

I couldn't help but think of Gush Katif...the same sand was everywhere, the same atmosphere, the same pioneering spirit. Despite having relocated to the sand covered town of "Naveh" in "Israel's pre-67 borders" which are considered holy by the Zionist left, I felt on edge that G-d forbid this community would be forced to move yet again.

2. Yesterday morning as the Palestinians made their preparations to request statehood from the UN, I was called as an MDA-medic first responder to a traffic accident. A Palestinian car had flipped over, and we took care of the wounded till a Palestinian Red Crescent ambulance came to take them away. Meanwhile the local Palestinian fire truck arrived, to see if there was anyone to extricate from the upside-down car (there wasn't). The Palestinian firemen, all wearing their standard grey camouflage "firemen's" uniforms peaked through the windows of the car. The fire-chief sauntered over to the car, holding a cigarette in his hand, as he examined the underside of the car...and the gas tank. It was at that moment, I grabbed a fellow volunteer medic, and quickly left.

Why firemen need grey camouflage uniforms is a challenging question -- who are they hiding from? Why do they need to be camouflaged? Is the fire fighter crew simply missing automatic weapons?

3. Rules of Engagement has been handed out to all IDF First Response Units in the Jewish communities of Judea/Samaria, for how to deal with potential Palestinian riots, infiltrations and unrest. I think we need a lawyer for each unit, since the blame for any response to a complex situation will automatically bring the IDF, Police and world media clamoring for the arrest of any settler defending himself or his community.

4. Palestinian flags try to compete with Israeli ones throughout the West Bank...with the Palestinians losing. My car has Israeli flag mirror covers on it...much to the annoyance of the Palestinians...and there were many reported cases of Arab rock and molotov firebombs thrown last night at Israeli civilian vehicles. The mosques of the Arab villages are all decked out in flags with extra green lighting, giving a very eerie glow to them.

5. The religion of peace has teamed up with a radio station in Somalia, and Somali kids can win exciting prizes such as weapons, rifles, bombs and religious books...in a Koran contest. The Andulus radio station is run by the al-Qaeda-linked al-Shabab militia.

Al-Shabab is battling Somalia's weak, UN-backed government. The militants have recently been weakened by famine in territory they control. (YNET)

6. Last but not least, the Muqata hereby offers its recombination in the Israeli Labor party primaries today: Vote for Shelly Yechimotich. The alternative, Amir Peretz is a party hack, who was the arrogant defense minister of Israel during the Second Lebanon War, which Israel didn't win. Shelly is a left-wing socialist, but has an ideological backbone not based on hatred. Many Labor voters were incensed when she announced 2 weeks ago that the settlements weren't evil and were in fact, started by Israel's Labor party. If you are a member of the Labor party, vote for Shelly! 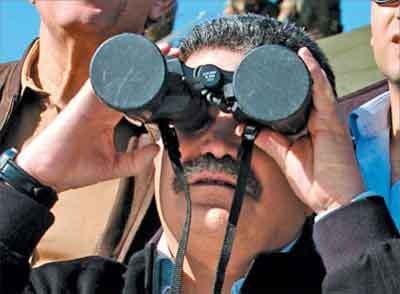 That's all for now folks!