Hamas Founder's Son: "A Palestinian state will bring war to the region" 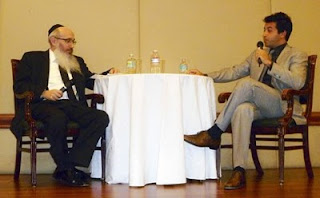 The "Green Prince" known by his real name as Mosab Hassan Yousef, the oldest son of Sheikh Hassan Yousef, a founder and leader of the terrorist organization Hamas -- addressed Chabad in South Florida last week:

During his visit to South Florida, the 33-year-old Yousef spoke last Wednesday to more than 500 people during an appearance in Weston sponsored by the Chabad of Weston and the Daniel Cantor Wultz Foundation. On Thursday, he addressed two Chabad of Downtown audiences in Miami.

Yousef, who was born in Ramallah in the West Bank, said Israeli soldiers severely beat him when he was 17-years-old. Soon afterward he was contacted by the Shin Bet to spy for Israel and imprisoned for 16 months to "not arouse suspicion."

He said during his time in prison he saw Palestinians torturing other Palestinians. Hamas wanted to know who gave information to the Israelis, Yousef said. Hundreds were tortured and 16 were killed. Not one had a relationship with Israel, he said.

Yousef said he asked himself, "What is the difference between Israeli soldiers and the Hamas military wing?" He said, "For the first time I started to question the reality of the movement my father established."

Yousef said he eventually came to see that Israel was not the enemy. "We are the enemies of ourselves," he said. "Our leaders sent us to death for their own reasons and they still do. They care about their bank accounts and their positions. They lie to you on a daily basis for their selfish gain."

During a question and answer session following his talk in Weston, Yousef said, "There should have been a Palestinian state 50 years ago if the Palestinians wanted a state." Instead, he said, "they wanted to destroy Israel."

Bottom Line Up Front
Russia, China, Nigeria, Lebanon are sure votes of Yes, while Bosnia, Gabon are likely a yes.

US, UK, France, Germany, India and Brazil are likely to vote No. India will also vote No.

Colombia sees more benefit in voting with the US, so they are a No. Portugal may say No, also.

I do not see the 9 vote majority for a state of Palestine; however, my experience in the Middle East and West Africa tells me that the vote, either way, is not going to pass without violence.