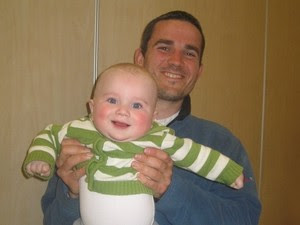 After 48 hours of foot dragging, the Israeli Police have admitted that despite their initial insistence, and the insistence of the IDF spokesman, Asher and Yonatan were murdered in a Palestinian terror attack this past Friday, when Palestinians threw rocks at the Palmer's car as it traveled on Highway 60.

The police have determined via a CT scan of Asher's skull, that cracks were seen in his facial bones, caused by the rock which was found in his car (and was hurled through the windshield of his car).

Pictured at right, Asher and Yontan Palmer, murdered by Palestinian Terrorists who hurled rocks at the Palmer's car while driving on highway 60, this past Friday afternoon.

This past Friday afternoon, the Muqata reported the terror attack on a father and infant near Kiryat Arba, in which Palestinian Arabs threw rocks at a car, causing it to overturn, killing the car's occupants.

None of Israel's primary news sources mentioned the attack, rather amorphously stated that a Jewish car overturned near Halhoul on highway 60 near Hevron and the events leading to the "car accident" were still underway.

Just hours after the murderous attack, in which Asher Palmer (25) and his infant son Yonatan (age 8 months) were murdered by Palestinians, PA President Mahmoud Abbas gave his speech to the United Nations why the Palestinians deserve a state of their own.

Israel's courts have already documented the facts: The car being driven on highway 60 from Northbound, suddently swerved, overturned, leading to the death of Asher Palmer (25) and his infant son Yonatan (age 8 months). The windshield had a large hole in it, and inside the car was a large rock, covered with blood.

However, the police want to also an additional autopsy and blood tests to rule out alcohol in the blood or a heart attack as the reason for car swerving off the road and over-turning. The judge denied the police's request saying that the evidence is adequate that a rock hit the windshield, and the family should be able to bury their loves ones as quickly as possible, in accordance with Jewish law. 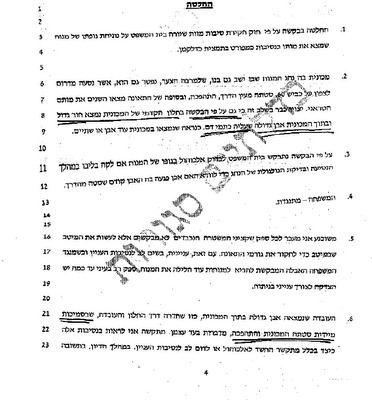 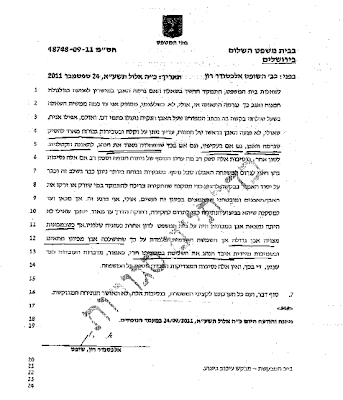 Israel's prosecution is now trying to force the issue with Israel's Supreme Court.

This entire story is currently under a court imposed "media blackout" -- which serves no one.

Its a sad commentary on the Jewish contempt for fellow Jewish brethren.

The government cares more about being sensitive to the image of Jew-hating Arabs than it does about justice for slain Jews.

And people wonder why the country neither knows rest nor justice!

Is there any wonder why trust and faith in the Israeli police continues to remain at an all time low.
This is not the first time the police have been caught lying about a Jew murdered by Palestinians on the road. Last time they called it a suicide, but once the details of the scene were publicized against the wishes of the police, we learned that the murdered man must have been quite accomplished to have murdered himself in such an impossible fashion.

Had 9/11 happened in Israel, the Police would have claimed for days it was an air-traffic accident.

Only if it happened in the Judea or Samaria.

I think it is a disgrace that this happened like this. Had it been reported correctly in real time (and not 48 hrs later) - Netanyahu could have incorporated the incident in his speech, and show the world (again) what the Pals are really about. Heads need to role in the Israeli police ...

Baruch Dayan Haemett. hashem yokom damam. Hashem please, I beg of you, bring Moshiach. A wife and a mother cry for her husband and son. A grandmother and grandfather, an aunt and an uncle cry, too. The siblins and children shed tears. Please have rachamnis on this situation.

They kept it under wraps because some of the nutcases in Hebron would jump on this tragedy to wreak havoc among Palestinians who wouldn't even be connected to this disgusting murder.

As Jews we ask for HASHEM to avenge their precious blood. We do not take the matters into our own hands.

Another baby ... :((
This one reminds me of the other adorable baby from Hebron, shot in her mothers arms.
Another little piece of me splintered and buried deep.

Peace is impossible without justice in one's own house. Israel's Jews should reflect on the fact that if they don't treat themselves with dignity and respect, they have no right to demand the Arabs treat them better. In a word, Tikkun Olam begins within one's own gates.

Its a good resolution to keep in mind for Rosh Hashana.

Right, Jameel- what you wrote wasn't slandering any Jews on any level.

Or do the IDF, Police, NIF, Leftists etc only get to be considered "Jews" if their views are in line with that of the Muqata?

Shana Tova to you too.

What slander? What wasn't true about the above article? Where did Jameel call the police, IDF, NIF, or Leftists nonJews?

I see here a factual reporting of events.