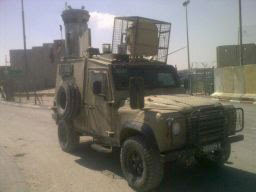 Heard about "The Scream"?

Its the IDF's new, non-lethal, crowd dispersal device...and it was used today to disperse a Palestinian Independence Riot in Kalandia, Jerusalem. The device projects non-lethal sound waves -- resulting in a deafening sound people cannot stand. "The Scream" is so effective that not even earplugs are effective as a deterrent.

The Scream has been used before, yet today marked its first appearance in Jerusalem, when the IDF used it to stop dozens of rioting Palestinians who were throwing rocks and molotov cocktails at the IDF checkpoint in Kalandia. (JPost) 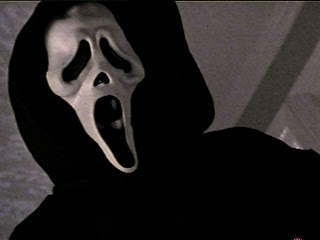 More about the scream from a posting a few years ago: (from Wakeupfromyourslumber)

JERUSALEM—The knees buckle, the brain aches, the stomach turns. And suddenly, nobody feels like protesting anymore.

Such is the impact of the Scream, the latest weapon in the Israeli army's high-technology toolkit.

Launched Friday afternoon near the West Bank village of Bil'in, after another in the almost daily demonstrations against Israel's controversial security barrier turned violent, Israel's secret weapon lived up to its billing, by most accounts.

Witnesses describe a minute-long blast of sound emanating from a white Israeli military vehicle. Within seconds, protestors began falling to their knees, unable to maintain their balance.

An Israeli military source, speaking on the customary condition of anonymity, confirmed the existence of the Scream, or Tze'aka in Hebrew, in an interview yesterday.

"The intention is to disperse crowds with sound pulses that create nausea and dizziness," the Israel Defence Force spokesperson told the Toronto Star.

"It is probably the cleanest device we have ever had, when you compare it to rubber bullets or tear gas. It is completely non-lethal. It has no adverse effects, unless someone is exposed to the sound for hours and hours."

IDF officials said the technology was researched and developed over a span of five years as a result of "lessons learned" during the Israeli army's withdrawal from Lebanon.

"We had a situation during the Lebanon withdrawal where we had hundreds of people storming IDF positions," a military source said. "As a direct result, it was decided we needed the means for a more benign way to control crowds."

Army officials said the Scream might become an element in its strategy against Jewish settlers and their supporters in August, when the Israeli government begins uprooting 25 settlements in the Gaza Strip and northern West Bank.

"We will use what we need to use during the disengagement, depending on the circumstances on the ground," the official said. "Nobody can foretell the future."

The IDF is saying little about the science behind the Scream, citing classified information. But the technology is believed to be similar to the LRAD — Long-Range Acoustic Device — used by U.S. forces in Iraq as a means of crowd control.

Hillel Pratt, a professor of neurobiology specializing in human auditory response at Israel's Technion Institute, likens the effect of such technologies to "simulated seasickness."

"It doesn't necessarily have to be a loud sound. The combination of low frequencies at high intensities, for example, can create discrepancies in the inputs to the brain," said Pratt.
"Basically, the brain receives a signal that your body has lost balance. You feel like you are tilting even when you are not. The discrepancies can cause headaches and nausea."

Pratt said such phenomena sometimes occur by accident. He remembers one instance in which office staff at an Israeli bank building fell ill after the installation of an industrial air conditioning unit.

"When everyone became nauseous, tests were conducted to find a contaminant. But nothing was found. Finally, acoustic tests were conducted, and a certain low-frequency sound was discovered," said Pratt. "It made people sick, all because of the way the noise of the new air conditioner resonated in that particular space."

Israeli and Palestinian activists are unsure what to make of the IDF's new machine. Some who were witness to the deployment on Friday said Palestinians have already learned to neutralize the Scream by stuffing cotton in their ears.

"Just before the sounds began, a Palestinian man I know from Bil'in gave me cotton for my ears. He said, `The Israelis are going to make a noise. This will help,'" said Lisa Nessan, an International Solidarity Movement activist from Ramallah.

"How did he know to do that? Obviously it must have been used at a previous demonstration. Or the Palestinians wouldn't have been prepared for it this time.

"I was lucky because the cotton seemed to filter out the problem. But I saw other people around me sit down because they couldn't keep their balance. I really don't know what to make of it. I've never seen anything like it before."

Arik Asherman, a leader of Rabbis For Human Rights, was cautiously optimistic the Scream could make a positive difference.

"We've been arguing for years that Israel should engage non-lethal approaches to crowd control. If this thing actually works without doing any permanent damage, that's a step forward."

But Asherman said Israeli officials would be wise to use the Scream sparingly, lest it become a tool to "sanitize dissent."

"If this makes it any more difficult for Palestinians to express themselves in a non-violent way, that is problematic. The best way to disperse demonstrations is to deal with the actual issues.

Reminds of of my post from a few years ago...10 Muqata Bonus points to the first person who connects this post to the Hebrew phrase, "פעם שלישי, גלידה"

In a previous post, the expression was gramatically more correct. http://muqata.blogspot.com/2010/02/on-third-time-i-scream.html
פעם שלישית, גלידה
As far as what you meant to say, is it that the third time Israelis use the device, the Palestinians will complain and scream about it? Or that the Israelis first uded different crowd dispersal methods and the third time they are using the "Scream method?"

Whatever, just keep it up!

Devorah: You WIN! Please contact us by email to claim your prize :-)

Can this device be used at the UN?

heck. I want to see it used at the DNC.

They're testing it out on Arabs to use it on ''settlers'' later???

That site you linked to appears to be an anti-Israel, Jew-hating site.

anon: Could be...but he had the most interesting data on the scream.

i would use this even if there weren't any crowds. i'd drive around in it among the palestinians just for fun.