Who would burn down an Israeli hospital? One guess...

Hadassah Hospital on Mount Scopus recently purchased and are installing 4 high-powered water cannons at the cost of hundred of thousands of shekels to deal with the ongoing arson threat by their Arab neighbors in the Jerusalem neighborhood of Issawiya.

The hospital, which treats any sick or wounded person, regardless of race, religion or nationality has been repeatedly attacked.

Arabs, from the nearby Jerusalem neighborhood of Issawiya have repeatedly tried to burn down the hospital buildings over the past few years, they've even injured staff members with tear gas they threw into the hospital compound. Furthermore, the hospital is afraid that the Arabs, once they declare a State, will riot and try even harder to reach and destroy the hospital. 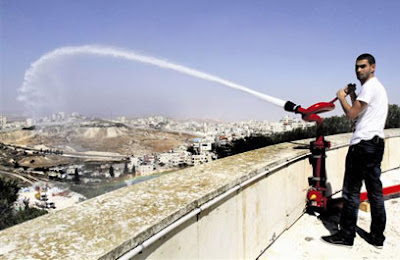 Hadassah's concern is not unfounded. There is a long history of Arab terrorism against Hadassah hospital and it's staff.

This past week, the hospital conducted a drill where the hospital gates were closed and protected against an Arab mob attack.

These 4 water cannons are installed in locations that will maximize their ability to extinguish any hospital buildings the Arabs set on fire.

Golda Meir once said, "There will only be peace when the Arabs love their children more than they hate us."

Unfortunately, the Arabs would apparently prefer that their children be unable to receive world class medical care, so as not to see the evil flag of the Jewish state waving nearby.

Those who hate the Jewish people reap what they sow.

I can't feel too sorry for them.