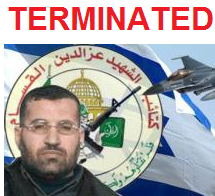 Minutes after my request from you to deal with the terror from Gaza,  Israel's Shin Bet announced that Hamas military general has been killed by an IDF surgical strike, and his first lieutenant has been critically wounded.


From Wikipedia: Ahmed al-Jabari (Arabic: أحمد الجعبري‎, born 1960) is the second-in-command of the military wing of Hamas in Gaza Strip. He has been credited as the leader in the takeover of the territory by Hamas and the firing of Qassam rockets into Israel. Jabari is also a high-ranking official within Hamas' political leadership and is the founder of the Nur Association which aims to help Palestinian prisoners and the families of slain Palestinian militants.[1]

Israel's residents within a 40 kilometer range of Gaza are now being requested to be near bomb shelters, as the Hamas prepares to retaliate...

Hamas now says that this is a declaration of war.  Maybe they should have thought about that before they attacked us...

muqata we need you back with up todate reports, no one is better than you