Refresh your browser often to see latest updates from the IDF "Pillar of Defense" operation against Gaza's Palestinian terror.Now you can receive all the updates and more by giving a LIKE to the Muqata and subscribing on Facebook www.facebook.com/Muqata

Hear every single air raid during the war -- at IDF Public Radio, Gal-Galatz 91.8 FM in Israel or here on the web:  http://rr-d.nsacdn.com/radio/glz/glglzradio/300/200

See the top of the blog -- www.muqata.com for Thursday's Open thread updates.

12:12 AM (Thursday) As rockets continue to fall on Israel, the official IDF blog announces the end of Operation Pillars of Defense. 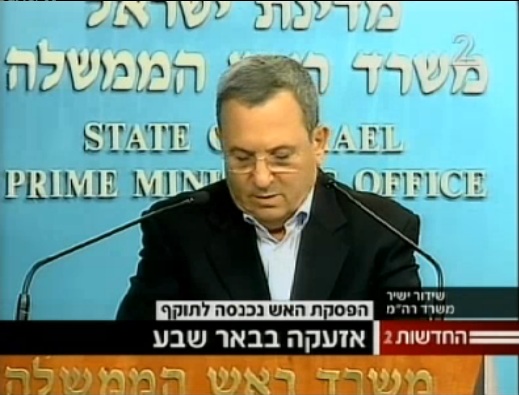 8:59 PM With one minute to go till the ceasefire...see on facebook in Hebrew: Only in Israel will you find a Prime Minister that Talks like Churchill but acts like Chamberlain.

8:33 PM Ynet reports that a rocket was shot at Israel from Sinai and landed near a community near the border of Israel/Sinai.


8:08 PM No injuries in mortar attack on Metullah.

8:03 PM In the previous rocket attack on Beer Sheva minutes ago, a rocket scored a direct hit on a house in Beer Sheva. No Injuries.


7:43 PM There will be a joint press conference at 8:30 PM by PM Netanyahu, DM Barak and FM Leiberman.

7:00 PM I'm going grocery shopping people...and will not be updating the blog for at least 2.5 hours.  Should resume by 10 PM at the latest...unless something big happens.  Remember -- if there IS going to be a cease fire, the coming hour is the most dangerous.

6:12 PM Reports from moments ago that a terrorist was captured in the Modiin area.

6:09 PM Ongoing hunt for terrorists in the Modiin area. Traffic jams throughout Central Israel as police roadblocks are set up everywhere.

5:44 PM From the Elder of Ziyon Blog - How did baby Omar Mishrawi die?

5:27 PM Roni Daniel - Channel 1 TV Military Correspondent: The Hamas is desperate for a cease fire. Now is the time to hit them harder!

5:08 PM US Embassy to personnel: STAY AT HOME!  I think they have gone a bit overboard.

Due to the ongoing police hunt for a suspect in the bombing of a Tel Aviv bus, the Embassy has advised its personnel to remain at home until the INP (Israeli National Police) gives an all clear.  American citizens should monitor local news reports for the latest information. (US Embassy Website)

5:05 PM Reports of 3 wounded in rocket attack in the community area near Gaza...no air raid siren sounded prior to the rocket strike.

4:51 PM 5 Minutes ago a rocket landed in the Eshkol region. No damage or injuries reported.

4:08 PM Israel says to the world: The attack in Tel Aviv this morning will complicate a cease fire.

4:04 PM IDF continues artillery shelling of Gaza according to Palestinian reports.  Israelis in areas adjacent to the Gaza strip are also hearing the explosions coming from Gaza....

2:55 PM Jubilation in Gaza over the attack in Tel-Aviv today. Music and Koran blaring from mosques and residents are firing in the air in joy.

2:12 PM IDF: Our forces just attacked 3 Hamas terrorists as they tried to launch rockets towards the State of Israel.  This attack is part of the over 100 targeted attacks by the IDF since this morning.

1:58 PM Regarding the earlier update about the 9 Cabinet Ministers meeting -- the meeting will be at 2;30 PM at the Kiriya in Tel Aviv, and was planned before the attack today in Tel Aviv.  Therefore, the original intention was probably to discuss the cease fire...though now it will center more on the Tel Aviv attack.

1:40 PM Over the past hour, Air Raid sirens continue to be heard in Southern Israel.

1:27 PM The Israel Senior Government Cabinet (9 Ministers) are meeting now.  It is unclear if the purpose of the meeting is to give the green light for a ground incursion, or to accept/negotiate the cease fire.

- In the attack on a bus at 12:02 PM today, 21 people were wounded. 2 are in moderate to serious condition, and the rest are in light condition.

- A suspect was apprehended near the TASE buidling in Ramat Gan. [update: no connection to today's terror attack]

- Police suspect a female terrorist is still at large. [update: 2 suspects are in custody.]

1:06 PM Extremely conflicting reports going on now.  Breaking News: Israeli police are closing the Azrielli Towers.  Reports that a female terrorist has been apprehended.  It will take some time for the picture to become clearer...Reports on Channel Bet Radio of an additional explosion in Tel  Aviv which has not been confirmed.


12:25 PM Initial reports: Terrorist left the bomb on the bus and then left.

12:18 PM Channel 22 reports 10 lightly wounded on the scene. Reports of additional wounded have already made their way to local hospitals.

12:16 PM All forces moving away from the area, putting on bullet proof vests and helmets due to a serious threat of a secondary explosive device on the bus.

12:14 PM Apparently the bus was empty, or had very few passengers on it.  Only a small number of wounded being treated.

12:13 PM ALL FORCES LEAVING THE BUS AREA  - SERIOUS CONCERN OF SECONDARY EXPLOSIVE DEVICE ON THE BUS.


12:32 AM OK people - time for me to go to sleep. Blogging will resume in the morning....see you then.  Wishing a quiet night to Israel, and a prayer for our soldiers.

12:29 AM IDF reports of 25 successful airstrikes on quality targets in the past 30 minutes.

For six days, the IAF pounded Gaza. On the 7th day, the powers at be wanted to rest, but there was no ceasefire for the cowards, the enemy, the PR people, and the weary. And on the eighth day, there was a ground war?

A little over an hour ago there was a rocket barrage fired towards Yavneh and Kiryat Ekron (south of Rechovot).

Sirens in Ashkelon 5 minutes ago (shortly before 7:30 am).

Another barrage of rockets towards Ashkelon just now.

God bless them all..This is so sad, but thanks for the update on what's happening..

Did Hillary say something like now we have "peace in our time"?

It would have been appropriate...
(sarc/off)

Sirens in Ashdod 3 minutes ago; sirens in Netivot 1 minute ago.

THAT SPINELESS GROVELING GROUP OF GHETTO JEWS!!! Who else can I vote for besides Likud? I want the bums OUT!

According to Yeshiva World there have been 12 rockets fired into Israel in the past hour since the ceasefire went into effect. I guess it is only a one-sided ceasefire.

According to friends down by Yavne, it's closer to 20 rockets...and Mashaal and the Arabs are gloating, and fireworks are going off in Arab neighborhoods of Jerusalem to "celebrate" the defeat of Israel...unless Obama promised to take out Iran's reactors in exchange for this agreement, then we've been betrayed by Likud.

Who thought this was a good idea?!?

Israel Radio reported in the 11 PM news bulleting that since the start of
the ceasefire at 9 PM the terrorist have launched 20 attacks against Israel.

It should be noted that under the terms of the agreement, the only thing
that Israel can do in response to attacks is to file a complaint with Egypt.

To repeat: if Israel is attacked it would still be a violation of the
agreement for Israel to respond. By the same token, if Israel saw
terrorists in the middle of launching attacks against Israel it would be a
violation for Israel to try to stop the terrorists from attacking.

Here is the relevant passage from the agreement: “c. Each party shall
commit itself not to perform any acts that would breach this understanding.
In case of any observations Egypt as the sponsor of this understanding shall
be informed to follow up. “

Mazal tov to Muqata Correspondant Evan, on the birth of a son!

Jameel,
Any chance of having resuming the pre-primary discussion, now that the war is over?
Yishar koah on the best source for updates all week!