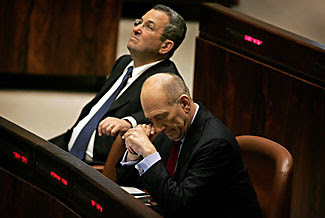 Ehud Barak has got stupendously mind-blowing chutzpa to presume to castigate Ehud Olmert from the moral high ground. Apparently, this entire country has completely forgotten the 2000 State Comptroller's Report, which laid out in excruciating detail the scandal of Barak's network of phony amutot (NPO's) – many of which purported to be charities – through which he illegally funneled millions of dollars into his own election campaigns. Barak did the exact same things that Olmert did. Barak even had his own personal Morris Talansky – an English millionaire by the name of Octav Botner. Barak's strategic advisor at the time – Tal Zilberstein – masterminded and oversaw the entire money laundering scheme, and became one of the prime suspects named in the criminal investigation opened against Barak. Zilberstein is a man who certainly gets around: Today, he is Olmert's strategic advisor.

None of Barak’s sordid history, of course, has deterred him from pontificating against Olmert today, demanding that Olmert resign or suspend himself. Nor do the media seem to have noticed the incredible irony and hypocrisy in Barak assuming the mantle of Mr. Clean with regard to a matter involving illegal cash transfers and money laundering. What a surprise.

For background and details on the Barak money laundering scandal, here are a few articles from the time of the release of the 2000 Comptroller's Report:

On Galatz this morning Tal Zilberstien basically warned Barak to the effect that "he who lived in glasshouses shouldn't throw stones." And what was interesting was that he implied that he was referring to new stuff...

Don't like Barak particularly, but let's see what happens, so far there has been considerably more smoke than fire.

Analysis: Passing the buck(s)
By GIL HOFFMAN
Barak intended to express his disgust with Olmert, but he ended up looking just as bad.

The difference between Barak and Olmert is that Barak has not been caught....yet.