Eli Cohen: Our Hero in Damascus 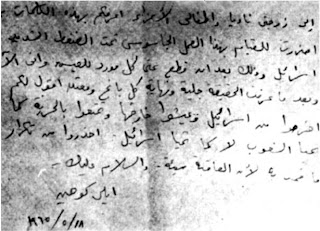 Today's Hebrew Date marks 43 years since the death of Israel's Master Spy, Eli Cohen. In his last letter to his wife (pictured at left) he writes:

I write these last words in the hope that you will always remain together. I request from my wife that you forgive me, take care of yourself, and provide a good education for our children. The day will come when my children will be proud of me, and you dear Nadia, you are permitted to remarry another man to be a good father for our children. In this matter, you are completely free [to marry whoever you wish]. I beg you not to mourn what has happened but to look towards the future. I send you my last kisses. Please pray for my soul.

"One of the most memorable and daring attempts to infiltrate Syria, which at the time controlled the Golan Heights and frequently shelled the Israeli settlers down below is that of Eliahu ben Shaoul Cohen an Egyptian born Jew.

Eliahu ben Shaoul Cohen, worked as a Mossad agent in Damascus, Syria under the alias of Kamal Amin Ta'abet from 1962 until his exposure and execution on May 18, 1965. Cohen was able to supply considerable details on Syrian political and military matters because of his strong interpersonal skills and abilities to build close ties with business, military, and Ba'ath Party leaders, and Syrian President Amin el Hafiz. He was hanged in Martyr's Square with the television cameras rolling for the entire world to see.

Eli was privy to secrets of the Syrian elite including those of national security. Eli was considered to be named the Syrian Deputy Minister of Defense. He was the only civilian to receive private tours of military installations, even being photographed in the then Syrian controlled Golan Heights with high ranking Syrian officials looking over into Israel.

As a result Eli sent highly informative reports back to Israel detailing the Syrian water deviation project and each and every one of the outposts on the Golan, including tank traps designed to impede any Israeli attack.

Eli's influence on Syrian officials helped Israel beyond measure. Eli suggested that the Syrians plant trees on the Golan near each of their fortifications. Based on the eucalyptus trees, Israel knew exactly where the Syrian fortifications were.

Two years after his death, in June 1967, the intelligence Eli Cohen provided enabled Israel to capture the Golan Heights in two days as part of Israel's victory in the Six Days War.

Eli Cohen was the greatest Mossad agent Israel has ever known. He was greatly admired by all, including the Syrians. His deeds fed and are still feeding the imagination and fantasy of many. He is a hero who sacrificed his life for the sake of Israel, his fellow Jews, his children and his family.

This movie trailer is based on Eli Cohen's life and death, "The Impossible Spy"

This has always been one of my favorite stories. I only wish that Eli Cohen was here to tell it.

We own this book at home- I find it moving, fascinating and was thoroughly enthralled by the story.

That note to his wife is so so sad.

The letter in Arabic from him is completely different from the English translation! Are you serious? It says in Arabic: ' To my Wife Nadia and the dear family. I was forced to do this spy work under heavy pressure from Israel after I lost all living sources. And I'm now, and after I knew the clear reality, now know my end as an agressor and a traitor. I say to you: ' leave Israel and live abroad and enjoy the freedom that other people enjoy, not as lived by Israel. Be aware not to repeat what I did as the consequnces are davastating. With my greetings to you.

Mr. Jameel this author of this blog! You want to REALLY write a blog? write about how you've been duped in putting a fake translation to an original message!

To Mr. Jack (first comment): First learn Arabic before you decide to make this your favourite story!

Actually to the rest of you.. seriously.. here's the arabic text and you can translate it yourself

The translation is simply fraud!!!! he does not say kind things about Israel or the life in Israel. It is one thing to tell us that he was under pressure to write this note explaining why he didnt want to do this or why he doesnt like the life in Israel, it is another for you to lie to us about the translation. He actually makes it clear that he wants his family to leave Israel!!!