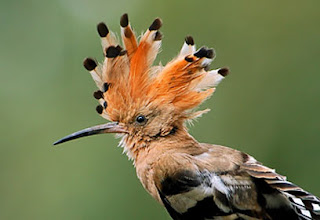 Over 155,000 thousand Israelies voted to chose Israel's national bird, which was announced yesterday.

Only a few votes decided tipped the scales for the winning bird, the Hooppe, as Israel's national bird. (photo credit, Israel Fichman)

Israel's President Shimon Peres, who announced the winning bird said, "today more than ever we need green scenery, fresh air, and the beautiful, multi-colored birds that flock here." He added that "ornithology is one of the main assets of our small country." The president also remarked that 500 million birds pass through Israel's skies annually. "For such a small country, that's a world record," he concluded. (YNET)
The runner-up candiate, the "Ehud Olmert Seagull" seen in this movie, came in second

I hate those damned birds. They eat bees.

One more thing for chareidim to riot about - we can't even pick a kosher bird...

Israel has a lot of resources besides birds. Too bad Shimon Peres is so negative about the country.

Trep: Its all one big conspiracy against you :)

Avraham: He has to be negative in order to boost his award winning Oslo process.

Well, living under my "olah chadasha" rock, I wasn't even aware that there were national elections on this thing; I would've definitely voted for the Hoppe bird, because it is a frequent visitor to our backyard;

I doubt the second bird you show will even be in the running in the next election....and we'd never vote for that one anyway!

I like it. It has a suitably quirky look to represent a Jewish nation. Those headfeathers are adorable.

Of course, Benjamin Franklin wanted the turkey to be the U.S.'s national bird--which I personally think would have been a fine idea, but somehow we got stuck with bald eagles anyway.