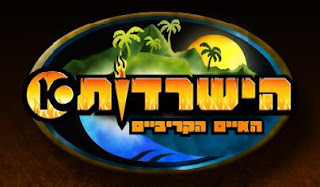 Last night was the final episode of the Israeli "pseudo reality" TV show, "Hisardut" (Survivor -- apparently based on a US show I've never seen), and was the buzz of radio talk shows this morning.

Over 46% of Jewish Israeli households watched the final moments of the show to see who the winner of "Survivor" was last night at 11:30 PM (something like over 1.3 million people)

The show doesn't deserve to be written about, I will just make 2 points.

The winner of the show, "Naama" Kesari left a few month old infant to participate in the show for over 52 days. She also left her dying father...and he in fact died not long after she returned home to Israel from the "Caribbeans Island" where most of the show was filmed. (It was reported through the season by different newspapers that the contestants weren't really "alone" on a deserted island, and in some pictures one could make out homes in the background)

I can understand men or women who have to leave home for business trips, but to participate in a reality TV show leaving a baby at home and a dying father? What sort of woman throws away the last few months of her father's life or the importance of being with her child, to participate on a TV show for a chance to win a jeep and a few thousand dollars?

The judges (the losing contestants) voted her as the best survivor, throwing out a nasty lawyer "Dan" who lied to everyone left and right to get to the end. It's not surprising that he is already talking about going into politics in Israel.

Is this trash TV program a reflection of Israeli society? A group of fellow citizens who had "gone overseas, split into groups, run around in bathing suits, plotted, lied, avoided showers and put snakes and ticks in their hair" -- along with eating snakes and killing chickens for fun? (Haaretz)

Who is in the Knesset today? Liers, theives and political prostitutes, many who abandoned their party platform of the Likud to carry out the Disengagement -- throwing close to ten thousand Jews out of their homes. Their reality continues every day, with unemployment at over 50%, and more than 90% without permanent housing solutions. They were democratically thrown off the island into shark infested waters that continue to harass them daily.

While the finalists of Israeli Survivor many not be Kadima's politicians of tomorrow, Shimon Peres and Ehud Olmert's government need to stop treating the State of Israel as a reality show.
I guess we've survived worse.

How do you know so much about the show?

It's mind-numbing trash, of course. But I thought it was fun, and I liked--well, if you want, you can read what I liked over at my blog.

But please don't take it to seriously.

You are right about Dan, though--he'd fit right in as an Israeli politician.

Baila; One doesn't have to live in a cave to know about the show...it's all over the place.

I dont take anything seriously about the show; except that it IS true that Naama left her baby and dying father to participate. I found that seriously messed up.

And a chicken was killed for entertainment purposes only. Not educational purposes, not for food, just "stam." One doesn't have to be a card carrying member of PETA to find that distasteful...

A much BETTER show was the one produced by "Tzav Piyus" a few years back that didn't make religious people feel uncomfortable about watching it (you could even participate if you were religious, unlike this show, where you had to eat snakes and run around in swimsuits all day).

what's wrong with running around in swimsuits all day? I wish I could! Not that television viewers would want to see what I look like in a swimsuit, but that is another issue altogether...

I tried once to watch a clip on the "hisardut" website to see what all the hype was about. I thought it was totally uninteresting.

I didn't watch it either, though given how incessantly my colleagues discussed it, I almost feel like I did.

I couldn't agree with you more about Naama, and had been wondering the exact same thing. I don't understand at all how she could leave an infant at home for such a long time for something so shallow as this show. Her values are seriously screwed up.

Ditto what Liza said- I too hardly saw it, but got to "enjoy" the series via my obsessional colleagues. And nobody thought that Naama should win.

I did hear that Dan (the nasty, know-it-all lawyer who killed the chicken) is now volunteering with "Let The Animals Live" to make up for his poultricide.

You couldn't make it up.

Liza: Her values are messed up...and perhaps all those voting for her? What does that say about our society?

Oh Jameel... Please don't make me go there! Just thinking about it gives me heartburn.

IIRC, the first winner on the America survivor was a guy who constantly lied to get ahead.

I believe that sometime afterwards he got caught for failing to pay proper taxes on his winnings.