What the heck is going on in Lebanon?! 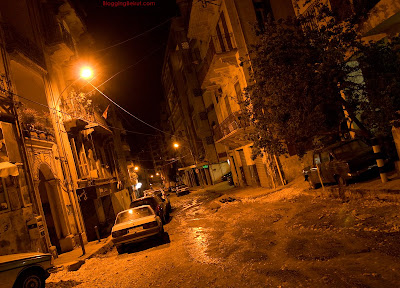 Picture via BloggingBeirut
My good friend "Lurker" and I have each missed major historical events as they took place;
The Beirut Blogger calls Hizbollah, the "opposition" -- yet the combination of Amal and Hizbollah has taken over the Beirut airport, the media, burned down newspaper offices, and Lebanon is now in mayhem, with people fleeing in all directions.

The Lebanon Star reports from Beirut: Lebanon's governing coalition, the March 14 Forces, accused Hizbullah of staging a military coup against the state and said that Hizbullah's arms have become illegitimate after they were used against their fellow Lebanese citizens. "Hizbullah's claim that its arms were only targeted at Israel have proved false and invalid in the past two days, which witnessed the uses of such arms against the Lebanese people," the statement said.
Despite the dire warnings on the United States of America Embassy website in Beirut;

As stated in the current Travel Warning for Lebanon, the Department of State continues to strongly urge that Americans defer travel to Lebanon and that American citizens in Lebanon consider carefully the risks of remaining.

Major roads to Beirut International Airport remain blocked, and there is only limited airline service at present. Violent clashes in several areas in and around Beirut have been reported, and it is still not known when the airport road will re-open and normal air transport services will resume. The main road to Damascus remains blocked.

American citizens wanting to depart may wish to consider chartering private watercraft to Cyprus. Until such time as travel services out of Lebanon become available, the U.S. Embassy urges American citizens to ensure they have an adequate supply of food, water and other essential items and to remain safely inside their homes. Americans are encouraged to review their travel plans following resumption of normal air services.

the embassy website claims that it's still business as usual...sort of.

The U.S. Embassy remains open for business; however, Nonimmigrant Visa processing has been suspended except under special circumstances. American Citizen Services and Immigrant Visa processing are functioning normally. American citizens are urged to avoid the airport road and any other areas where demonstrators are gathered, and to monitor the local media for information regarding the security situation.

However, Israeli websites claim that the US has already started evacuating its personnel from the Beirut embassy.

Of course, nothing could be worse for Israel than the timing of Lebanon's take-over by Hizbollah, than the current (and latest) Olmert scandal -- which is paralyzing Israel from effectively preparing for the new reality. The only message the government could send out was far from reassuring...

The latest upheaval in Lebanon found its way to the government meeting Sunday, as Military Intelligence chief Major-General Amos Yadlin briefed the ministers on the ongoings across the northern border. Israel, said Yadlin, must be prepared for the power shift in Lebanon: "Hizbullah's use of weapons inside Beirut send a very different kind of message… We have to be pragmatic, but there is no need for hysteria."

Vice Premier Haim Ramon added that "we have to realize that Lebanon is a Hizbullah state. Everything happening there is their doing… The country is ruled by the Hizbullah and the reigning government is meaningless, its fiction."

Internal Security Minister Avi Dichter reiterated, "Hizbullah maintains its hold on Lebanon, without the responsibility of running matters of state. This creates a real difficulty for Israel, which can't work against the (emanating) regional terror."

"We are constantly briefed on the situation in Beirut, and since Israel may be affected by what is going on over there, we are somewhat concerned… Israel, however, cannot lead the international response (to the events), which is why we are still refraining from any official move." (YNET)

The bottom line is that Lebanon is now going the same route as Gaza (or vice-versa). Both will be ruled by Islamic fundamentalist groups that are proxies of anti-Israel fundamentalism. Both are dangerous to Israel's security. Both will be active battle fronts against Israel -- and will play off each other; escalation on one front will bring about escalation on the next, making it even more difficult for Israel to respond to the ongoing missile strikes from Gaza (or Katyusha attacks up north)

The Middle East has definitely just taken a new turn for the worse.
Wherever I am, my blog turns towards Eretz Yisrael טובה הארץ מאד מאד
Posted by Jameel @ The Muqata

You'd know about Lebanon earlier if you checked in more often at JoeSettler!

With posts like that I can cancel my subscription to Mad Magazine.


What an apt title for him!

He told me about some big event in Russia back in August, 1991.

For those who don't remember, this was the attempted coup d'état against Mikhail Gorbachev that triggered the final collapse of the USSR.

Actually I've been following and posting on the escalating internal Lebanon situation for a while now. This was just part of the series.

All my regular readers know in advance when an event in Lebanon is actually important enough to pay attention to.

The only thing I missed (because I let myself be bamboozled by the mainstream media), was accepting (even though I knew it was wrong as I wrote it), that Suleiman was a "centrist" figure, when he really has some sort of affinity (connection?) for Hezbollah/Syria (which is also why they openly support him in return).