Once upon a time, the Arabs of Eretz Yisrael annually commemorated the "Naqba" ("day of the catastrophe" / annual day of defeat) on May 15th, the day after the English date of Israel's declared independence in 1948. These days, it seems that the Naqba celebrations have been changed to directly clash with Israel's Yom Ha'Atzmaut (Independence Day) which is commemorated based on the Hebrew day (5th of Iyar).

Yesterday [Sunday], two hundred left-wing activists and Israeli Arabs marched on Sunday from the Jerusalem Theater square to the Nature Museum on Emek Refaim Street in the capital marking 60 years since “Naqba Day", or “catastrophe” of Israel's inception in 1948. (YNET) 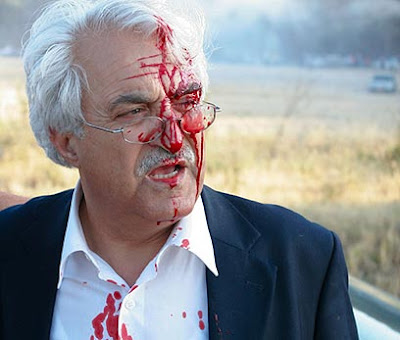 This past Friday, Naqba activists led protesters from Nazareth towards the deserted ruins of the village of Suffurriye – today's Zippori.

Across the road, a peaceful group of Israeli volunteers from the "If you will it" organization were enjoying a Yom Ha'Atzmaut picnic, yet their raised Israeli flag raised the ire of the Naqba marchers.

The situation quickly deteriorated into a full scale Naqba riot. The police claim that the demonstrators wild incitement seeking provocation caused the riots. However, the rally attendants, including Hadash Chairman MK Mohammad Barakeh said that the riots were caused because the police did allow the rally-goers to properly disperse.

Just one thought; I'm very thankful that this isn't Israel's "Naqba" and the Arab's "celebration." I doubt they would have let us live long enough to commemorate anything. Israel's Old City of Jerusalem from 1948 to 1967 is a perfect example of what would have happened...

The Purple Parrot came up with a much better name for her Naqba post, "N Na Naq Naqba"...(where every day is Naqba day.)

Hadash Chairman MK Mohammad Barakeh claims it was an undercover policeman who was dressed as a rioting Arab who threw the stone that hit him in the head.

Joe, I guess you didn't read my post then...

pp: What's the link to your blog?

Ahh, I see I got a mention! Cool.
And no Molotov cocktails followed it. Hmmm.