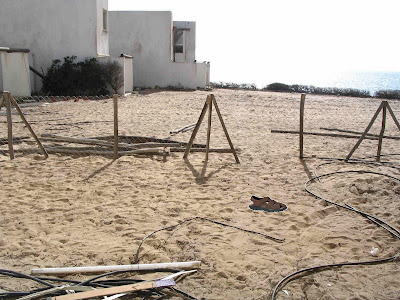 The Palm Beach Hotel at the Neve Dekalim beach,
days before it was bulldozed in 2005.

As the Jewish communities of Gush Katif commemorate 1000 days since their eviction and the destruction of their homes by Israel, the "Sela Disengagement Authority" issued the following statistics this past Sunday at a press conference in Ashkelon:

40.2 percent of the Gaza evacuees are still waiting for lots on which to build their new homes.

Ex-Prime Minister Ariel Sharon and the Israeli government promised that the resettlement process would take up to two years, and promised on the SELA eviction website [though not anymore] and in paid advertisements that there was a "solution for each settler."

The blatant callousness of the Israeli government and of Disengagement supporters who do not spend every second of their days trying to help the solve the refugee problem they created is simply mind-numbing.

One thousand days have passed.

Helping children cope is a new book, "Eyal's Sandal," written by Ruth Etzion, previously from the Katif community of Morag and illustrated by Sarit Stern. A young boy, Eyal loses a sandal when playing on the sand dunes near his home in Gush Katif. His faithful sandals always waited as a pair for him while he played in the sand dunes, so it can't be far. However, the Disengagement dashes his hopes to find his lost sandal, as he and his family are removed from Gush Katif and his sandal.

The book poignantly describes the difficulties in living in Gush Katif prior to the Disengagement, the trials of a child trying to come to grips with a difficult future, "Abba, are the same soldiers who I love so much going to be the ones throwing us out of our home?"

Despite it all, the book ends optimistically. Even if your family didn't go through the Disengagement, this book is a must for every Jewish family to understand what their fellows Jews went through, and are going through today.

I translated the Hebrew from a page of the book -- the Hebrew rhymes and is extremely well written. My translation does not rhyme and is for those who can't read Hebrew at all... 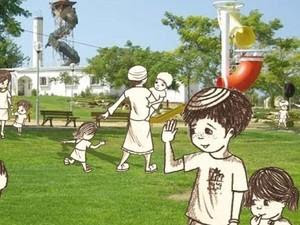 I had my own prayer, it was only mine, that I payed for Gush Katif that we would always live there, and that there would be no expulsion 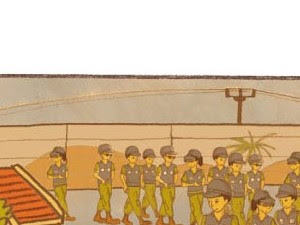 From that day on we slid down it, rolled around on it barefoot and content
And when we would finish playing, always waiting faithfully for me, was my pair of black sandals.

This posting is not a paid advertisement.

Published by Beit-El for 39 NIS.

Not to worry -- my next expulsion will be handled much more efficiently and professionally. I'm planning to appoint my good buddy Morris Talansky to head up the Expulsion Authority this time. I know from experience that he can always be trusted to come through with the payments. And if any of the refugees wind up out in the cold anyway, they can just come crash at my spacious pad on Cremieux Street.

sorry, but those rhymes were bad.