Israel's Ministry of Defense houses the "Izkor" Remembrance Project Web Site, which documents every single soldier to have died for Israel. Following is the story of Nissim Gini, wounded in the battle defending the Old city of Jerusalem on May 27th, 1948, and he succumbed on the following day, May 28th, 1948. 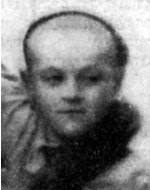 This is his story (translated by me)

Nissim Gini, son of Miriam and Yitzchak, born in 1938 in the old city of Jerusalem, where he lived his entire short life from beginning to end. He learned in school till the Israeli War of Independence in 1948 and Siege against the Old City of Jerusalem interrupted his routine life.

When the battles started, he volunteered, as did his young friends, to defend his city and birthplace -- and demanded a position [in the army]. Without telephones or wireless radios to communication between military positions in the winding alleyways, he was given the task of being the communication "runner" between positions -- which he did with adult responsibly and faithfully amidst hailstorms of bullets and the thundering of bombs.

He requested a handgun in case he be faced by an Arab solider, but his request was rejected. On the 27 of May, 1948, when one of the Jewish positions fell, he was seriously wounded, and he died a painful day later on the 28th of May, 1948, the 19th of Iyar, 5708. He was buried in the Old city.

He was ten years old.

The youngest to fall in Israel's battles.

His name is inscribed on the monument at the Har Herzel military cemetery for the victims of the battle for the Old city of Jerusalem, and he was reburied on Har HaZeitim, the Mount of Olives.

This Independence Day, remember him and the rest of Israel's soldiers, killed and wounded so that we can continue the dream.
Israel: Live the dream.
Wherever I am, my blog turns towards Eretz Yisrael טובה הארץ מאד מאד
Posted by Jameel @ The Muqata

Email ThisBlogThis!Share to TwitterShare to FacebookShare to Pinterest
Labels: Israel at 60

That is an amazing story. I had never heard it before.

Gershon Bar Kochba, historian and entertaining lecturer, talks about all the children who fought (and died) defending the Old City during the War of Independence.

It is worthwhile to hear his presentation on this topic.

So you're saying it's ok for children to be combatants.

Anonymous: So you're saying it's ok for children to be combatants.

Good point. I guess it's better for them to be dead.

thanks for sharing this great story. wow.

thanks for sharing, jameel.

the kid did die. because he was a combatant.

don't see how you can condemn the palestinians for using child soldiers or civilians for cover when you praise the jews for doing the same.

anon- it's not "doing the same", and you know it: Not sure what you're looking to get out of leaving these kind of comments on this blog, but trust me, you aren't going to find it here.