6:04 PM - Rocket (Grad/Katyusha) hits Kupat Cholim building within Ashkleon. Many wounded reported, unsure if they are victims of fright or wounded by shrapnel/explosion.

6:07 PM - Many trapped in rubble of the building. No estimates yet of # wounded.

6:08 PM - Wounded being evacuated to Ashkelon's Barzilai hospital by ambulances.

6:10 PM - No warning siren sounded prior to the rocket strike. Channel 10 reports dozens of wounded. Most of them are probably from fright.

6:23 PM - Another rocket landed in the shuk area of Ashkelon. Channel Two reports the Palestinian rocket launches came from the destroyed settlement of "Dugit" in the Gaza Strip which were evacuated as part of the Disengagement.

6:33 PM - Over 20 lightly wounded (shock/fright) being transported to hospitals 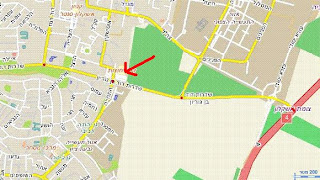 6:50 PM - Channel 10 reports the Grad rocket that hit the shopping mall was smuggled into Gaza from Egypt and is manufactured in Iran.

6:56 Pictures from rotter.net of rocket attack on shopping mall. 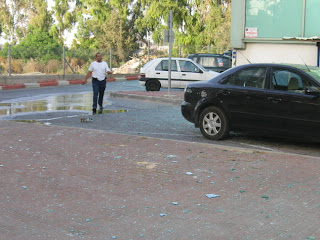 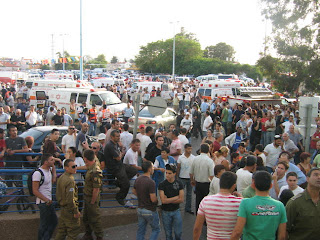 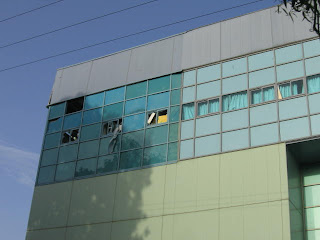 6:58 PM - Reports that one of seriously wounded is a 2 year old baby girl -- both legs were severely wounded in the attack.

7:09 PM - Shas MK Eli Yishai cancels dinner plans with George Bush and Ehud Olmert -- he is now on route to Ashkelon to meet the wounded.

7:11 PM - pictures of the rocket hit inside the Ashkelon shopping center 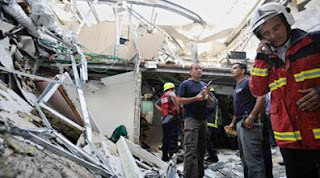 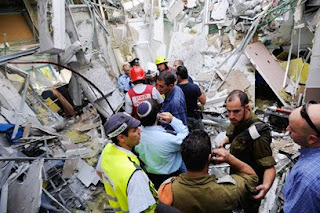 What better welcome could George Bush expect? Perhaps he and Olmert should visit the wounded in Ashkelon now as well? Cowards.

Will this be mentioned in the international press? Probably not. Or maybe two or three days later, when it has been "nuanced" and spun by the usual bunch of propalliniks.

This is beyond contempt but not surprising. A heartfelt welcome to President Bush from his Palestinian partners.

the back of the hill,

Well, it's on the nytimes.com homepage right now.

mad props to that crooked sleaze eli yishai for passing up a dinner with bush and olmert, and heading down to ashqelon.

This is just terrible.

BACK OF THE HILL:

"Will this be mentioned in the international press?"

oh please, don't be so dramatic. of course it will make it into the international press . . . after israel retalites. this way the press can mention the attack within the "context" of the cycle of violence that plagues the region.

shameless self promotion ahead . . .

if you are one of jameel's readers who is interested in aliyah and would like to find a girl to live with there, visit:
http://agmk.blogspot.com/2008/05/where-to-pick-up-nice-israeli-girl-on.html#links

oh please, don't be so dramatic. of course it will make it into the international press . . . after israel retalites. this way the press can mention the attack within the "context" of the cycle of violence that plagues the region.

Well, Lion of Zion, it very much looks like you will be proven right.

The BBC mentioned it, in passing, in an article about the IsrIntel report predicting greater range for Pally rockets within the next two years - did not see an article actually describing what happened in any detail.

Briefly glanced at the German press, did not notice any mention of Ashkelon.

The Khaleej Times however did mention it:
Army ready for Gaza assault after rocket attack: Israel

JERUSALEM - Israel warned on Thursday that its forces were prepared to launch a major military operation in the Gaza Strip after a rocket attack that wounded at least 14 people while US President George W. Bush was in Israel.

The Khaleej Times can be found here: http://www.khaleejtimes.com/Index00.asp

They are worth reading, being infinitely better than a Dutch newspaper, and better also than most European news sources.