Olmert plays his "get out of jail free" card 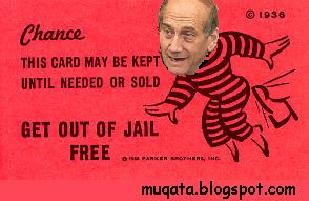 In a last ditch attempt to save his skin from prosecution, Israel's Prime Minister Ehud Olmert played his trump card only minutes ago.

The Prime Minister's Office announced Wednesday that Israel and Syria have launched direct negotiations in Turkey.

Ynet has learned that Prime Minister Ehud Olmert's associates, Yoram Turbowitz and Shalom Turgeman, have been meeting with senior Syrian officials in Ankara since Monday.

A dramatic statement issued simultaneously in Jerusalem, Damascus and Ankara said that "Israel and Syria have launched peace talks mediated by Turkey. (YNET)

This morning's radio talk shows, newspapers and TV news were all about Olmert's impending demise as Prime Minister. Elections talk was in the air, Tzippy Livni was ironing her suit, and it seemed absolute that Olmert would resign in shame, after the High Court of Justice rejected Tuesday Prime Minister Ehud Olmert's appeal against the State Prosecutor's request for a pre-trial deposition by Morris Talansky, the key witness in the corruption probe against the PM. (YNET)
Despite the spam mail circulating on the internet, in which Olmert requests your assistance to help retain his fortune, his latest tactic of using a "peace" deal with Syria is bound to make the peace-hungry Israeli establishment quickly forget about any wrongdoings Olmert may have committed.

5 hours ago, political eulogies were written for Olmert.

But you know what they say: when in Turkey never, but never, bend down to pick anything up - even a peace agreement.

And on a completely unrelated note...

Why does the "Nofei haPark" ad on the right side of the blog page have a picture of the Yeshivat Har Etzion beit midrash building?

That's actually an easy one.

The Barkan company built it so they made it their logo.