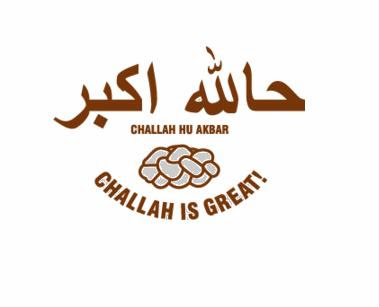 This Shabbat -- the one right after Pesach is when many Jews bake "Shlissel Challah" -- Challah in the shape of a key (or a key baked inside the Challah). It's considered a segula for all sorts of good things...

Orthomom (remember her?) found all the sources last year:

2. According to Kabbalah on Pesach the gates to heaven were open, and following Pesach the lower gates are shut, and it's up to us to open them again, therefor on the 1st Shabbat we put the key on the challah to show that through the mitzvah of Shabbat we are opening the locks [original source?].

3. In the desert the Jewish people ate from the manna until after Pesach upon entering the land (with the bringing of the Omer, see: Josh. 5:11), at which point the ate from the produce of the land, and became dependant on their livelihood for the first time (now they had no manna). The key in the challah after Pesach is a request the God should open the Sha'arei Parnasah (gates of livelihood). Alternatively, the manna began to fall in the month of Iyyar, and this Shabbat is always Shabbat Mevarchim Iyyar.

See: Sefer Ta'amei HaMinhagim, pp. 249-50.
See: Encyclopedia Judaica, vol. 6, pp. 1419-20 for a photo of a shluss challah (and other "special" challot). It seems (from both of the above sources) that the minhag was to bake the key on top of the challah not inside (a la the old jail break trick).

Josh Waxman in the parsha blog also had more on the subject.
But the source I'm familar with is from the Sefer Ta'amei Minhagim that says it's based on the pasuk, 'יפתח ה' לך את אוצרו הטוב את השמים לתת מטר ארצך בעתו' 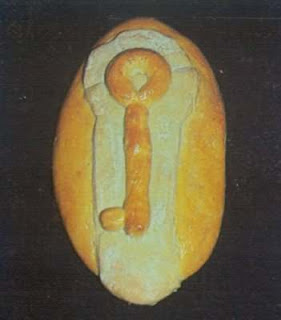 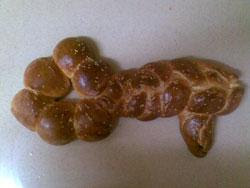 Anyway - we bake a key into the challah. Much easier that braiding the dough into a key.

PS: Hat-tip to CK from Jewlicious for the Challah Hu Akbar graphic (apparently :)

Wow. I learned something today.

And that first graphic? Mildly offensive, yet extremely funny.

Are you telling me I should start baking challah again?

John: Come back and visit more often :) (And how was the graphic offensive? were you offended by it?)

Oh geez. I can't believe you used my Challah Hu Akbar graphic for a post on Shlissel Challah. In honor of that I wore my challah hu akbar shirt to the shuk today. Fun times, fun times...

My challah is made - with a key in. Thanks for the sources Jameel! May we all be zoche to (positively) answered prayers, good parnassah and of course the geula shleima bimahera biyameinu!

i shaped a key and baked it on top of my challah... my husband was so surprised to see homemade challahs in the kitchen!

My daughter just baked a challah in the shape of a key and one in the form of a magen david (for yom haatzmaut) (and she just said she also placed a key in one of them, so we're "yotzeh" according to all opinions :)

CK: It's your design?! I found it ages ago and didn't know it was yours...but I'll give you a hat-tip!

Quick, go check my blog and see what I did!!! There's still a few minutes to Shabbat!