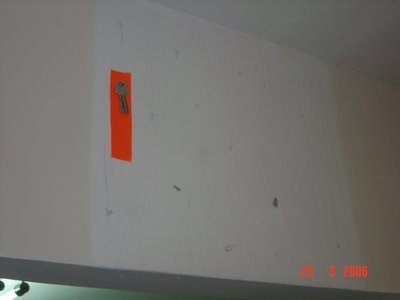 There's an old Jewish Jewish custom to have a remembrance in your home of the destruction of the Jewish Temple 2000 years ago -- and many have a 1.5 foot x 1.5 foot unpainted square as a reminder. No Jewish home should be "complete" as long our national and religious aspirations haven't been fully realized.
During this past summer's disengagement, we helped out some friends from Neve Dekalim, and packed up their home after they had been "officially" thrown out of it. In less than 12 hours, we took their entire home of 16 years and packed it into boxes. We took apart all their closets, bookcases, and wrapped their breakfront, dining room table and chairs in plastic.
The hardest part was taking down the mezuzot off the door frames, and tearing kriya before leaving.
That was this past summer.
Our friends visited us this past shabbat and noticed an addition to the unpainted remembrance in our home -- a small snippet of an anti-disengagement orange ribbon nailed into the unpainted space on the wall.

And on the nail are the keys to their front door, from their home in Neve Dekalim, Gush Katif.
We try not to forget.
Here's a posting I found tonight on another blog as well.
Politics aside, elections aside, it is inconceivable that seven months after the disengagement, these people are still being treated with such malice by the Israeli government.
Elections are coming up in less than 58 hours, and its still not clear who to vote for. Never before has it been so difficult to decide on who to vote for, who not to vote for, and what is the best possible outcome of the election.
Our guests and I decided that regardless of the outcome of the election there is still a tremendous amount of work to do and the challenges that await us are daunting.

Hopefully tomorrow I'll blog my answer of who to vote for.

Very nice! I found a place where you can
make some nice extra cash secret shopping. Just go to the site below
and put in your zip to see what's available in your area.
I made over $900 last month having fun!

thanks for the link to the frumfemale's post about this.

The orange ribbon is a very nice thought and quite poignant. The keys, however, have an arab flavor to it.

The Gabbai: Maybe...but its very personal this way.

What do you think would be more appropriate -- the mezuza from their door?

When I started reading I was thinking... wow, we are all on the same wavelength about this... then I saw your link... thanks. I just cant stop seeing in my minds eye that last day when they were forced out... and seeing how those girls were praying and crying... and of how some soldiers just couldnt go thru with it and joined the people who were interlocking hands... I get chills just thinking about it. Good luck voting.

Jameel- my family used to smear honey in that corner before rosh hashona so that there would be a zecher l'churnban but also a symbol for a sweet turnout. So it is a very personal thing and yours is very poignant.

I'm glad you posted the picture like I had wanted you to. It is more beautiful when you see it. Thanks

that actually made me teary.
please, vote well.

Sabra: Arabs who fled Yaffo and Haifa in 1948 used to keep the keys to their houses on necklaces.

Poignant. I just don't have any more words...

I remember watching the video I think frumgirl was referring to(I downloaded it from your site)and crying watching the same scene. I don't remember the soldiers joining hands with the praying girls but maybe that was a lit bit later on. Anyhow, Gush Katif lives with me,lives on with us. Personally, I will never forget my one and only visit there and my conversations with a former "settler" from Neve Dkalim.

It was a beautiful, flourishing place where Jewish kids were brought up with the spirit of Zionism and Judaism and the fighting spirit of our people.I hope the government, now with smolmert at the helm doesn't completely ignore the dislocated "settlers'" rights.

Very nice! I found a place where you can
make some nice extra cash secret shopping. Just go to the site below
and put in your zip to see what's available in your area.
I made over $900 last month having fun!
make extra money

Very nice! I found a place where you can
make some nice extra cash secret shopping. Just go to the site below
and put in your zip to see what's available in your area.
I made over $900 last month having fun!