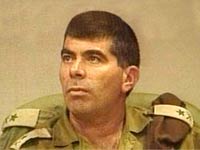 It's official -- the 19th Chief of Staff for the IDF will be Gabi Ashkenazi.

1. I'm very happy to see Dan Halutz leave, especially under the humiliating circumstances that he resigned. His arrogance towards the residents of Gush Katif and soldiers during the Disengagement; the cold, calculated sale of his investment portfolio after hearing the news that 2 IDF soldiers were kidnapped on the Northern border this past summer, instead of thinking exclusively about their return and what the IDF should do ensure their return; his arrogance during the war this summer, and of course, the depressing way that Israel lost the war without accomplishing any of the stated objectives. Good Riddance. Though I have a sinking feeling we haven't heard the last of him. Halutz will probably emerge sooner or later in the Labor party. Apparently, I'm not the only one who thinks that appointing Halutz in the first place was a mistake.

2. Gabi Ashkenazi has a few good points in his favor; he comes from a Golani infantry background (unlike the Halutz you-can-win-wars-with-surgical-strikes methodology). He was in the running for Chief of Staff against Halutz, but Sharon opted for the person who would most successfully carry out the Disengagement (instead of who would be mostly likely to protect the country in a war). Good Luck General Ashkenazi!

3. General Moshe Kaplinsky was the contender for the spot of Chief of Staff against Gabi Ashkenazi. He decided to pull himself out of the race, which in my opinion is an honorable step far above anything we have witnessed in Israel in the past 5 years. Prime Ministers refuse to accept responsibility for anything, and then Olmert cynically calls up Kaplinsky to praise his "courage" (while probably laughing hysterically after hanging up the phone that Kaplisky's such a frier). We've seen criminal investigations against Presidents, Prime Ministers, Ministers and Members of Knesset and they refuse to take themselves out of the equation. Halutz only resigned after tremendous public pressure (and 5 months after the war). Here, we see a rare instance of an individual removing himself from the race for Chief of Staff for the sake of the country. This sort of behavior is exactly what the IDF needs to see, and not the likes of our political echelons or Dan Halutz.

With Ashkenazi running the IDF and Kaplinsky staying in the IDF despite dropping out of the race, I think we have a fighting chance for the IDF to rehabilitate itself and get us ready for the next war.

Now, if only we could find someone worthy in the political establishment...

I noticed on his gov web page that he was involved in the Entebbe operation, though it doesn't say in what capacity. (And the head of military intelligence was one of those involved in bombing the Osirak reactor.)

Jameel, while this might be a good start I dont know, Halutz was a political appointment who should never have been made head of the army, how do we know Ashkenazi is different? The IDF has deep flaws that cant be fixed with the replacement of one general.

KL: Yes, the flaws in the IDF run deep, but replacing the head is a good start. We'll see where go goes from here. I try to give some benefit of the doubt, since the alternative is much more depressing.

A former Israeli special ops guy is regularly interviewed on one of the major stations here in LA. He hated Halutz and his first choice for Halutz's replacement was Gabi Ashkenazi, so I think the IDF might be in good hands this time around. Obviously only time will tell, but I feel optomistic...