JPost: Biting the Hand that Reads You? 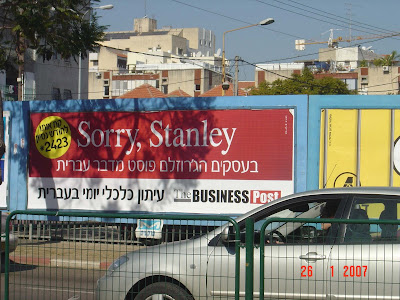 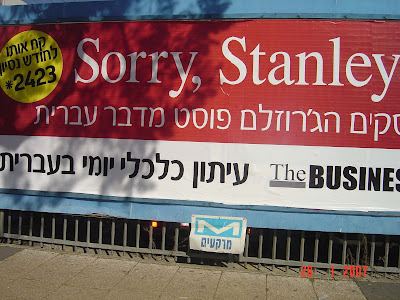 This post will probably kill my chances for being ever linked to the Jerusalem Post again, but I'm so annoyed at their current ad campaign that I had to post about this.

Last week, while driving through Kfar Sava, I saw the above huge red billboard.

Sorry, Stanley.
What the heck?

An ad for the Hebrew-only business magazine of the Jerusalem Post -- it's a nasty swipe at the head of the Bank of Israel, Stanley Fisher.

Stanley's an American, who was brought to Israel by then-Finance Minister Netanyahu. With an impeccable record, it's about time that Israel appointed professionals, rather than petty, incompetent political hacks -- even if they are "imported" from outside of Israel.

So, the ad people working for the Jerusalem Post thought it would be "clever" to make fun of the fact that Stanley Fisher is "imported from America" and they attempt to imply that his Hebrew is sub-par to understand the Hebrew-language Jerusalem Post Business Magazine. (FYI, his Hebrew isn't bad at all)

Not only are they insulting one of the most respected people in Israel's financial community, but *I* was insulted.

Making fun of olim for their lack of Hebrew skills?

And from the company that runs the primary English Language paper in Israel?

What the heck are they thinking at the Jerusalem Post? 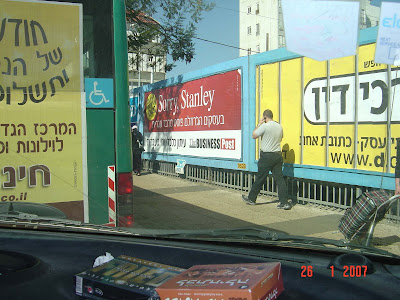 A special thanks to my wife for taking the pictures of the billboard for the blog while we were driving :)

On second thought, it would have been much funnier is if they wrote:

Olmert: You won't be able to read this in jail!

It just epitomizes the attitude of this country toward ENGLISH speaking Olim.
-OC

"The other week"...hmm, more like 3 or 4 weeks ago, if I recall the conversation over Shabbat lunch...

OC: True... When we have more Olim here, we'll be able to make more of a difference.

There is also a "Sorry Bush" version of the billboard that I see on my way to Tel Aviv every morning. I think that you are taking this way too personally.

Cosmic: I only saw the "Sorry Stanley" version for a few weeks in different places. Perhaps when not enough people "got it", they changed the campaign to "Sorry Bush" and "Sorry Blair".

You think the "Sorry Stanley" one is appropriate?

The campaign is stupid. But then so are most Israelis, placing such a high social value on English, and "Chutz La'Aretz"

(yes, that was just me who said that)

To me this is only slightly offensive. What's much more offensive, to me at least, is the way that the Post capitalizes on the lack of competition in the area of English news in Israel to spit in the eye of its own readers.

Look at a typical Nefesh B'Nefesh flight and then read the Post. See any similarities? Neither do I. You'd think that every English speaker in this country agreed that settlers are evil, and, of course, lived in Tel Aviv.

And is there any way to get a restaurant reviewed if it doesn't serve pork or calamari??

The Jerusalem Post's editorial policy seems to be to try and (barely) stay just to the right of Ha'Aretz. I'm not sure that they are successful even at that.

Ezzie: I got those Avraham Fried CD's from "Hatzala" (for being a volunteer). For the time being, they are just keeping up space on the dashboard :)

It's a stupid campaign for a stupid newspaper (excluding Caroline Glick and a few others).

Definitely stupid, but not as bad as the campaign's TV commercials, where they've got someone speaking Hebrew with an American accent doing the "sorry, Stanley" bit (if I remember correctly) then talking about the new publication.

Did that just sound anti-Semitic?

not so clever that ad campaign.

Ahh! Ezzie, you beat me to the Fried comment.

What an offensive campaign. JPost exists because of successful, intellectuals like Stanley Fischer. On the other hand, their brand of reporting and commentary (besides Glick, of course) is decidedly Israeli press-like.

Let's all switch to B'Sheva!

I remember during the Lebanon War that one Israeli blogger dedicated a couple posts to making fun of and putting down Americans who attended pro-Israel rallies. All I could think is, "what the heck do you want from us?!" When we go to rallies and send money we are made fun of for investing too much of who we are in Israel and when we don't Israelis complain that they are all alone in the world.

bubbelleh,
jameelilke,
you got it wrong
The jpost will love you, adore you, for giving them all that free advertising.

It's even stranger for this to be coming from the Jerusalem Post.

The more olim who come, the better -- maybe we'll have a chance to change things :)

The ad campaign sort of reminded me of these bumper stickers, truth be told.

Anyone who has read the Jerusalem Post daily might want to reinterpret the ad: "Sorry, Stanley" is an apology to intelligent Anglo professionals living and working in Israel--Stanley Fisher being the most prominent among them--for the shabby journalism, lack of original content, and pathetic (if at all extant) copy-editing.

jameel's point about bringing professionals into positions that are normally filled by party hacks is an important one.

other than that, i think all you american expats in israel need to lighten up a little bit.

"The Jerusalem Post's editorial policy seems to be to try and (barely) stay just to the right of Ha'Aretz. I'm not sure that they are successful even at that."

that is really not true.

Chevre - is anyone writing to the POST about this? Seems to me that if their readership complains to them directly it might have more of an effect. I also wonder if they have a different marketing department/agency for the Hebrew paper ...

Jameel,
I wrote this on January 27 in response to http://muqata.blogspot.com/2007/01/welcome-to-muqata.html

No one that has any interest in accurate reporting would be caught dead reading that wishy washy rag.

This is the same publication that has institutionalized Hebrew illiteracy by providing a 2nd grade level English rag for new immigrants to use as an excuse to not learn Hebrew.

Now they have the audacity to make light of Stanley Fisher's lack of fluency?!

When they dumped Winkey's column, I dumped them.

Anyway, don't write them, don't read them, Just dump them!

Could someone post a picture of the Sorry Blair campaign. I have a good friend named Blair who would get a kick of seeing that is name is being plastered all over Tel Aviv. Unfortunately I live in the North and haven't seen the poster
Thanks in advance