Instead of a posting roundup of blog posts like Ezzie and others, here are the topics I'd love to fully blog about today, but alas, don't have time. However...trust me, it's worth reading through to the end, as I've included a dozen pictures from a recent Muqata excursion :)

"We know we are described as enemies of the Americans. About Americans, we say, publicly: the central, head enemy to the Arab Palestinian people and to the national struggle, is this American leadership embodied by the White House and this George Bush sitting there"

Makes you wonder why the US is so ardent in their support of the "moderate" Fatah militia, while telling the world, "Hamas are the evil ones." And you also have to wonder why Olmert keeps kissing PA President Abbas, when the Fatah people are the ones shooting Qassam rockets at Sederot.

Today's PA Gaza scorecard: 5 killed, 10 kidnapped. Four of the killed are from Fatah, one bystander. The 10 people kidnapped were both from Hamas and Fatah.

Guys, aren't you all on the same team?

"I'm sure that soon we will observe the collapse of the Zionist regime (Israel)," the official IRNA news agency quoted him as saying, without elaborating.

I wouldn't mind certain Zionist regime elements disappearing, like those involved in our latest tax authority scandal. (The US and EU aren't thrilled either)

3. Good News! Yeshiva University in Israel is organizing a Magen David Adom blood drive for their students in Israel; The event will take place this Friday, January 5, from 10 a.m. – 1 p.m. in Zion Square. Minimum Requirements (I had to know this last week, when I helped out at a blood drive...there are more requirements, but these are for starters); You must weigh at least 110 lbs. (50 kilo) -- NO EXCEPTIONS. Your systolic blood pressure must be at least 100. You should not have been sick the past week. Go out and donate blood (if you can). It's important and we need the blood.

Two more candidates have thrown themselves into the running for a Darwin Award. The feet of Jason and Sara, both 21, were found protruding from a deflated, huge helium advertising balloon. Jason was a college student, and Sara attended community college, but apparently their education had glossed over the importance of oxygen.

When one breathes helium, the lack of oxygen in the bloodstream causes a rapid loss of consciousness. Some euthanasia experts advocate the use of helium to painlessly end one's life.

The pair pulled down the 8' balloon, and climbed inside. Their last words consisted of high-pitched, incoherent giggling as they slowly passed out and passed into the hereafter.

Sheriff's deputies said the two were not victims of foul play. No drugs or alcohol were found. The medical examiner reported that helium inhalation was a significant factor in their deaths. A family member said "Sara was mischievous, to be honest. She liked fun and it cost her."

This runner up was close to winning as well.

2006 RUNNER UP: Hammer of Doom Darwin Award -- Confirmed August brought us a winner from Brazil, who tried to disassemble a Rocket Propelled Grenade (RPG) by driving back and forth over it with a car. This technique was ineffective, so he escalated to pounding the RPG with a sledgehammer. The second try worked--in a sense. The explosion proved fatal to one man, six cars, and the repair shop wherein the efforts took place.

Of course, we are truly sorry that there wasn't more representation from our neighbors; they won in 1999. (Confirmed on the official Darwin Award Website)

5 September 1999, Jerusalem In most parts of the world, the switch away from Daylight Saving Time proceeds smoothly. But the time change raised havoc with Palestinian terrorists this year.

Israel insisted on a premature switch from Daylight Savings Time to Standard Time to accommodate a week of pre-sunrise prayers. Palestinians refused to live on "Zionist Time." Two weeks of scheduling havoc ensued. Nobody knew the "correct" time.

At precisely 5:30pm on Sunday, two coordinated car bombs exploded in different cities, killing three terrorists who were transporting the bombs. It was initially believed that the devices had been detonated prematurely by klutzy amateurs. A closer look revealed the truth behind the explosions.

The bombs had been prepared in a Palestine-controlled area, and set to detonate on Daylight Saving Time. But the confused drivers had already switched to Standard Time. When they picked up the bombs, they neglected to ask whose watch was used to set the timing mechanism. As a result, the cars were still en-route when the explosives detonated, delivering the terrorists to their untimely demises.

5. With the upcoming weather forecast for a rainy weekend, it's unclear if our Shomron tiyul to the Samaritan community on Har Grizim will take place tomorrow. (Yes, I know I still have to finish the posting with pictures from the last one). So, I'll leave you with some sunny pictures from our family trip to Eilat this past Chanuka.

Driving down to Eilat... 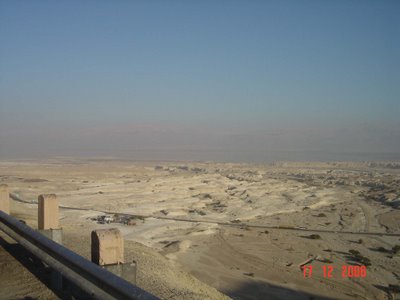 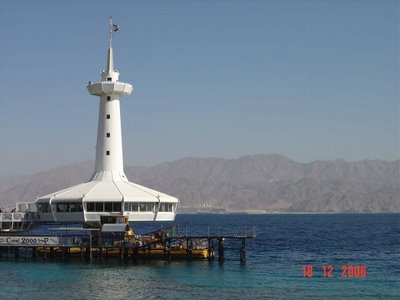 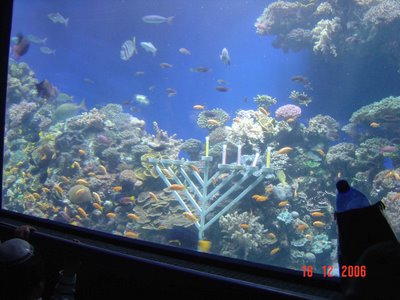 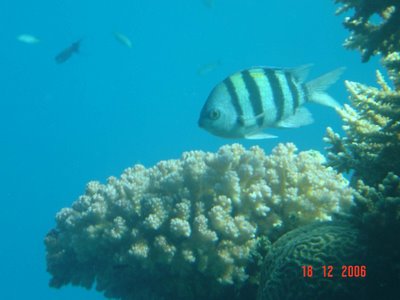 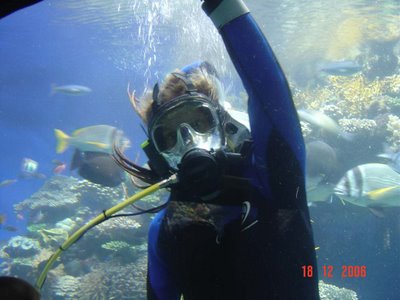 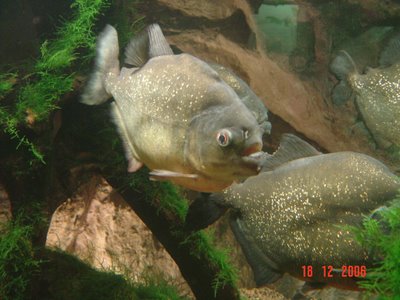 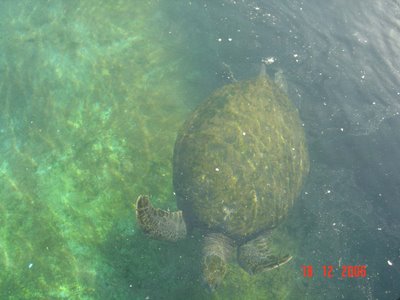 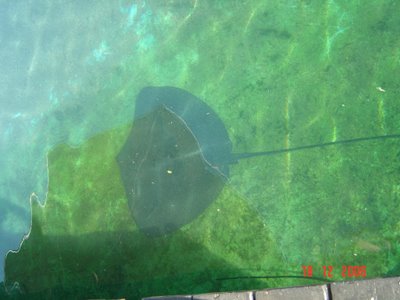 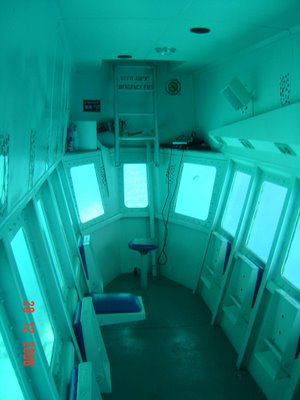 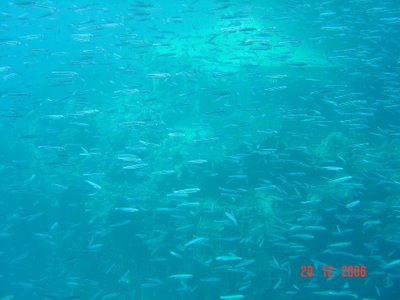 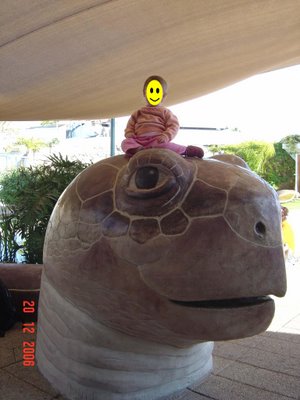 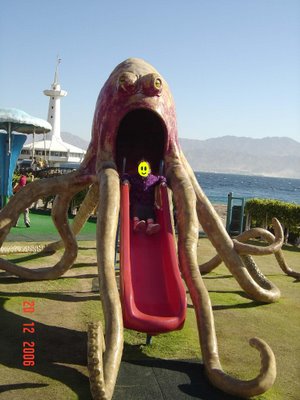 Motor Boating in the Red Sea. 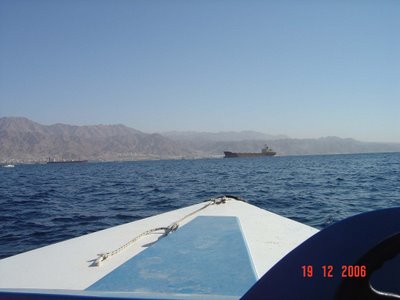 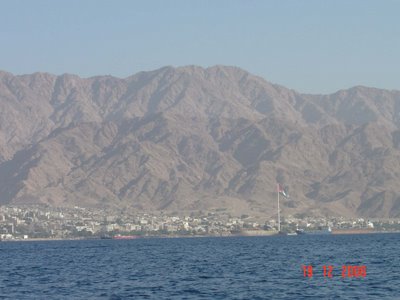 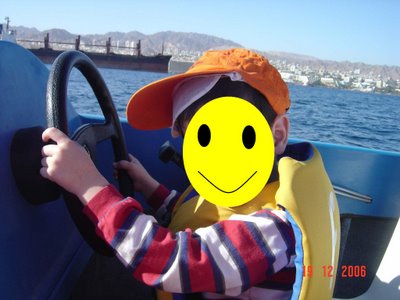 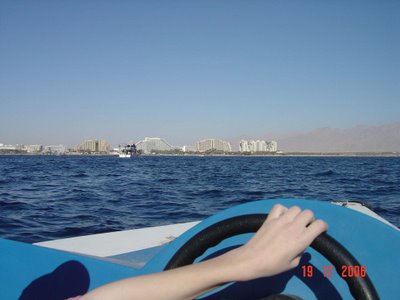 A photo of the Snack Bar Menu in our hotel. 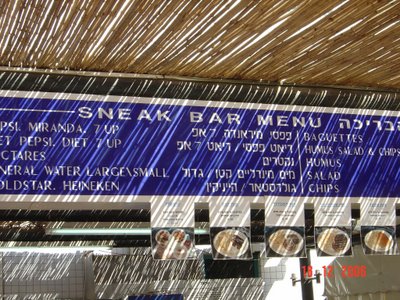 A top secret installation in the Negev, which Ehud Olmert disclosed 2 weeks ago in an interview with German TV. 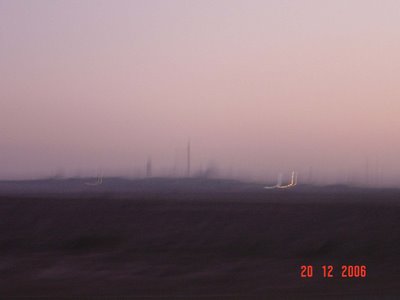 Shabbat Shalom...and a very rainy Shabbat to us all!

(Been out of it for a while-I am finally back in the bloggin world...)

Have a great Shabbos!

fish menorah pic looks familiar
thanks for postin these

Is a "Sneak" Bar something different than a "Snack" Bar? "Sneak" sounds like an Israeli spelled "Snack" with an Israeli accent. Cute.

I think I should put up a posting up of poorly spelled signs from Israel.

There are MANY of them.

My favorite was on road 40, near Mishmar Ayalon. The sign said in English:

Do you know what that is?

I don't think I would've gotten in the mouth of that octopus as a kid. one of my siblings would for sure tell me it would swallow me and I'd cower in fear. I have a cute sign to send you that supposed to be in english, and it's from the US.

If your tiyul isn't cancelled, you gonna come pay me a visit? I'll even make a fresh pot of brew for ya.

Moze: I can't do that if I don't know which yishuv you're in!

Besides, I'd rather make waffles here ;-)

great pics! looks like you had a great time in eilat.
can't wait to see the har grizim tiyul ones.

mispelled signs in israel were always amusing. like 'shave' shomron is the one that comes to mind.

That looks like the same boat I was taken on in 1973. I have some of the exact same pictures. (But not the octopus or the menorah.) Including the picture of the top secret air base at the foot of Mt. Carmel. (Tour guides exact words: "that's the top secret air base those F-14s use"--referring to the jets that had flown about ten feet over our head (at least, it seemed like it was only ten feet) as we we walking up to the top of Carmel.)

Um--Jameel--where'd you say you were planning to visit? Ergo, what yishuv am I in? And we have a waffle iron here, too, so if you'd like for next week... (Hey, we even had a former madricha from your snif here today, but not one your kids have had.)

Why one would have to be a complete ignoramus not to understand that Hebrew acronym transliterated into English! :)