There's an email going around Israel about the alleged silliness of doctors/patients/employers in Israel.

It shows an official "Doctor's Note" which is used to officially report an absence at work/school/IDF due to illness. 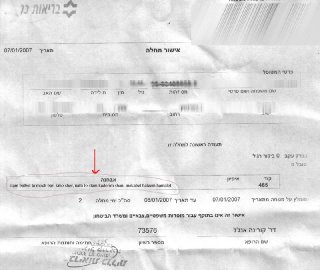 The diagnosis is written in English (Latin) letters, as is usually done in Israeli health-related official reports. The words however, are transliterated Hebrew.

Loosely translated: "This guy is just making up stories, he's as healthy as an ox. I gave him pills which I receive money for dispensing them"

At first, this sounds real funny.

A real doctor's name was signed and stamped at the bottom of the form, and it looked legit. Someone thought this was funny enough to send to YNET and they printed it, demanding an explanation from the HMO, Kupat Cholim Klalit -- how their doctor could write such a note?

Kupat Cholim announced they were going to question the doctor, and they viewed this matter very seriously...and this was all printed on the YNET site.

The story went to print...the doctor was humiliated, and everyone got a good laugh out of this. Channel 10 TV broadcast the story (with the Doctor's name) all over Israel. Over 451 talkback messages were reported on the YNET article (most of them deploring doctors in Israel).

The tearful doctor wasn't even given a chance before the YNET article went to print...Kupat Cholim didn't give her a chance to defend herself in advance either.

Only afterwards, when it was too late, did the doctor prove that the letter and pictures from the internet...were just photo-shopped.

YNET removed the first story, so here's the screen snapshot of it: 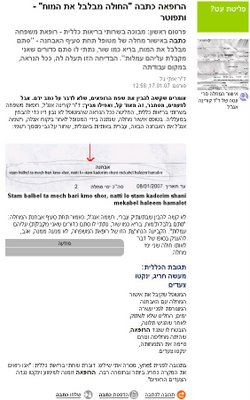 Great. So she still has her job. And YNET hasn't said a word (yet). Haaretz wrote up the whole story with their usual smugness, even though they are just as guilty of similar stories.

Let's be careful out there.

I got that email and did not believe it. I therefore did not forward it and simply deleted it.
While doctors might not be perfect, I would never expect a doctor to ruin his/her career by writing such a letter. It would be pure stupidity to do such a thing.

I got that email and did not believe it. I therefore did not forward it and simply deleted it.
While doctors might not be perfect, I would never expect a doctor to ruin his/her career by writing such a letter. It would be pure stupidity to do such a thing.

they ought to be sued.
Big Time!

at least the doctor is not president of the country. what an irresponsible media!

The computer program the doctors use is provided by the HMO. It is circa 1986 and is rife with bugs. Apparently it saves the ls reason for absence and adds it to the next patient's sick note.

I was in a rush and only when my office manager asked did I notice that my reason for absence was "accute vaginitus".

Not an easy thing to explain.

I was wary the moment I saw the excerpt - the transliteration is actually very inaccurate. Kind of how someone who's not fluent in Hebrew would hear the words rather than what they actually are (ex. m'balbel et ha'mo'ach).

Another example of everyone jumping to conclusions, a tone I echo in the post I wrote this morning. It's really a shame that we're all so quick to believe.

Like rafi, I got the email and deleted it. It just looked too crazy to be true.

In the last two years I've had a lot dealing with the health system in Israel (my own health condition, and my wife's pregnancy), and I'll just say this: The doctors seem to genuinely care about their patients. The system isn't perfect, but you can get the treatments you need, and the coverage is generally broad enough. I'll take the kupot system of the States' health care system any day.

bonecrusher: that is hysterical!

Thats terrible. The poor Doctor, their reputation is now all but destroyed, and on page 15 in tiny letters will be a retraction. What about on the Front Page?
Aaron
Visit: Bagelblogger

walla
exactly what i meant by my other comment.

Only when you look like me and have to exlain to everyone in the office that you really are a man.

Otherwise, it could be a really uncomfortable moment.

bonecrusher, I see your point. it's still worth a giggle, though...