Ive been real busy the past few days...but someone mailed me the following recorded video, allegedly of Hot Chanie in her younger years. Personally, I don't believe it since she doesn't look that frum in this video; but you can judge for yourself. (Video suitable for all ages, I wouldn't post it otherwise!)

And...in honor of Jack's postings here at the Muqata (it's been a year since he last posted), here's a video of him when he toured Cape Town a few months ago.

Of course, there's lots of stuff going on in Israel. Dan Halutz has resigned from Commander in Chief of the IDF. I can't say I'm sorry to see him resign for a multitude of reasons, ranging from his arrogance during the Disengagement, to his selling of his stock portfolio upon hearing the news of the kidnapping of 2 IDF soldiers which led to the war this past summer, to the total mismanagement of the war. The downside is, the IDF is rather bad shape now and we need an outstanding leader to get the IDF back into shape in time for the upcoming war. Of course, Israel also needs outstanding political leaders at this time as well, and the overwhelming majority of our leaders are rather...well...underwhelming. 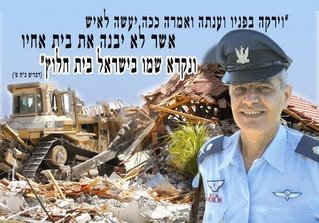 Thats all for now!

Heh. Beis Chalutz. Very funny.
I must admit, I was listening to the radio the other day, not the regular sonei Yisrael that I listen to (BBC) but the home grown ones, and I got dizzy from all the spin about Chalutz resigning.
He waited until he saw that there was a serious investigation going on into what happened with the war. Once he saw things were going along apace he knew things were in good hands and he could resign with a clear concience.

As Litvishe said, it's an ad for treif pizza

That is not Hot Chanie. She wouldn't be caught dead in that cap.

Mike: I didn't see any pizza in this video clip...

You have to watch the last video in the series.
Domino's Pizza to be exact.

Jack is such a dude!

"The downside is, the IDF is rather bad shape now and we need an outstanding leader to get the IDF back into shape in time for the upcoming war."

so who get's your vote?