"R HYAL IS IN MY SCHOOL"

"R HYAL IS IN MY SCHOOL"

That's the SMS message I got from my kid today on my cellphone during a meeting.

Honestly, the first thought running through my head was, "With all the money we're paying for his school, I really wish his English made more sense. I have no clue what he's trying to say."

After calling him to decrypt his message I found out what he meant;

"Our Chayal is in my school"

What he meant was, "Our Adopted Chayal" (IDF Soldier)

As with many settlements in the Shomron, we live near IDF outposts and bases -- and a group of paratroopers was in our area for the past 3 months. On shabbat, many would come at daven at our shul -- and of course, we would have fights in shul over the privilege of hosting soldiers for shabbat meals. Everyone wanted them for meals (not in a Hannibal Lector sort of way, you sickos!).

One solider who ate at our home was adopted by our kids and became, "Our Chayal" -- and the kids would always be on the lookout to see if he was in our neighborhood on patrol or davening at shul so they could drag him over for a meal.

So, what the SMS message meant, was the our adopted chayal was visiting my sons' yeshiva. They swapped email addresses with him, and he just sent the following cool picture from one of his training excersizes a few weeks ago. 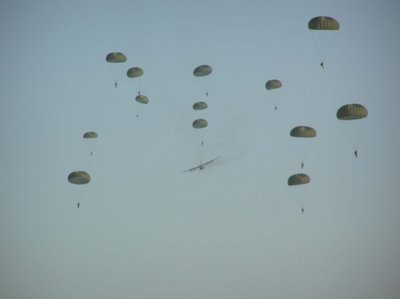 So, you can either adopt a soldier like we do, or perhaps what my wife's crazy cousin does. Whenever he sees a soldier in Jerusalem, he runs over and pays for his meal, felafel, pizza, or whatever he can find to show is gratitude. He showers them with money and thanks.

The soldiers think he's nuts, as they graciously accept whatever he throws at them.

For years, "our chayal" was my husband. Now that he's too old to serve (well, he volunteers, but not in tanks anymore - in Dover Tzahal) and my boys are too young, we would only be too happy to adopt a chayal of our own!

Some of my friends have very mixed feeling about their boys going into the army after the expulsions and Amona, but I still get a thrill of pride to see a Jewish boy in uniform. G-d protect them all!

My 4 yr old loves the soldiers. She calls them "green guys," and every time we see a chayal around town, she thanks him (or her) for stopping the booms.

The chayalim get a kick out of it.

kol hakavod, but he must have tons of extra money. there are chayalim all over the place all the time. every time he sees one he runs over and buys him a meal?

I'm too American. The first thing I thought of on seeing the title of this post was the Lovecraftian chant--Cthulu phtagn, etc.