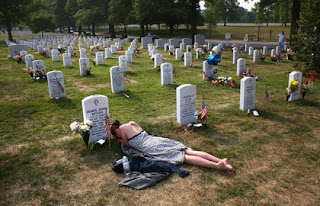 Last night during dinner I told my 12 year old daughter that it was Memorial Day weekend in the United States, and that Monday (today) was memorial day. She asked what "memorial day" meant, and I said, it's "Yom HaZikaron" for the Americans, remembering those who fought, were wounded, and died in America's wars.

She asked what they do in America to commemorate it -- here in Israel, it's an extremely solemn day, with a nighttime and morning one minute long siren blast across the country, public eateries are closed, movie theaters are closed, all radio channels have reserved music, and most of the country is united in pain, remembrance and comforting the families of those who fought for Israel.

The least I could do this Memorial Day, as an Israeli-American living in Israel, was to spend a few minutes writing about the sacrifice of America's soldiers and veterans -- and their families.

So how would I Google search for a picture? The obvious choice for me would be Arlington Memorial Cemetery. I was looking for of a photo of the solemn, seemingly endless rows of simple tombstones of America's soldiers. Yet while searching for the perfect blog picture, the photo (pictured above) hit me first. Taken last year at Arlington, Mary McHugh lies before the tombstone of her fiance.

I don't think she's running out to a sale or barbecue.

The beauty and serenity of Virginia’s rolling hills and awe inspiring views of Washington D.C. clash with today’s reality of national loss, where grief is raw and in your face. You step over grass sods still taking root over freshly dug graves. You watch a mother kiss her son’s tombstone. Two soldiers put flowers and a cold beer next to the grave of a fallen buddy. A young son left a hand-written note for his dad. “I hope you like Heven, hope you liked Virginia very much hope you like the Holidays. I also see you every Sunday. Please write back!”

Section 60 is not about a troop surge or a war spending bill or whether we should be fighting these wars at all. It is about ordinary people trying to get through something so hard that most of us can’t ever imagine it. Everyone I met that afternoon had a gut-wrenching story to tell.

Mary McHugh is one of those people. She sat in front of the grave of her fiance James “Jimmy” Regan, talking to the stone. She spoke in broken sentences between sobs, gesturing with her hands, sometimes pausing as if she was trying to explain, with so much left needed to say.

Later on, after she spoke with a fellow mourner from a neighboring grave, I went over and introduced myself and told her I was photographing for Getty Images and had brought my family on our own pilgrimage to the site. I told her we had been living in Pakistan for the last few years, how we had come back to the States for a few months for the birth of our second child.

Mary told me about her slain fiance Jimmy Regan. Clearly, she had not only loved him but truly admired him. When he graduated from Duke, he decided to enlist in the Army to serve his country. He chose not to be an officer, though he could have been, because he didn’t want to risk a desk job. Instead, he became an Army Ranger and was sent twice to Aghanistan and Iraq - an incredible four deployments in just three years. He was killed in Iraq this February by a roadside bomb.

Mary said that they had planned to get married after Jimmy’s four years of service were up next year. “We loved each other so much,” she said. “We thought we had all of the time in the world.”

After a few moments more, my beautiful wife, Gretchen, now almost 9 months pregnant, walked over with our two-year-old Isabella. Our daughter started climbing over me, saying “daddy” in my ear and pulling on my arm to come walk with her. I felt awkward and guilty about the contrast, but if Mary felt it too, she was nothing but gracious and friendly. I told her that I would forward her some photos of her from that day if she would like and she gave me her email address. We said our goodbyes and I moved on with my family through the sea of graves.

Later on, I passed by and she was lying in the grass sobbing, speaking softly to the stone, this time her face close to the cold marble, as if whispering into Jimmy’s ear.

Some people feel the photo I took at the moment was too intimate, too personal. Like many who have seen the picture, I felt overwhelmed by her grief, and moved by the love she felt for her fallen sweetheart.

After so much time covering these wars, I have some difficult memories and have seen some of the worst a person can see - so much hatred and rage, so much despair and sadness. All that destruction, so much killing. And now, one beautiful and terribly sad spring afternoon amongst the rows and rows of marble stones - a young woman’s lost love.

I felt I owed the Arlington National Cemetery a little time - and I think I still do. Maybe we all do. (John Moore/Getty Image News Blog, Memorial Day 2007)

Perhaps America needs a national moment of silence and a wailing siren similar to Israel.

If you don't appreciate the sacrifice of your country's sons and daughters, do you really deserve the shopping sale?

Memorial Day is definitely a day of remembrance here in Highland Park, New Jersey. We have a parade down the avenue. When my son asked me a few years back who are those old guys riding in a car, I could proudly tell him they are World War II vets who fought for the world's freedom.

While not everyone is overly caught up in store sale events, many seem to have forgotten what this day means. Thanks for writing and sharing this.

I was going to do a similar post, but you beat me to it. And did a great job.

Going to make sure I spend at least a few minutes talking to my kids about why we all have the day off today. Thanks Jameel. Well done.

BTW--being out and about today here in the Seattle area, there seems to be a real change from recent Memorial Days. Many radio stations are paying well-deserved tributes to the fallen. Yes, there are still those in the malls who are clueless, but they do not represent all of us. Many are very, very grateful for the hard-earned price of our freedom.

great post and very true. but i agree with the commenters who said that things are changing somewhat around here. most of us are very aware that we are losing our soldiers at a terrible rate and at terrible cost. we definitely spent some time remembering.

Wow. The story with Mary McHughy was so touching and moving. Thank you for sharing. And no- I never really thought about Memorial Day much. Now I can't believe I didn't! (just to show- it never pays to judge people. Here I was, living my life, thinking I was such a good person, and here comes a reminder... I meant that seriously, btw) Thank you so much. God bless.

M: Despite the objections from some in Israel about the national sounding of a siren to recall Israel's fallen, it is the only way to ensure everyone hears and remembers (even if they dont want to). What do you think of America adopting such a custom?

Phyllis: The issue is that since America is such a huge country, many people have no personal connection to the US military. Many people don't know anyone who was ever killed, let alone wounded or even enlisted. Is memorial day taught in the school system?

anonymous from Seattle; glad to hear awareness is on the rise...

TikunOlam; Glad I could help do a good post for the day :-)

Orli a: You can still do another post. You can never remember too much on Mememorial day.

Leora: Is the topic mentioned in schools around the Highland Park area? Are kids educated about it in school?

Sadly, today, rich Americans prefer to park 3 or 4 Hummers or other 16 wheelers in front of their McMansions. Then send the children of poor Americans to die in Iraq, to protect the petroleum suppliers. If you look at the lists of the boys and girls who died in Iraq, their hometowns and home states reveal a very sad fact: The children of the elite are not on those lists.

This winter I was in NY and Chicago, meeting with wealthy Jews and art collectors. When I spoke about the "Boys in Iraq," they really couldn't have given a damn. At least not on a real person to person level: They simply never met any. No sense of gratitude or indebtedness.

Then I spoke to a judge, a person whose job is to defend the US democracy. "They chose to go there...who forced them? and they are just lazy people with no initative... they could have come to NY to get jobs to put them through college... they were stupid enough to volunteer..."

But he uses only biodegradable paper bags