Eyewitness Account of a Shabbat in Hevron's "Beit HaShalom" 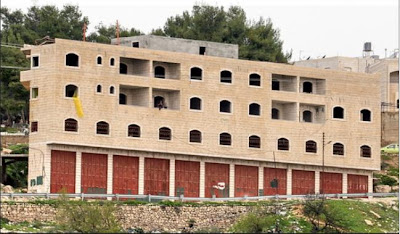 The following email was received from a friend about his personal experience this past Shabbat, at the "Beit HaShalom" -- the "home of peace" in Hevron which Ehud Barak and Tzippi Livni are doing their best -- to evict all the Jews from this legally purchased home.

This eyewitness account is a scary example of what's really going on in Hevron, and why its important for people not to rely only on the avowedly anti-settler MSM websites.

My family and I were fortunate to spend Shabbat Toldot in Bet Hashalom. While trying to take my Shabbat nap (always a challenge in the sleep challenged ibn-Ibrihim family), I was woken up to the sound of shooting. No just one or two bullets, but repeated shooting. Making sure that the ibn-Ibrihim's who were in the room (we later found out that two were in Kiryat Arba visiting a friend, and so, missed a lot of the "fun"), away from the windows, I went out of the apartment we were staying in, in order to see what was happening, and to see who was shooting at who, and in which direction.

While I am sure that you know the geography of Hebron, Bet HaShalom, and Kiryat Arba, for the benefit of your readers, allow me to explain. Bet Hashalom is at the top of a hill going into Hebron. It overlooks a wadi (a valley). On the other side of the wadi is Yeshivat Nir and Kiryat Arba. In the Wadi are houses occupied by Arabs.

When I went out to the balcony outside our apartment, the wadi was filled with Jewish youths, Israel Border Police, regular police, and soldiers. The police and soldiers were chasing the Jewish youths and shooting in the air. At some point a group of Arabs became involved too. That was my first impression.

The next thing I noticed is that wherever the Arabs were, there were video camera men there, no doubt from Pallywood. You can be sure that the lenses of those cameras were very selective about what they were shooting.

Since I didn't know where the missing ibn-Ibrihims were, I went down to the street level (overlooking the wadi), and started asking. While I was there, I noticed an Arab teenager on the roof of his house throwing stones down on -- well, I couldn't see who, because the house was in the way, but I'd bet that whoever was receiving the stones had did not have names like Jameel and Ibrihim, but more like Gamliel and Avraham, but that is just a guess…

At any rate, I grabbed a soldier who was next to me, and pointed him at our young peace partner (the one throwing stones). The soldier said to me, "Yes, I see him too." That was the end of that story. No doubt, had the youth been Jewish, that story might have ended in the Hebron police station. (Then you wonder why people on the right wing of the Israeli political spectrum become extreme in their views?)

Then about 10 border policemen ran by, each one carrying 4 billy-clubs (I guess they were afraid that some would break).

After that I began to find out what had happened. It seems that Ateret Levinger, the wife of Malachi, the recently elected mayor of Kiryat Arba, was crossing the wadi. 2 Border policemen stopped her and told her that she was not allowed to cross through the wadi. Since that wadi is used all the time by people going back and forth between Kiryat Arba and Hebron, she had the temerity to ask why. One of the policemen grabbed her, and began pushing her. When she tried to get away from them, one of the policemen gave chase, and pushed her to the ground. He kicked her, and when she stood up , he cocked his gun and pointed it at her.

Since R. Uzi Sharbouf shlit"a (Ateret Levinger's brother in law) saw all of this from his window, he let the youth at Bet Hashalom know what was happening, and they ran to try to save her from the Policeman. When the Arabs from the house under Yeshivat Nir saw a policeman attacking Mrs. Levinger, they came out, followed by 10s of cameramen, and began stoning the Jews.

As I said, I saw large portions of what I write above -- the rest was told to me by other eye witnesses.

For the record, the policeman who started this, was suspended from duty and confined to base, so even the Army seems to agree with a version of events close to what I reported.
(see link in Hebrew: http://www.inn.co.il/News/News.aspx/182233)

Ibrihim - we might have seen each other. I spent shabbat toldot in Kiryat Arba.Hebron, and spent about an hour and a half in beit Hashalom after davening Shabbat morning... http://lifeinisrael.blogspot.com/2008/11/adventures-in-eretz-yisrael-shabbos-in.html

Rafi -
You wrote there that: "We went upstairs, and she took us into one of the apartments. This one was occupied by a family with 7 kids, and her parents were over for shabbos."

We were on the other end of the same floor. We spent some time with that family, as well as one of the other families on that floor. As I recall, her parents were staying over in the MK's room - he was away fo Shabbat, so he was not honored to meet the ibn Ibrihim family. Maybe next time, inshalla.