12:03 AM Jameel here signing off. Thanks again to the wonderful Muqata staff who has been liveblogging around the clock. We hope to continue early tomorrow morning (or during the night if things get crazy).

This is Jameel @ The Muqata, reporting from somewhere in the hills of Samaria -- wishing safety and security to our IDF soldiers and Israel's civilians.

"When you sleep with a missile, sometimes you may not wake up." (Dan Gillerman, past Israeli Ambassador to the UN)

11:44 PM Tonight, a tourist from Chicago was attacked by an Arab mob in Nazereth -- they mistakenly assumed he was "Jewish". Police rescused the tourist who did not require medical assistance. (source in Hebrew) The police have opened an investigation to locate the attackers.

11:29 PM Released for publication: One of the wounded tonight in a rocket attack in Ashkelon is the brother of Israeli Goverment Minister, Yitzchak Cohen [Shas]. His brother was lightly wounded. (Channel 2 Israel TV)

11:24 PM Over 34 shock victims tonight as a result of the Grad Missile (Katysuha) that hit a Beer Sheva kindergarten tonight. Two Kassam rockets launched at Western Negev -- no injuries or damage.

11:14 PM Jameel here for a bit more -- thanks Litvshe for some awesome reporting today! Many of the Jewish residents from Gaza who were removed by the Israeli Government during the "Disengagement" were relocated to temporary housing in Nitzan (3 years in temporary housing with no solution is another issue).

The problem is their temporary housing is made totally of sheetrock, and there are no shelters or concrete walls in case of the falling rockets from Gaza. 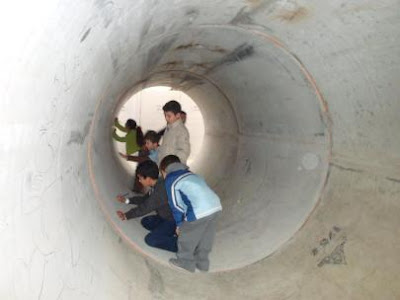 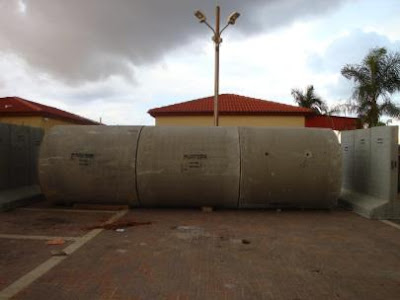 11:00 PM This is Litvshe signing off for the night. I'll be back in the morning.

10:50 PM The cell that launched the rockets at Be'er Sheva has been hit by Air Force fire.


10:32 PM United Hatzolah paramedic seriously wounded in yesterday's terrorist attack in Kiryat Sefer has taken a turn for the worse. (His name is Aryeh ben Varda)

10:28 PM One person lightly wounded by shrapnel in Ashkelon.

9:50 PM President Bush: "There is no point in a ceasefire just for the sake of having a ceasefire".

9:48 PM Unconfirmed reports of an explosion near Yavneh.

9:45 PM Reports of rockets falling in Be'er Sheva and Ashkelon.

9:42 PM Another barrage of rockets on its way. Sirens in Ashkelon and Ofakim.

9:25 PM The rockets that landed in Be'er Sheva were Grad/Katuyshas. One hit an empty kindergarten.

9:20 PM Sorry about the lack of posting, but Bezek in their infinite wisdom have mucked up my DSL line. (Litvshe)

IDF: "We are waiting for the order for the ground offensive to take over Gaza!" (source in Hebrew) 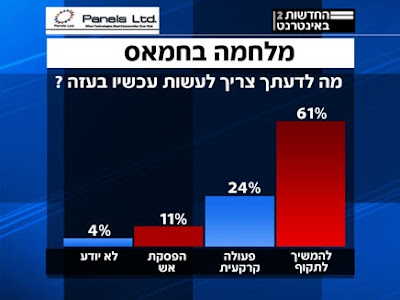 This was apparently too much for YouTube, which moments ago removed several videos from the IDF’s channel, including the most-watched video, which showed a group of Hamas goons being blown up in an air strike as they loaded Katyusha missiles onto a truck. The point of such footage, as if it needed to be said, is not to revel in violence — it is to show the legitimacy of Israeli self-defense.

I hope she stays safe...an outburst like that usually ends up with "honor killings"...

6:52 PM Despite many Israeli media outlets (YNET, Haaretz newsflash at 5:11, NRG, and others) announcing that the IDF is recommending a 48 hour cease fire, the IDF Spokesman has firmly come out against the stories:

"The IDF Spokesman's Unit denied Tuesday's media reports suggesting the defense establishment recommended the National Security Cabinet explore a ceasefire in Gaza. "These statements are untrue and were not corroborated prior to their publication," said the military."

This goes hand in hand with the report below that the IDF is chastising Israel's media for attempting to dictate IDF military action.

6:43 PM Massive air strike on the Philadelphia strip at this moment.

6:35 PM YNET reports that Hamas has rejects a 48 hour cease-fire proposal by Israel. Hamas: "We will hold fire only when it suits us"

6:20 PM Reports that the Gazan rocket which landed today north of Beer Sheva has a 60 kilometer maximum range. This could add a whole new dimension to the war...


6:00 PM There will be a short break in coverage as we move to our next undisclosedsed location.

4:26 PM A female soldier was attacked near the Huwara junction by Schem. No injuries reported.

4:17 PM Rocket lands in the "Big" mall in Kastina near Kiryat Malachi, reports of injuries.

4:08 PM The range of various rockets and what they can hit. 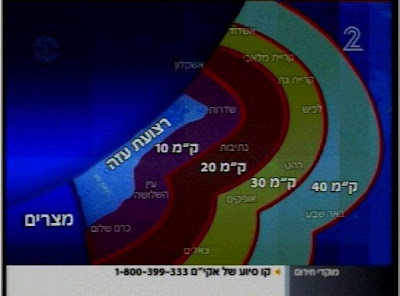 3:17 PM Army radio reports that it seems the Air Force is out of targets to hit.

3:15 PM Sirens in S'derot, explosions reported. More information as it comes in. Update: House of Chabad representative hit, he and family are currently in Kfar Chabad.

2:36 PM Motorist injured from rock attack near the Yitzhar settlement.

2:20 PM Rocket lands in the Western Negev. No injuries. 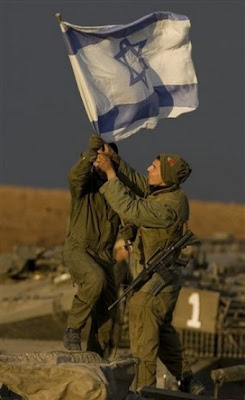 An IDF soldier in prayer (Reuters)

Taking Cover from a Gazan Rocket in Ashkelon (TSAFRIR ABAYOV) 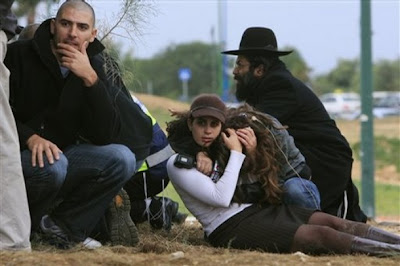 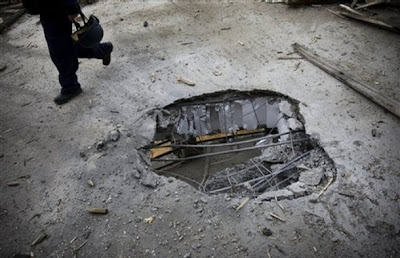 1:58 PM Protesting the war on Gaza (not sure against who though) 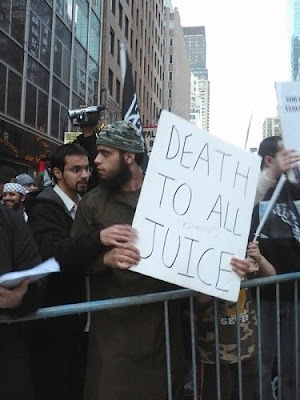 1:36 PM Critically wounded Palestinians from Gaza being transported to Egypt for treatment.

12:52 PM From one mission to the next. F-16 pilots returning from missions over Gaza, instead of taking time off are spending their time in S'derot and Netivot distributing toys to children in bunkers.

12:46 PM Czech FM has also set the blame directly on the shoulders of Hamas, claiming that their firing of rockets is unacceptable. The Czech republic takes over as President of the EU on Thursday.

12:42 PM Tanks have been used for the first time in the conflict, opening fire on targets in the strip.

12:12 PM 1 lightly wounded, 2 suffering shock from 3 rockets in S'derot. One of the rockets hit the house of a firefighter who was out on call. His pet dog was wounded seriously.

12:11 PM Hamas denies any contact with Senegal about a cease fires.

12:03 PM Israel spreading pamphlets to residents of Rafiach in Gaza to leave their houses.

11:28 AM General Naveh of the IDF has stated the three ways that the situation can continue:
1. Cease fire - Hamas forced to request a cease fire.
2. Continuation of airborne attacks - Though there is a lack of targets.
3. Airborne and Ground based attacks continuing to bring the fight to Hamas
He is recommending the third option even though it will end in more casualties. The goals are to return to a cease fire, return to negotiations and the return of Gilad Shalit.

11:09 AM Corrections services vehicle stoned on the 443 road near the Ofer Prison.

11:04 AM The funeral of Irit Shitrit will take place at 2:00 PM in the Ashdod Cemetery. Staff-Sgt. Lutfi Nasraldin will be buried at 3:00 PM in the Usafiah military cemetery.

10:58 AM Some shots from of rocket hit sites in Ofakim. (source rotter.net) 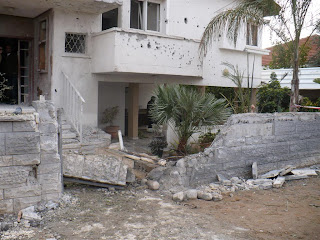 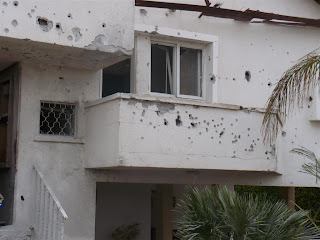 10:33 AM A number of explosions heard in Gaza, reports of a car hit. Reports of 1 killed and two wounded.

10:20 AM Israel moving 100 trucks of humanitarian aid into Gaza. 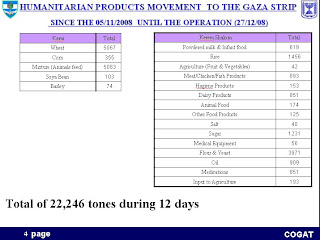 9:53 AM Turkey and Egypt warn Israel that a ground war might well induce Hizbullah into joining the war. (source Ynet Hebrew)

9:32 AM Boats trying to deliver aid to Gaza have been turned back by Israeli Naval forces.

9:20 AM 107 Arab rioters arrested so far since the beginning of the Cast Lead operation. 94 are still in custody.

9:15 AM Thanks to JoeSettler and others who have kept this up while Jameel and Litvshe have been offline. And thanks to Bezek for choosing the opportune time to muck up my aDSL connection at home. (Litvshe)

9:00 AM Schools within 30 Kilometers of Gaza border have been ordered closed today (their has been no school this past week for the Chanukah holiday).

8:30 AM The Consulate General of Israel in York will be holding an online press conference today on Tuesday on Twitter, at http://www.twitter.com/IsraelConsulate between 1 p.m. and 3 p.m. New York time.

IDF overrode the signal on Hamas radio this morning and warned all Gaza residents to stay away from ammunition bunkers as they will be blown up today.

Terrorist shoot at Border Policeman in Jerusalem. No injuries reported.

Stone throwing on 443 near Atarot. IDF dispersed the throwers. I was just there, but didn't see any signs of violence, though there were a lot of stones on the highway Monday morning.

Carmella Menashe of Israel Radio is reporting that IDF ground troops have begun entering Gaza at around midnight. No secondary sources are confirming/reporting this. Second time that this report has gone out in the past 6 hours.

Terrorist attack in Kedumim. Israeli man stabbed in the head by Palestinian.

Molotov cocktail was hurled at the back entrance of the Hadassah Mount Scopus Hospital in Jerusalem.

Jerusalem Municipality offering major discounts to Southern residents on shows and hotels for those visiting the capital.

I drove past Atarot last night (~8:30) on 443. There were some rocks on the road. I had the surreal experience of driving on a major highway, casually listening to Simon and Garfunkel while watching a group of soldiers climbing on the walls on the side of the road just a few feet away, firing some sort of grenades over the top of the wall (presumably tear gas or stun grenades).

Here's the link to the Chanuka Menorah made from rocket shells-

Why is that when Barak's in charge the terrorists get active? Do you remember when he was prime minister?

To balance my cynicism, a friend is posting Notes from Netivot.

It is critical to look at the photo of the house with the rocket exploded outside it. You can see how the shrapnel hits start at about 10-12 feet above the ground -- this is important. The rocket explodes UP, and out. NOT side to side parallel to the ground. Therefore, if you can't get inside or into a mamad, you are safest lying down FLAT on the ground next to a building or wall.

Thanks to Jameel for this tip.

Notice that the fellow who wants to kill defenseless juice has scratched in '(zionist)' above the word 'juice'.

Does that mean he won't drink OJ made from Jaffa oranges?

Good to laugh a little...

posted the same pic that you have on your 1:58pm update on my blog. i thought i had better tell my liberal left readers that the dude was protesting the Israeli airstrikes and not the OJ trial.
P.S., great blog!

Thanks for all the updates. Do you think that this 48 hour truce idea is true??

Gavriel: Yes, I think the government is seriously considering it. Do I think it's a good idea? No.

Stormin: Thanks :) [though I'm sure that demonstrator has made a ton of enemies at the Israel Citrus Growers Association.]

I would have said that guy hates O.J. Must not have read about his going to jail.

I don't love juice either, but I don't think it deserves death. Sheesh.

That's a mean-looking guy anyway. Probably thinks alot of things should be dead.

I love that quote from Bush about cease fires. Perhaps one of the most intelligent things he's ever said.

Awesome blog. Here in the US, the only way I have of getting news that isn't biased against Israel is the Internet, and JPost and Arutz 7 just don't update fast enough. Thanks a ton!

I think the guy would just rather drink pop.
Thanks for the updates.

Moral to Hamass: Playng war can be a deadly game.

Don't like your politics (as you probably know from DB), but this is a real service and I have been glued to it for days.

So, thank you. Please God this operation will conclude with safety for the citizens of Israel and the soldiers who put their lives on the line to defend them.