Will Injustice be served on Shabbat? 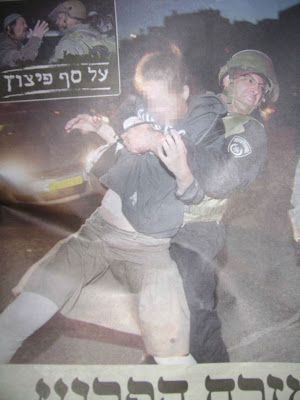 (picture added by Jameel...from today's Yediot Achronot, page 3)
Olmert began his term with "Convergence". He would expel Jews left and right from Judea and Samaria and "converge" them all elsewhere, today he said he would dump us all in the Negev.

But Olmert's convergence isn't what is really going on these days.

The Labor party is all but dead and his real plan is to pull a Meimad. All Barak touches he destroys with his ego and incompetence. You can get away with that unseen in the army, but in politics you can also get away with it, but everyone sees it.

He probably plans to merge Labor into Kadima.

Because he wants to continue to be Defense Minister, a position he has proven to be worse at than Amir Peretz.

The merging of Labor into Kadima is the first convergence.

The second convergence is the merging of Kadima/Labor into the Likud.

Netanyahu seems to be saying that he wants a National Unity Government. That only means he brings Kadima into his government (he's already bringing back some of their members to his list).

So you vote Likud, and we're back again with the same losers we just tried to kick out.

The point is that certain elements in the army and police have been trying to find a way out of expelling the owners and residents of the Peace House. But Barak has made it clear that that won't be happening, and if he has his way, injustice will be served.

Barak can't win against Hamas, Iran, Fatah or Hizbollah, so he must have at least one victory before elections to prove he is qualified to be Defense Minister, and if the only enemy he can fight and perhaps win against are Jewish teenagers in a house - so be it. A medal is a medal, and in the army no one else actually knows what your missions actually were to get you all those decorations on your chest.

To him the lessons must be clear.

If they are going to have any chance at this expulsion and him remaining Defense Minister he must do it in a way where the rest of the country (particularly the settlers) won't be getting in the way.

He will probably choose to publicly desecrate the Shabbat (alongside desecrating Truth and Justice) and have the expulsion when supporters from all over the country won't be able to hear of and arrive to fight his evil act.

We really need a true electoral reform to get rid of all these players that need to be once and for all kicked out of politics.

Current reports is that the Settlers and Army/Police are negotiating.

The current terms are that all the guests will leave the Peace House and the residents can stay.

Based on the decision of a court that deals specifically with property issues, the residents will accept the decision of the relevant court (as the Supreme Court is not relevant) and either stay or leave.

Will Barak uphold his end of the deal, or will he do what he did in Beit Shapiro?