Possesion is 9/10ths of the law...unless you are a Jew in Hevron

(scroll down for updates)

Despite calls for mediation, despite having been in the house for almost a year, despite hills of evidence of ownership and sale, Defense Minister Ehud Barak is trying to boost the Labor Party's standing, and has ordered a particularly violent, forced evacuation of the Peace House in Hevron. (3:01 PM)

Initial reports speak of large quantities of tear gas being used against the Jewish residents of the building, and the Police are preventing medial personnel from arriving at the scene. 4 MDA ambulances are being held up from from arriving.

Shock grenades are being used now as well.

More reports as they become available.

3:06 PM Reports of over 14 wounded by Black-uniformed YASAM policemen; their mission code name is "The Italian Job".

3:08 PM Channel 2 reports that a Jewish resident of the house was seriously wounded in his head by a policeman's bat. 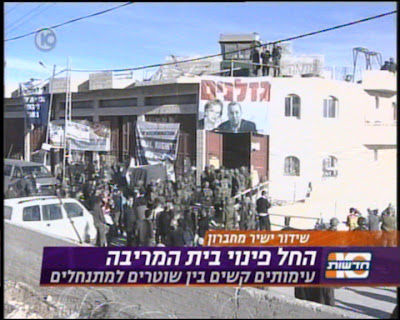 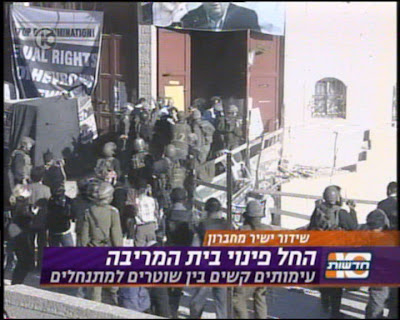 3:13 PM Channel 2 reports over 30 shock, smoke and tear gas grenades were used against the Jews in Hevron. Reports of over 50 Ambulances on standby. A girl being administered oxygen and emergency breathing support can be seen on Channel 10.

Channel 2 reports that the "operation" is almost complete.

Ehud Barak chose the day of the Labor's Primaries to ensure Jews should not legally own property in Hevron.

The fires in hell are being stoked now for when he arrives at age 120.

5:30 Reliable Reports from inside Hevron report that there are hospitalized infants from tear-gas inhalation....and that the numbers being broadcast of less than 10 wounded overall, are simply media spin.

When I heard the news at 3pm I was nearly in tears. I don't think I could vote far enough to the right to satisfy my desire to see every ounce of the Left (Kadima + Labor and possibliy whats left of Likud) destroyed.

Why is the left so intent on destroying us???

The house never would have been a problem if only the buyer had given Olmert the envelopes he asked for.

I am in tears- so sad to hear this reported....

Did you get my email?

It will just get more violent..you cant win in chevron.. we own dozens of buildings.. kick us out of this and we'll take another..

this is all very depressing

"The fires in hell are being stoked now for when he arrives at age 120."

why do you wish longevity on him?

Loz: Because if I don't with him longevity, the Shabak will be knocking down my door for incitement.

Miram: Havent checked email in a bit. Will try motzash.

What drives me crazy are comments like "democracy won today" ..."we have enforced the authority of the government over the people." Don't Barak and Olmert realize that those two statements contradict each other?

The MSM is reporting that there were potatoes with nails stored in the house, and after the expulsion, Jews rioted in Hevron, burning Arab houses.

Is that true? What truly happened there?

Soon:
You should read my post "Let's Talk Totalitarian". That's exactly the point.

The language the Left uses is about forcing the authority of the State onto the citizens, "controlling" the citizens, and the citizens following the will of the government.


Is that statement about the potato believable?

I wouldn't rule out some bored kid sticking a few nails into a potato or two (or more). But consider this, in Gush Katif, in Amona, and now in Hebron they accused us Settlers of throwing acid into the eyes of the Police - which yet again proved to be a bold-faced lie on the part of the police and government in their attempts to malign us.

A lot of what was reported in the MSM wasn't accurate. They didn't discuss how the events a few nights ago began with the Arabs pelting the Jews with stones and not the other way around.

Definition - Pogrom: An organized, often officially encouraged massacre or persecution of a minority group, especially one conducted against Jews.

That would better describe what the government did the rightful owners and residents of the peace house.