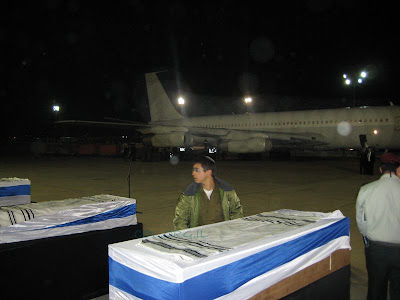 The bodies of the murdered Jews in Mumbai arrived home in Israel last night at 11:00 PM. The funerals are scheduled for different times today -- the funeral for Rabbi Gavriel and Rivka Holtzberg is scheduled to start at 1:00 PM in Kfar Chabad.

There has been much noise that the coffins were draped with Israeli flags due to a request from one of the families, and they insisted a tallit be placed on the coffin instead.

The coffins were all draped with flags and tallitot.

The family of slain Hasid Aryeh Leib Teitelbaum has informed the government that it would like the State not to intervene with his funeral.

According to a family member, "Holding a Zionist funeral for Teitelbaum, who was a Satmar Hasid, would desecrate the dead man's honor." The family demanded not to have a government representative at the funeral and that the casket, which will be flown into Israel today, would not be covered with the Israeli flag.

They also asked that Teitelbaum's body would be released immediately upon the plane's arrival, so that they would be able to hold an intimate funeral for him as soon as possible.

Shmuel Pfenheim of the Haredi Community anti-Zionist stream told Ynet: "I'm sending a message from the family. We don't want the State to meddle in our grief. Suddenly Israel has an interest to show the world that it is also a victim of global jihad, so it decides to throw a big ceremony with a coffin wrapped in a flag. We object to this. It pains us and offends our values."

Pfenheim, who attended the same yeshiva as Teitelbaum, added: "He wasn't killed as an envoy of the State or as a Zionist person. He simply went there as a kashrut supervisor on behalf of an American kashrut system. He himself was an American citizen, and although he was a resident in Israel he wasn't an Israeli national.

"The mere fact that he was living here, in a closed congregation, doesn't give the country permission to exploit his death."

Despite their protest, sources in the Haredi Community stressed that they did not plan to create havoc over the matter. "We are not like Neturei Karta. We conduct our struggles peacefully, and are simply begging the minister in charge and the police – the man has suffered enough. He's been there for almost a week. Let us bury him according to the family's will." (YNET)

While people may criticize Teitelbaum's family, they did raise $125,000 to fly his body back to Israel privately without waiting for the IAF plane, yet Israel forcibly insisted that all the bodies be flown back together, with flags and a State sponsored funeral. In his lifetime, Aryeh Leib Teitelbaum led his life according to strict Satmar ideals, and did not accept bituach leumi or government aid -- and he worked in India to support his family.

The bottom line is, "sources in the Haredi Community stressed that they did not plan to create havoc over the matter."

It is a sad situation.

"they did raise $125,000 to fly his body back to Israel privately without waiting for the IAF plane, yet Israel forcibly insisted that all the bodies be flown back together . . ."

this is not mentioned in the ynet article you linked to?

i don't understand how israel could force the body on the plane. he was an american citizen. why couldn't the family instruct the indians on their own (or through american diplomatic channels) what to do with the body?

and yes, while the israeli government can be underhanded and a bully, this in india, where it has no jurisdiction

Once they are willing to pay the costs of transportation, they should be able to decide on their own how to treat the body.

Am I missing something here? If a group of Australians and a Fiji citizen were killed and evacuated by the Australian air force, would the Australian government force the Fijian to have and Australian flag on his coffin, just because he lived in Australia?

It's time for Satmar to recognize the state of Israel and stop being so stubborn.

Anonymous: I don't think its an issue of being stubborn, but a difficulty of dealing with an entity that forces its worldview on its Jewish citizens.

Its convenient if you agree with it, but when you don't...they can be rather nasty.

(See current peace house as an example, or the cutting off of peyot from Yemenite Jews in the 1950s)

are they raising money for the orphans or to defeat the evil zionist entity?