Monday's News can be found here

9:26 PM Gaza rockets fall in a Kibbutz, east of Gaza. Damage to cow barn, no injuries. Note: As opposed to when I previously blogged about the Second Lebanon War, I will not be giving specific locations of where rockets land (unless there are serious injuries and the military censor has already permitted it). During the last war, Israeli Arabs used "google earth" to pinpoint Katyusha strikes in Israel to help Hizbolla calibrate their targeting. We will not help the Palestinians (though why they still have internet access, VIA ISRAEL is a mystery to me).

And now...I'm going to try and go to sleep, and will only post very urgent items till early morning. I'm on a Magen David Ambulance shift tonight (EMT, and driver), so I need to try and get some sleep. See you in the AM. Translated from INN. 9 year old "Shir" wrote a list for herself in case of rocket attacks on her home in Southern Israel. This way she knows how long it takes to run to the bomb shelter from everywhere in her home, from the time she hears the air raid siren.


4:00 PM All sorts of things going on. Rockets just landed in the Eshkol region (east of Gaza). No reports of injuries. Over 150 Arabs rioting at the Kalandia Checkpoint in NorthEast Jerusalem. The Naharia (northern Israel) Hospital just opened its underground command center and emergency bunker provisions. MDA has brought it's Ambulance-MediVac Helicopter to Kiryat Gat (Southern Israel) to help deal with the ongoing rocket attacks. Rock Attack in the Galil -- Northern Israel against Israeli Jewish motorists by Israeli Arabs (outside the village of Dir Al-Assad) on Raod 85. No injuries -- there are reports of damage to cars.

3:59 PM Jameel's back. Just had to deal with a car accident outside our settlement. Car flipped over -- all occupants walked out. Simply a mind-boggling miracle.

3:38 PM I'm not sure about the text, but some graphic pictures of what's happening on the ground in Gaza. (Litvshe) 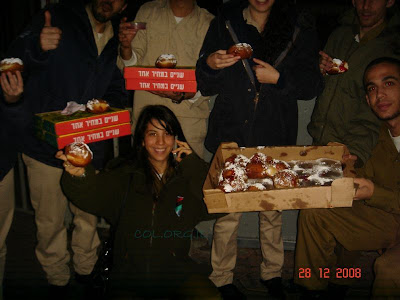 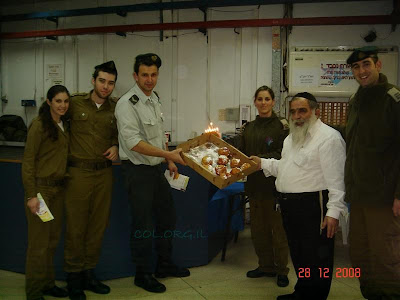 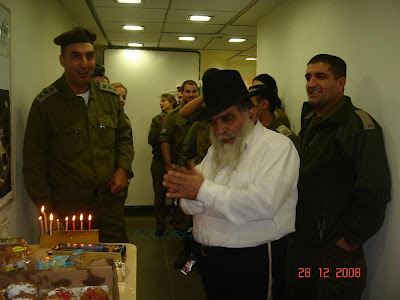 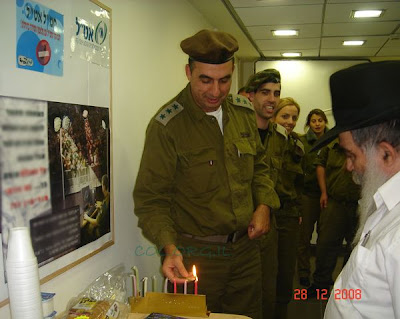 2:32 PM Israeli Government Approves call up of 6,700 reservists. (Jameel notes, I wonder if that will include me...how will I keep liveblogging?!)

The reservists will be called up ahead of the possibility of expanding the military operation in the Gaza Strip, subject to the approval of the Knesset's Foreign Affairs and Defense Committee. A national economy emergency system was not operated during the Second Lebanon War.

2:28 PM Hamas declares victory over Israel in an official leaflet -- overcoming the IDF blockade on Gaza. The "proof" of their victory is that they hit Ashdod with 2 "GRAD" missiles. 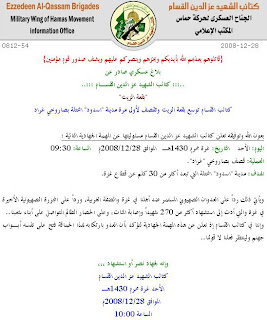 2:20 PM Walla News reports that over 30 Fatah terrorists were killed this morning by an IAF raid in Gaza (the jail they were in was hit by an IAF bomb). Additionally, the Gush Etzion - Hevron road is temporarily closed because of rock throwing.

2:15 PM Israel Radio (Reshet Bet/Channel B) Reports of a young (Jewish) infant who was lightly to moderately wounded by rock throwing Palestinians at Tzomet Zif near Hebron. The infant was wounded when rocks crashed through the car's windows. Additional rock throwing has been reported in Beit Omar (also in the Hevron district).

2:13 PM Air Raid Sirens and "Color Red" warning system acitvated to the East of Gaza strip in the Eshkol region. Reports of one Qassam landed with no damage or injury.

2:11 PM Israel National News reports that Ashkelon's Barzilai hospital has evacuated the top (5th) floor out of concern for additional rocket attacks. The "Elder of Zion blog is keeping good track of all the incoming rockets -- see his December Rocket Calendar, here.

12:34 PM No wounded in the past 5 minute rocket attack on Ashkelon.

11:21 PM (Off topic from the war) Last year, I managed to get to Kever Yosef (Joseph's Tomb) in the city of Shechem (Nabulus), and I posted a video of the night time event (including live gunfire). A few days ago, more people rededicated the tomb and cleaned it up. Pictures here

11:12 AM IAF continues to pound Gaza terror targets. Reports of Hamas casualties in Rafiah (Southern Gaza). Reports from Israelies that IAF aircraft are partoling Israel's Northern border to send a clear message to Hizbollah, not to attack.

Video from earlier this morning in Gaza:

...or see the picture here: 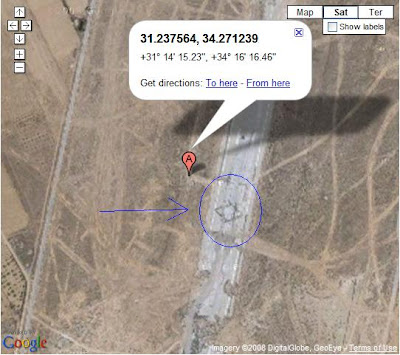 10:53 AM Hamas announces via Jihad Radio: We will soon hit the Zionist enemy with a new type of rocket that they are not expecting. (sourced by Islamic Jihad Radio, via rotter.net).

10:48 AM Fellow Blogger Aussie Dave is also Liveblogging the war. Check him out here. YNET reports that Two additional Qassam rockets have landed in open areas in the Eshkol Regional Council.

Eleven rockets have been launched from the Gaza Strip since Sunday morning. No injuries were reported, but several buildings sustained damage.

10:42 AM Earlier this morning, rockets landing East of Ashdod, over 40 kilometers from Gaza. Sirens have been heard this morning in Yavneh. (YNET)

Blueye reports that Gaza residents are receiving "telemarkteting" style phone messages from the IDF advising them that an attack is imminent.

8:24 AM Over 60 factories and 500 small businesses will be closed today due to security considerations in Israel's Gaza enevelope area. School is not in session due to the Chanuka vacation. 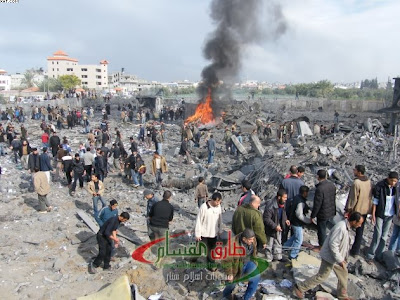 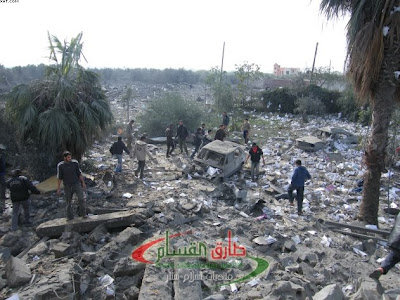 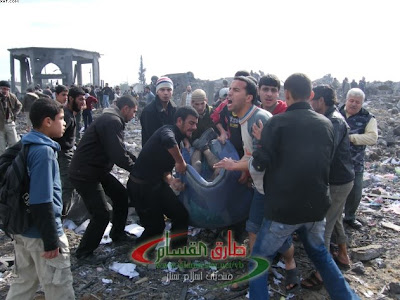 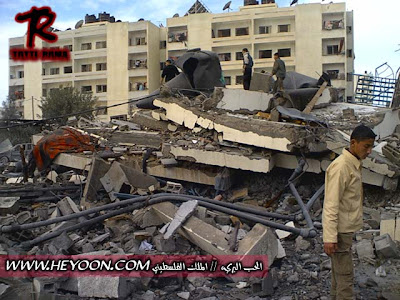 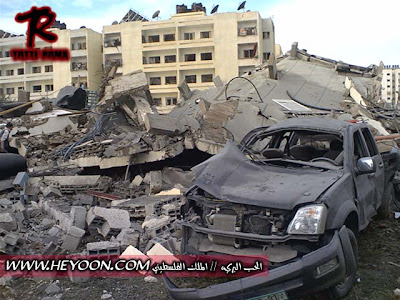 12:39 AM As Israel's southern communities continue to get hit by rockets, the IDF is moving tanks and ground forces into position for the upcoming (probably) ground assault into Gaza. This evening, the Homefront Command (Pikud Ha'Oref) announced the reccomendations for tomorrow. People within 20-30 kilomters of Gaza, including Ahsdod, Kiryat Gat, Rahat, Gedera, Yad Binyamin, etc. should be in areas where they can get to a bomb shelter within 45 seconds of hearing an air-raid siren. 10-20 Kilometers of Gaza (Netivot) within 30 seconds. 0-10 kilomters (Sederot, Ashkelon) within 15 seconds.

So far, over 228 Palestinians killed in Gaza, most of them were wearing Hamas uniforms. Over 750 wounded.

One Israeli has been killed in Netivot by a Qassam rocket, 10 wounded, 1 seriously.


"The IDF has also begun mobilizing tanks and reinforcement infantry troops to the Gaza region in the event a ground incursion is ordered. In an interview with the British SKY network, Defense Minister Ehud Barak said that ground forces would indeed enter the Strip if the move was deemed necessary by Jerusalem. " (YNET)

Israel's Leftwing made sure to get their message out as well:


Around 300 activists took part in the protest, in order to condemn what they
called Israel's "genocide and war crimes". The demonstrators
marched through the streets of Tel Aviv until they reached the ministry's
headquarters.


Many cried slogans such as "No to war – yes to peace", and carried signs saying
"Israel's government is committing war crimes", "Negotiation instead of
slaughter", and "Lift the siege from Gaza". (YNET) 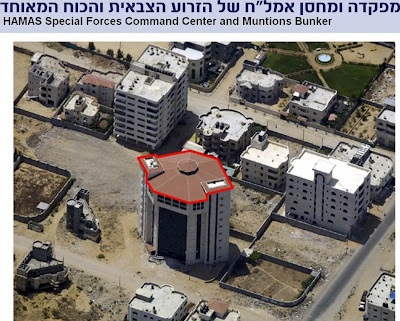 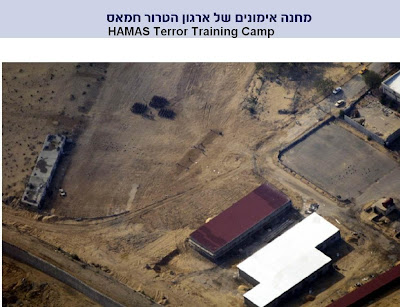 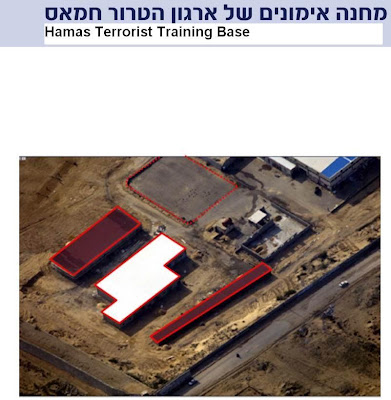 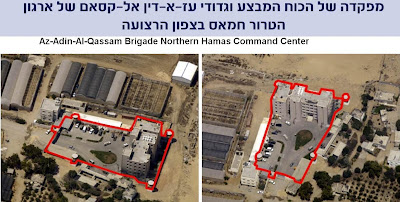 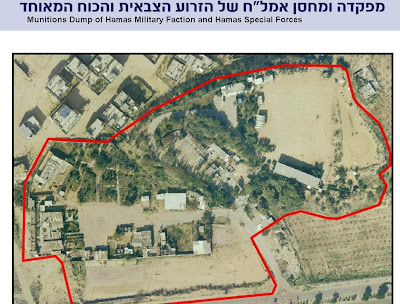 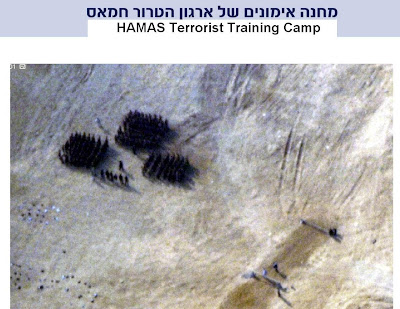 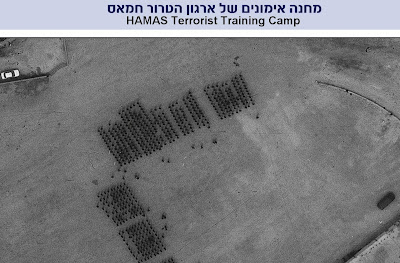 Translations by Muqata. Sourced from rotter.net in Hebrew, here.

thank you! nishma besorot tovot. We should hear good news.

In the video, you can see that after the weapons storehouse is hit, a rocket gets ignited and goes off from the site and crashes nearby.

Any word yet on the definition of "success" for the operation? All I'm hearing is vague foolishness like "reducing their capacity to launch rockets."

>Israel's Leftwing made sure to get their message out as well:

as long as criminaly insane traitorous gangster Olmert is PM nothing will change,
this traitorous swine is an enemy colaborator working with israel's enemies to hasten its destruction/
IDF if you want to make sure you will win this war in gaza,you must first get rid of this traitorous human garbage
chaim

I really hope they use ground troops and avoid the mistakes of Lebanon.

I have reassessed the situation and the bad news is that it is worse than most of us thought...
You can read more here

There is one real winner in this pre-election (campaign) war.

JS: The problem with ground troops (and wars run by Kadima in general) is the kac of attainable objectives.

What is the point of this war?

Chaim Ramon has been ranting for months that the point of a war is to unseat Hamas and reinstate Fatah. That's an objective? So Fatah can shoot rockets at us instead of Hamas? Wonderful.

Additionally, Olmert stated last night, that our "war is not with the Palestinians, only with Hamas".
Lovely - so when over 80% of Gazans VOTED for Hamas in their elections, so Hamas aren't really the elected representative leadership of Gaza?

Ground troops going in a with warped mentality that we have to fight with one arm behind our back is suicide for many of our troops.

If ground troops go in, they need to go in to win the war, not worry about hyper surgical strikes.

War isnt pretty -- Israel's leadership needs to value its citizens and soldiers more than the enemy.

Thanks for the updates.
And- I thought the point of it was now that the 'ceasefire' is over- to actually go out there and protect the citizens of Israel who were getting shot at day and night?
Maybe I'm just unknowledgable about the political situation.

Oh- and I linked to you- thank you!
site

Thank you Jameel for these amazing updates!

Maybe you can tell me why the north is SWARMING with police? We just drove from Yerushalayim area to the Galil and there were mobs and mobs of police everywhere. I'm afraid to go outside until I hear what's going on.

But will this Leftist/Hellenist regime use the same level of force against Arab traitors currently residing in Israel as used against loyal Jewish nationalist Jews in Yesha?

I put together a round up of posts about the situation in Gaza. This post is linked there.

Northern Israeli: The North is swarming with police because of Israeli Arab rock and molotov cocktail attacks against Jews.

No ground troops needed-just carpet bomb the entire area. DO NOT endanger Israeli troops; just send them in for clean-up after.
(The older I get, the more radical I become.)