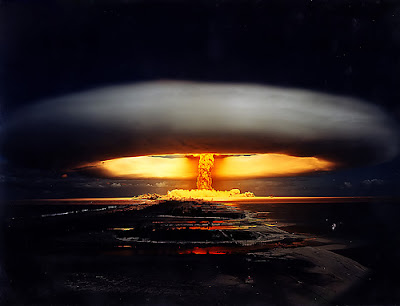 Two black targets appear on the computer monitors in the operator's cubicle.

The warning siren in the Israeli Air Force base wails -- no one can mistake it. Within seconds, the operators are at their stations, communication headsets in place, as the cubicle officer's directives and information are disseminated. The complex radar and missile tracking system spews data at a frightening pace. Direction and height leave no room for doubt as to the target of the two "Shahab-3" Iranian ballistic missiles: within 10 minutes, they will enter Israel's airspace.

The battery commander computes the remaining time till impact.

In the "Bor", the Pit -- Israel 's military underground command post located deep beneath the Defense Ministry complex in Tel Aviv, people chew on their fingernails. Everyone knows that if one of those missiles would hit Israel, the State of Israel will never be the same as it once was.

Israel's media erupts in a frenzy with breaking news stories as residents run for cover to bomb shelters, while some crazies go to the rooftops and wait to get a glimpse of the end-of-the-world mushroom cloud. All of Israel's "Arrow Missile interceptors" are simultaneously launched.

In all the exercises over the past few years, the Arrow has successfully destroyed the oncoming missile, yet no one knows if this will really happen in real-life... (Makor Rishon, The Day of the Bomb, 12.12.08, translation, The Muqata)

The above scenario was written by Yoaz Hendel, a reporter for the Makor Rishon newspaper, as the preface to an article describing Israel's Defense establishment's preparations for a nuclear Iran.

"The one responsible for providing solutions to Iranian ballstic missiles is Israel's Air Force, and within them, the anti-aircraft [J@TM: which includes anti-missile] and satellite division. Within the IDF satellite command center, soldiers and young officers carefully scan large plasma screens -- for every object that rises to a particular height and a specific speed.

This information the relayed through closed circuit communications to the Kiriya's "Bor", to the human minds that control the Arrow anti-ballistic missile system."

I found this article rather sobering, in light of the book I'm currently reading; Former IDF Chief of Staff, Moshe Ya'alon's "The Longer Shorter Road" [Hebrew]. While he focuses much of his book on the Israeli-Palestinian conflict, Iran is a major part of the book.

Excerpted from Caroline Glick's review of the book:

Last week Ya’alon published a book called The Longer Shorter Road in Hebrew. Ya’alon, whose tour of duty as Chief of Staff was unceremoniously cut short by former prime minister Ariel Sharon in June 2005 due to his trenchant opposition to Sharon’s planned withdrawal of IDF forces and Israeli civilians from the Gaza Strip, has written a book that sets out the facts of life clearly, credibly and passionately.

The book’s title is derived from a speech that Ya’alon’s commander, Yoram Ya’ir, gave to his officers during the First Lebanon War. Ya’ir explained that short-cuts are not necessarily better than long roads. In fact, it is often better to take the longest route. As Ya’ir put it, “There is a long road that is short and there are short roads that are long.”

Ya’alon uses Ya’ir’s point to demonstrate that the Israeli Left’s insistence on peace “now” and a solution to the Arab-Israel conflict “now” has placed Israel on a strategic trajectory that has brought it, and will continue to bring it only bloodshed and danger. Israel’s enemies in the Palestinian Authority, Lebanon, Syria and Iran view Israel’s insistence on finding immediate solutions to the threats it faces as a sign that Israeli society is collapsing.

As a consequence, every step that Israel has made toward appeasing its neighbors - from recognizing the PLO and bringing Arafat and his legions into Judea, Samaria and Gaza; to retreating from Lebanon in 2000 and Gaza in 2005; to failing to properly prosecute the Second Lebanon War in 2006; to doing nothing to combat Hamas’s regime in Gaza since 2007; to embracing the false paradigm of peace at Annapolis last November - has strengthened their conviction that Israel can and will be destroyed.

Ya’alon also dwells on the moral collapse of Israel’s political and media elite and that collapse’s adverse impact on the senior command echelons of the IDF. The abandonment of Zionist values and public and private integrity by our politicians and media has cast and kept Israel on a path of self-delusion, where the only thing that matters is immediate gratification. Politicians promise the public “hope” based on illusions of peace-around-the-corner to win their votes. The media support the politicians’ lies both because of the media’s post-Zionist ideological uniformity and due to their refusal to acknowledge that their populist demands for peace “now” have brought Israel only war and danger.

In exposing himself, his values and his beliefs to the public, and juxtaposing his own leadership experience and personal integrity with the corruption and weakness of our political and intellectual leaders, Ya’alon is telling the public in a very clear way that there is an alternative to defeatism and self-delusion, and that he - and we the public - represent that alternative, that “longer shorter road.”

With Palestinian Qassam rockets hitting Israel all weekend in the South, a Nuclear Iran waiting in the wings to the East, and Iran's proxy, Hizbolla arming itself to the North, I wish we had the leadership that could direct us through these turbulent times.

Unfortuantely, I don't see many.

Jameel - As you may recall, a very wise commenter :-) once left the following comment on my blog:
"Hope springs eternal...that's why we're here in the first place."

Jameel - with reference to this post, on this Shabbos, the Rav at the lecture I attended told us something shocking. I'll do my best at repeating it.

"The Israeli artillary mfgs in Israel are building "A BETTER ROCKET" and have the govt in a stranglehold not to finish off the current rocket launchers in Gaza, because then they will not be able to sell their "BETTER ROCKETS"."

At first I typed 'unbelievable', but unfortunately, it is believable, as we have heard such things before.

Not to toot my own horn but I wrote a short piece expressing the possible Iranian nuclear attack on BOTH the US and Israel in 2006.

Barrack is so wonderful he makes us impervious to nuclear attack.....

A description of how the scenario from the Makor Rishon article might play itself out can be found in this sobering article by Benny Morris (the recovering radical leftist and "New Historian").