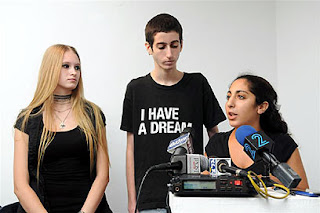 Its not enough that self-proclaimed "Zionist" Judge Goldstone slanders Israel that we [allegedly] committed war crimes in Gaza. Goldstone's slept through the testimony of Sederot citizens who were rocketed around the clock by Gaza for 7 years -- not overly surprising either.

Yet for a group of pseudo intellectual, left wing Tel Aviv highschoolers to bash the IDF and Israel as well -- well, it may be expected, but enough is enough. The 80 brats got lots of media attention by sending around a letter, calling on teens to refuse to serve in the IDF.

The letter concludes by stating, "Our refusal to be soldiers of occupation derives from our fidelity to the values and society that surround us, and is part of our continuing battle for peace and equality, a battle whose Jewish-Arab character proves peace and coexistence are possible." (YNET)

These are the Goldstones of tomorrow.

Luckily, the vast majority of Israel is not comprised of such spineless fools.

Outraged religious teenagers from the Bnei Akiva Youth Movement announced that the leftists who refuse to server may be 80, but we're 80,000.

In under a few hours, a counter letter was written, and has already been signed by 500 teens, with the numbers growing quickly.

"We can't let the voice of one minority change the entire national mood to one big down," says 18-year old Eran Vider. He and his friends have decided to write a letter of opposition calling on teens to enlist and fight the evasion of army service.

"Every year we hear the voices of those calling for the evasion of service with ideological declarations, and this year we have decided not to remain indifferent or silent, to show that this is the opinion of a minority and that we, the youth of today, want to continue in the path of the founders of Israel," the letter says

"Really, we don't understand them," says Vider. "If they can't accept the holding of weapons, why can't they at least perform national service?" (YNET)

Its obvious, but I'll leave that to the leftists who read this blog to provide a "defensible" answer.

Because then nobody would pay any attention to them?

How about we give them what they want? Let the army give them a profile of "0" and let them go their merry way.

If leftists don't want to defend Israel, buy a one way ticket for them to a country of their own choice. Israel does not need enemies within who undermine by word and deed, its very existence.

they are against military service in the territories...whether or not you agree with their stance, as members of your society they have a right to speak out against it.

I'm not familiar with the details of national service...but I thought men can only do it if they have a physical disability, and women if they are religious.

Take away all of Jewish Tradition and educate towards a nebulous, self-defeating liberalism, and you have Israel's public education. Shulamit Aloni once said it best: "We wanted to produce a generation of Epikorsim, but we instead produced a generation of Am-aratzim."

These are the products of a bankrupt pseudo-morality that Israel must move away from. Thank God, 90% of Israelis are not Am-aratzim as these 80 kids are.

YB: As in the totally amazing, stunning success of a peace agreement when we left Gaza?

(Or the following disgraceful treatment of Israelis from Gaza, thrown out of their homes?)

The IDF is about fighting our enemies -- not political shtuyot. The Police exist for that.

chop suey: they are against military service in the territories...whether or not you agree with their stance, as members of your society they have a right to speak out against it.

Apparently, you didn't read Jameel's post, or the article he cited. Refusing to serve in the "territories" is passe -- these students are refusing to serve in the IDF at all, in any capacity whatsoever. And just to make sure there's no room left for doubt, their written statement explicitly says, "in the occupied territories and within the state of Israel".

the reality is that with passage of time , tzahal becomes more and more a dati leumi endeavour, to the exclusion of leftists and haredim....

YB: I presume those members of Bnei Akiva signing the second letter against the evasion of Army service for ideological reasons...

One more thing -- the leftist teens refuse to do sherut leumi as well. Why is that? If someone wants to not serve in the IDF for ideological reasons, is helping social services in the State such an abhorrent thing?

Your three periods are completely unnecessary, as the good boys and girls from bnei akiva proved back in the summer of 2005 that they have no problem ethnically cleansing Jews from the land. Whether or not there is a peace agreement is completely irrelevant. But beware! Beforehand they will organize some very creative and heartwarming protests to let you know how much they're against the said ethnic cleansing.

The kids from Tel Aviv, on the otherhand (or at least a small handful of them) are willing to actually suffer for what they believe in. Some of them will go to kele 6 for a few months. No big deal, but it is still much more than what would have happened to the bnei akiva types if one of them refused to follow orders during the expulsion (21 days max. This from personal experience...)

So even though I'm 100% opposed to what they stand for, I can't really help but respect the kids from Tel Aviv much more than the bnei akiva crowd.

Judean: Do you have the same respect for Richard Goldstone as well?

Why *should* they do National Service? Why should they serve their country, if they don't perceive it as worth serving in it's current guise? They were born into a system they didn't choose, but at this point, they aren't "kids". They are 18, therefore old enough to fight, and also old enough to decide if they believe in what they are supposed to be fighting for. Whether they've been educated that the IDF is a defensive army or an occupying force, this group all have a right to their decision to comply with their government or to sit in prison, leave the country, whatever. As do the BA teens if they choose to serve. Neither group get any extra points for bravery or Zionism or Israeliness, as far as I'm concerned.

It is no secret that that mandatory Army Service underlies all sorts of mechanisms within Israeli society- an unspoken phenomenon which has become increasingly problematic on a myriad of levels. The prospects for Israel without a strong army are terrifying. On the other hand, one can't expect future generations to blindly fall in line with decisions erroneously taken by previous generations in the name of Zionism, which has evolved into an entirely different beast since the founding of the State.

This boils down to a very basic question I have posed many times: Is there any common denominator that binds this country's Jewish population together.

If the far left refuses to do military service to defend the country based on moral objections -- I can understand. To take themselves completely out of the picture, not serve the country in any manner shape or form by refusing to do national service, means they have no common denominator with the country.

If that's the case -- the really correct decision for them is to leave the country.

On the other hand, one can't expect future generations to blindly fall in line with decisions erroneously taken by previous generations in the name of Zionism, which has evolved into an entirely different beast since the founding of the State.

I can list dozens of erroneous decisions that conflict with my own worldview -- from the evictions of Yamit and Gush Katif -- to the refusal to allow public Jewish prayer on Har Habayit.

That doesn't stop me from throwing out the proverbial baby with the bathwater.

Jameel - why would I? I have respect for people who are willing to pay a personal price for their ideological beliefs. Goldstone benefited greatly from his ideology. It's what got him promoted from being a simple judge to being the head of some sort of Kafkaesque UN committee/kangaroo court, which I assume is quite an accomplishment in his eyes.

Jameel: That doesn't stop me from throwing out the proverbial baby with the bathwater.

I presume you mean that it doesn't cause you to do so...

Well maybe they can run a free nightly barbecue during Ramadan, it sounds like that's a crowd in which they'd be proud to do some chessed.

In fact, I think sending those kids for a sleep-over in Jenin, Gaza or wherever, can give us all a lesson in how nicely they can coexist.

Again, it comes down to whether you see not performing any type of National Service as the baby and the bathwater.

I agree, though, with the "no common denominator" assertion. But was the IDF ever the common denominator for all sectors? Plenty of Israelis don't serve (most Arabs, most Charedim, a large proportion of women, Olim over a certain age, and a whole slew of people deemed "unsuitable") so the question remains if it was ever a common denominator, or if it is a nostalgic, sentimental ambition that it could still be seen that way in today's fragmented Israeli society.

Either way (don't all my comments end up like this?) it is very depressing.