The Rambam's Visit to Har HaBayit

UPDATE: Watch the conference live on A7. 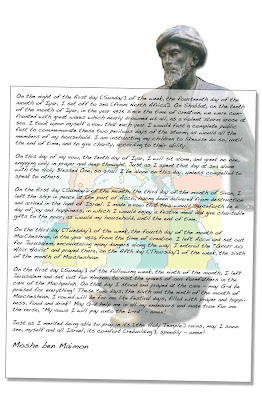 Yesterday, the 6th of the Jewish month of Heshvan, marked 843 years since the Rambam -- Maimonides, went up to the Temple Mount -- Har HaBayit, in the old walled city of Jerusalem, and prayed. In 1166 C.C, the Rambam made a pilgrimage to the Temple Mount, as well as visiting other areas around Jerusalem and Hevron.

The event was so special to the Rambam, that he vowed to make a special holiday and commemorate it annually.

The Rambam (Moshe, son of Maimon, otherwise known as Maimonides) was the physician to the Sultan of Egypt in the 12th century. His most well known work is the 14 volume Mishna Torah, (literally, The Repetition of the Torah), which was the first attempt to systematically codify the entire body of Jewish law, (halachah). This work became the basis for later codifications, most notably, the Shulkhan Arukh, written by Rav Yoseph Karo in the 16th century.

"We left Acco for Jerusalem under perilous conditions. I entered into 'the great and holy house' [the term used to refer to the Holy Temple] and prayed there on the sixth day of the month of Cheshvan. And on the first day of the week, the ninth day of the month of Cheshvan, I left Jerusalem for Hebron to kiss the graves of my forefathers in the Cave of Machpela. And on that very day, I stood in the Cave and I prayed, praised be G-d for everything. And these two days, the sixth [when he prayed on the Temple Mount in Jerusalem] and the ninth of Mar-Heshvan I vowed to make as a special holiday and in which I will rejoice with prayer, food and drink. May the Lord help me to keep my vows...." (translation, courtesy of the Temple Institute)

Tonight, Sunday evening, there will be a convention at Heichal Shlomo in Jerusalem to discuss the connection of the Jewish people to Har HaBayit. (Schedule and Agenda to be posted shortly)

So far, the list of participating rabbis includes Rabbi Nachum Rabinovitch, head of the Birkat Moshe hesder yeshiva in Maaleh Adumim, Rabbis Dov Lior, Re’em HaCohen, Yuval Cherlow, Yisrael Ariel, and others. MKs Uri Ariel, Aryeh Eldad, Uri Orbach, Michael Ben-Ari and Otniel Shneller (Kadima) will also be on hand.
Meanwhile, as the Arabs refuse to acknowledge any Jewish claim to the Temple Mount, they are continuing to riot. You can watch live rioting here via the channel 2 news live feed.

Note: I have personally never gone up to Har HaBayit, but I will be attending the lecture series this evening. 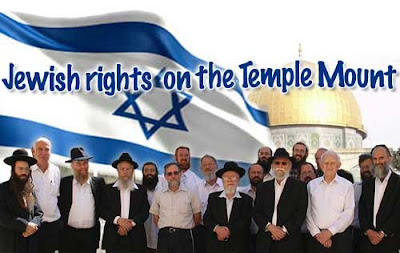 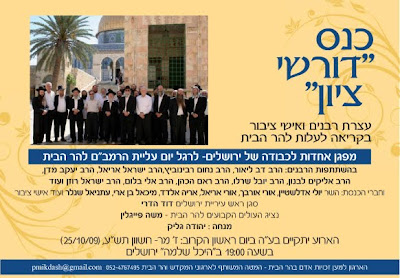 Jewish Rights and Responsibilities on the Temple Mount

Jews have the right and the responsibility to be on the Temple Mount. On Sunday, October 25, the 843rd anniversary of Maimonides historic ascent to the Temple Mount, Temple Mount activists will be meeting in Jerusalem to discuss these issues, and much more. The conference will take place at 7:00 PM in the Heichal Shlomo Hall. Click here to learn more.

Sourced from The Temple Institute

I have personally seen it with my own eyes. But I haven't and would never enter its precincts. No one knows where the Holy of Holies really is and its physical location is lost in the midsts of the time. One thing I am certain of: the Shechinah - the Divine Presence has never left it. It is significant G-d took His anger out on the offenses of the nation not upon those who were alive but upon a building. The lesson is G-d's true home is in the heart of the Jew. The Temple is the place where He is invited as an honored guest to partake in the nation's joy in gracing them with His graciousness and everlasting presence.

One day he will welcomed again to a new earthly Temple.

Jameel, I'd like to go up with you one day. I can show you around, especially the parts you can and can't go into. (Contrary to Norman, we know full well where the Kodash HaKodashim [sic- it's more than that] was, or at least where it wasn't.)

Will the violence ever end?

Those who oppose, also oppose the fact that the Rambam went up and say of course he never went up. He wrote that he did? no he didnt. he never says he went on. At best he davened in a shul overlooking or next to Temple Mount.

As Rabbi Richman said - the Rambam risked his life to travel to jerusalem to daven in a shtiebel? and then he wrote about it emotionally and made an annual seuda to commemorate the fact that he davened in a shtiebel?

Jameel - you NEVER Went up yet? Can't believe it.