The Rainbow from the Parsha 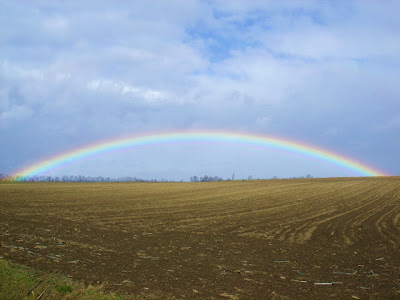 OK, this is from last week's parashat shavua (Noach, the flood parsha) but still interesting enough for a blog post.

Josh Waxman wrote on his parsha blog in 2006 about rainbows...and found the following amazing rainbow photo on snopes (its originally from National Geographic)

He prefaced it by saying that "the keshet in parashat Noach is not a typical rainbow, but an extremely rare sort of rainbow."

THIS IS A FIRE RAINBOW — THE RAREST OF ALL NATURALLY OCCURRING ATMOSPHERIC PHENOMENA.

THE PICTURE WAS CAPTURED ON THE IDAHO/WASHINGTON BORDER. THE EVENT LASTED ABOUT

CLOUDS HAVE TO BE CIRRUS, AT LEAST 20K FEET IN THE AIR, WITH JUST THE RIGHT AMOUNT OF ICE CRYSTALS AND THE SUN HAS TO HIT THE CLOUDS AT PRECISELY 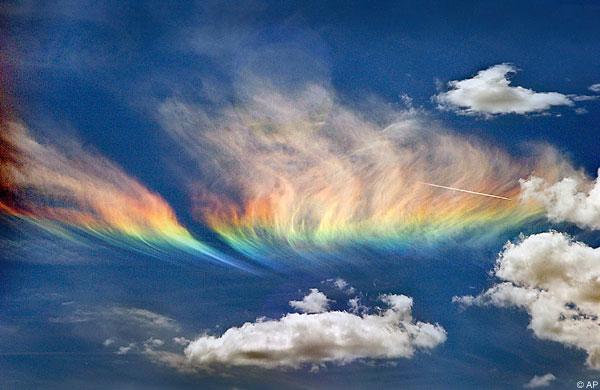 Thus, this is a real, but extremely rare phenomenon. This rainbow is beautiful. It looks like it is made of fire because it is within cirrus clouds. It looks like a celestial rainbow, from God Himself. (Thus, in the pasuk, Hashem refers to it as kashti, My Bow.)

Indeed, there is a dispute between Ramban and others (discussed in DovBear's post from 2005) whether there were rainbows before the mabul. The others maintain that it did not exist before the Flood, for God sets it as a sign with a specific import, and perhaps the simplest reading of the verse is that this is a new phenomenon. The Ramban, while admitting that this would seem to be the most straightforward meaning of the pesukim, disputes this. Based on Greek science, he states that a rainbow is a naturally occuring phenomenon, and of course there would be plenty of naturally occurring rainbows before this.

However, this past Shabbat a friend commented that the rainbow demonstrates G-d's intention not to destroy the Earth, because the bow is facing away from the ground as a sign of non-hostile intent.

Some of our common-day greetings have similar origins: 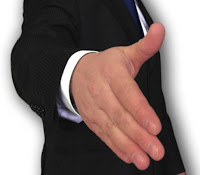 The Handshake: "The handshake is thought by some to have originated as a gesture of peace by demonstrating that the hand holds no weapon." -- wikipedia 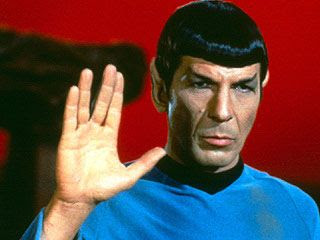 The Salute: "When men-at-arms wore armour—a friendly approach would include holding the reins of the horse with the left hand while raising the visor of the helmet with the right, so that one would know they meant not to battle them. Another theory is that the salute, and the handshake, came from a way of showing that the right hand (the fighting hand) was not concealing a weapon. A combination of showing an empty right hand, palm outwards, which was then raised formally to a helmet to raise a visor would demonstrate non-aggressive intentions, and therefore respect." -- wikipedia

Or it could have been a friendly Vulcan wishing you to Live Long and Prosper.

So too, my friend posited, the rainbow faces away from the ground...as if it were shooting an arrow away from Earth, demonstrating non-hostile intent (or peace).

That said -- there is also a an extremely rare form of rainbow which appears in nature, and would imply that when we see one of those -- G-d is not at all happy with us...because the bow is facing towards Earth -- the inverted rainbow. 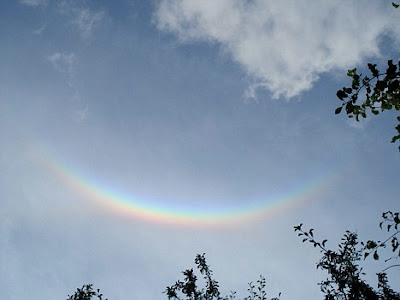 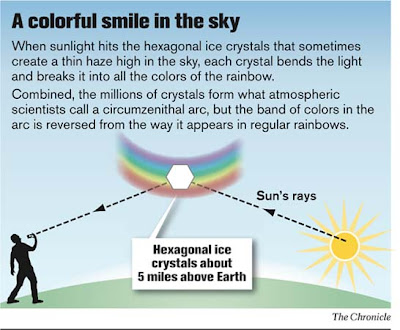 Apparently, these have been seen in the United Kingdom a few times. I wonder what G-d has against England...

You were just in the UK! How can you ask what G-d has against England?

I thought an open ended question might enlighten me to additional British quirks :-)

Just wondering. When one intends to shoot using a bow, is it not held with the bow facing towards the shooter, and pulling the bow back to release the arrow. Something like this :) (]- - - - :(
(sorry about the graphic images)

Quite an interesting post. About the inverted rainbow - when was this picture taken? and where was it taken? Was there any 'earth-shattering' event after this siting?

Curious about this in lieu of what was written about it.

Hi Dirty Shirt! Thanks for commenting!

Here's an image of bow, arrow and archer from wikipedia.

As you can see -- the string is what gets pulled back -- while the bow holds the string (there's no string/line on a rainbow...but imagine a virtual one). The arrow is placed on the string, and pulled back -- when released it flies towards the bow. Therefore, it would fly towards the "smile" of the bow (or in this case, through the smile, directly towards earth -- metaphorically speaking).

Hi Jameel. Sorry this is not related to the post, but you might seriously want to consider posting and publicizing this:

Maybe the atmosphere of the earth was different before the mabul? And maybe that atmosphere didn't have the capacity for rainbows?

BTW, Wasn't there a Bone Crusher guy on the Muqata a few years ago?

The Pictures are phenomenal.

The idea that a keshet is bow shaped doesn't fit with the fire-rainbow.