Every Sukkah an (Illegal) Outpost

There is a story that in the USSR, there was a Jew who wanted to properly celebrate Sukkot. So the Jew went and built a Sukkah on his porch. The neighbors complained. And the man didn't want to get thrown in jail for practicing Judaism, so he told the judge he built an extension to his apartment. The judge gave him 8 days to take it down.

This Sukkot tens of thousands of Jewish families have decided they will be building illegal outposts all over Judea and Samaria. 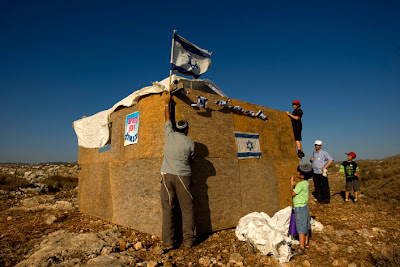 Jews all over the country have decided to help and will be selling modular illegal outposts on every street corner to help their Settler brothers maintain our hold on Eretz Yisrael.

But unlike in the USSR story, many of these Sukkot/outposts are not going to be taken down after 8 days (at least that is the plan). 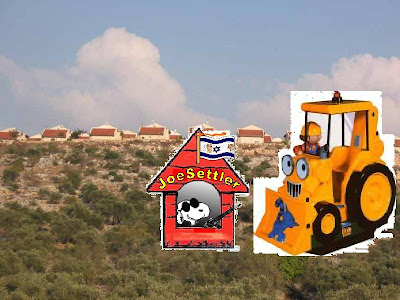 This campaign has already begun, and soon, all over the world, everyone will see Jews sitting in solidarity with their embattled brethren in Eretz Yisrael.

Think about it, where ever you are in the world, when you build and sit in your Sukkah this Sukkot, remember that you are showing solidarity with the tens of thousands of Jewish families in Judea and Samaria who are building and sitting in (Obama defined "illegal") outposts, homes, towns, and cities in Eretz Yisrael - and you will be showing everyone your support for us. 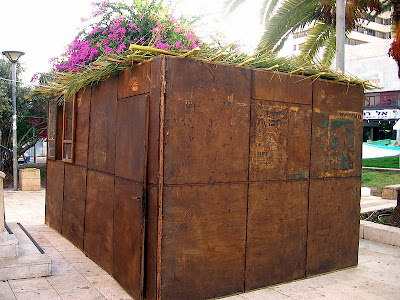 Imagine that, fulfilling a mitzvah and publicly protesting against Obama's statements - all at the same time.

Chag Sameach and thank you!

The stronger arguments are that from a legal standpoint, the settlements are illegal. (Whether or not they are historic Jewish areas or if it is fair that Jews can't live in Palestinian areas is besides the point). The fact that the settlers flout the law and the government rarely enforces it is not a convincing argument for continued settlement.

Now, there's also UN Resolution 242 which requires Israel to withdraw from territories occupied in the '67 war.

In part: "International law changed in the years World War II. By the time of the Six-Day War in 1967, acquiring territory through conquest had been banned – even if the conquest took place in a defensive war. Historical examples from earlier times – even from Israel’s War of Independence are irrelevant.

- A particularly significant change in international law was the Fourth Geneva Convention of August 1949. Article 49 bars an occupying power from transferring “parts of its own civilian population into the territory it occupies.” As the official commentary explains, this is to prevent the occupier from colonizing the occupied territory to the detriment of the population living there."

I can just imagine Dov Bear sitting in his Sukkah after reading this post and thinking to himself about the Maaris Ayin involved, as someone passing by might think he is protesting against Obama, but then realizing that no one will think that, but then again won't feel so sure, so in the end he prays for rain to avoid the problem.

OJ: Here's my friend's legal analysis (not historical) of the Geneva Convention and the administered territories.

Oh, why do you let the boring people put comments on. Who cares about their wrong interpretations of 242 181 and 000?

oj, why should UN resolutions have any power whatsoever? Is Zionism racism because the UN said so?

Jameel, the story I read was called "A Sukkah on the Roof" and was about an old Jew in New York and his grandchildren. He gives a speech about the history of Sukkot to the judge, and the judge gives him two weeks to take it down.

Nachum: I didn't post this -- JoeSettler did...and yes, I heard it was based on a story from NYC...

I also heard the version that it took place in NYC. But it seems it may just be a story after all.

Dude, Israel was created by the UN.... And if the Resolution doesn't matter, why does the Israeli government need to clarify what it means?

Also, Israel is still a signatory on the Fourth Geneva Convention of August 1949. Jameel, I took a look at your link. I think the Israeli government disagreees with that interpretation.

Jameel, I think you need a moratorium on boring commenters who feel the need to weigh down your blog with repeated-to-death misinterpretations of irrelevant UN resolutions.

O&B thanks for jumping in there. That certainly spiced things up.

You're the one beating the dead horse.

OJ: I think the Israeli government disagreees with that interpretation.

So? The Israeli government waffles on everything, anytime a new government is elected.

Sometimes they are pro settlements, sometimes anti. From a legal standpoint, despite the Israeli governments waffling, I have more than a leg to stand using my interpretation.

Ok, it's not like either of us expect to convince the other. But supposedly discussing it should nonetheless be interesting.

Jameel, I agree that what the government says doesn't make it true, but it does give that understanding of Israel's legal obligations some validity. It's not some 'fringe' idea; it's a decision by the Supreme Court.

That's my only point, that it is official Israeli policy, not just the crazy UN or anti-Israel leftists.

No Freeze Here
By Samuel Sokol

OJ: "Dude, Israel was created by the UN"

The Geneva Conventions have nothing to do with the UN, by the way. They're part of the ICRC- which, as it happens, isn't the "Red Cross" we usually think of.