Most Settlers families are large and growing (Baruch Hashem) but that presents its own unique set of challenges.

One of them is transportation.

I think you see more minivans and station wagons in the Yishuvim than anywhere else in Israel (in the Chareidi towns you'll see more vans). The Mitsubishi Space Wagon, Mazda 5, and the Mazda MPV seem to be the most popular at the moment.

Minivans as you know don't get such great gas mileage compared to Sedans. It's another expensive expense.

A recent study was done that said that (if I recall correctly) at least 50% of Israelis plan or want to buy a Hybrid (or Electric) car within the next 3 years.

The Prius is very popular in Israel and you are seeing more and more of them on the streets. But of course it only has 5 seats, and that's not enough for the typical Settler family.

Yet there are no Hybrid minivans in Israel (or in America either as far as I can tell)!

You would think that there would be. 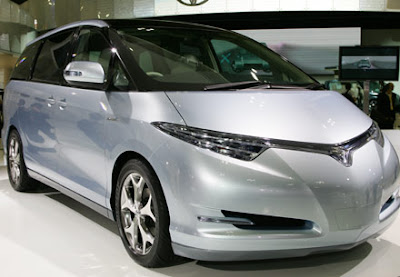 The typical family (and not just Settlers) would love to have a Hybrid minivan. A lot of driving is stop and go local, and that's where Hybrid's really shine. The gas savings would be tremendous. And to a large family that would be very significant.

So what's going on with the car manufacturers?

Is this assessment based on the fact that you never leave your yishuv? I live in Raanana and every other car is some brand of minivan. It was no different when I lived in J-m. Seriously, get a reality check before making silly statements like this.

If only every other car in Raanana is some brand of minivan, then I'm sure my statement is still true.

And beside, is that really all you got out of this post? Attacking me (again) on some piddling point you think is relevant to the actual discussion?

The point of this post is that there are no Hybrid minivans available in Israel, and if it is true that every other car in Raanana is a minivan, then there certainly would be a huge demand for them in Israel.

Another interesting point is how efficient Diesel engines are compared to the Gasoline alternative.

The minivans I've looked at lately use (as listed) something like 30%-40% less fuel per kilometer, but diesel in Israel costs around NIS 10.2 per liter vs. NIS 6.3 per liter for Benzene 95.

So any economy advantage is wiped out by price.

I've found this strange too. In the west (which after all is a far bigger market than Israel) MPV drivers typically go for all the green-middle-class guilt thing and you would think that a hybrid would be very popular. The thing is though, that hybrid car technology is a stopgap before proper electric or hydrogen cars are developed. In terms of our driving habits, almost exclusively in town, a hybrid would be excellent we'd hardly use any petrol at all, but a Prius just isn't big enough for us.

YB: From what I've been reading, modern diesel fuel is much cleaner than it used to be, and engine design also makes its exhaust as "clean" as regular gas.

A Better Idea doesn't have an electric minivan in their plans last time I checked. It's like everyone is ignoring this market.

Joe: YB's right about Diesel being more of pollutant...at least the engines we have here in Israel.

(And Abbi's right about Raanana being the minivan capital of Israel).

The only real Hybrid minivan is only due to be released in the 2012-2013 timeframe:

* Est. release date: 2012-2013
* What we know: The Toyota Sienna Hybrid is likely to be the first hybrid minivan on the market, though its introduction has been continually rumored and postponed. The Sienna Hybrid's drivetrain will likely be based on the smaller Estima minivan currently sold only in Japan. The Sienna Hybrid was set to be launched in 2010, but the economic recession put those plans on hold. According to rumors, the Sienna Hybrid will be released in 2012 or 2013. There is significant support within Toyota's U.S. division for bringing a Sienna Hybrid to market, and over 18,000 consumers signed a UCS petition to Toyota asking that a hybrid minivan be brought to America (that's over twice the 8,400 projected Estima Hybrid sales expected in Japan).

Unfortunately, that's still too small for my family.

What I personally find annoying is that minivans are taxed highly in Israel when received as a benefit from work and is classed as a high end car -- despite the fact that one may need it for basic family transportation due to larger families.

Its a punishment for having a larger family.

And if we're talking about hyrbids -- an even DUMBER thing is that when people get leased cars from the workplace, instead of the government encouraging hybrid leasing, they make the Prius in a HIGHER tax category than the cheaper, class 3 and 4 cars.

I want a Prius instead of my Ford Focus -- but I'm NOT going to be a friar and pay an extra 1000 NIS/month in tax for it.

Well, actually, the other thing I got out of this post was that the lack of hybrid minivans is some kind of nefarious conspiracy to once again punish settlers since allegedly they have more minivans (and station wagons) than anyone else on the planet.

I thought that point was equally silly, but since that was so obviously silly, I didn't think it required pointing out.

I actually know a few settlers with 4 children who (gasp!) still only drive a sedan and make do with renting when they need to get around as family. So, large families can still manage with small cars, with proper planning.

Why does not moetzet yesha take the initiative to make Jumpys gas-powered? BTW, diesel only costs 10sheks for chumps. In fact, the real price at many stations is a few agorot less than 'benzine'. And if settlers were smart, they'd register for gas company credit cards (not necessarily a pazomat/dalkan) so they could lock in the lower price everywhere and not need to carry around cash where it is needed at some places.

AND
Why do families need wasteful 'executive' minvans? Check out the new Renault Logan which is essentially a station wagon that sits 7 from the factory. It's sold at the same price as regular compacts (Mazda 3, Ford Focus, etc...) and in 2-3 years, the first used models will reach the market from the leasing fleets they are now entering.