Knesset Gym to have seperate hours for male and female MKs 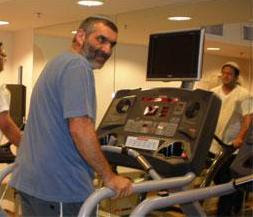 Kikar reports that due to the request from MK Dr. Michael Ben Ari, the Knesset gym/health spa will now have separate hours for male and female MKs who wish to exercise in a more modest same-gender environment.

As of next week, 2 hours a week will be allocated for male-only MKs and 2 hours for female-only MKs.

Will separate seating be next?

Now, no one has an excuse not to exercise, except for me who is too lazy to run on the treadmill.

(Though I still play an exhausting Saturday night hockey game. This past Saturday night, one of the players loudly announced, "Jameel, my arch-nemesis...bwahahahah" Good thing they put us on the same team later on in the night)

Why are my taxes paying for an excercise room for these elected officials?

Let them get a public gym membership like anyone else.

I do not regret for one second voting for Ichud Leumi this time.

Anon, whether you like it or not, or whether we admit it or not, most knesset workers work just as hard if not more than the average person. Company gyms are not just a perk, they are a legitimate facility that keeps employees healthy and motivated.

I'm honored that my hockey banter got me a shout out.